In South Lebanon III, the controversial banker will be a candidate on the Amal-Hezbollah ticket, a choice made by consensus between the political parties. 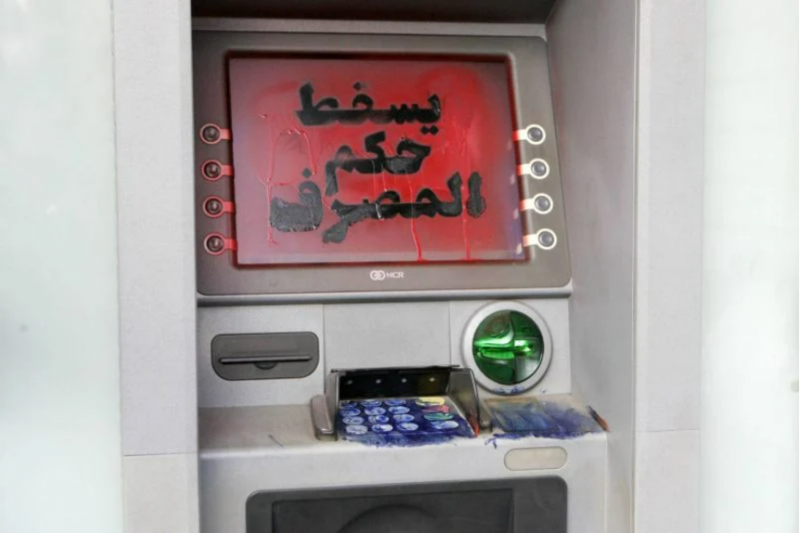 An ATM displaying “Down with the rule of the banks” during the protests in October 2019. (Credit: Marwan Assaf)

It seems like a long time since the October 2019 uprising was rumbling through a Lebanon plunged into an unprecedented financial crisis, with protesters blaming the political class and the banking sector for the country's collapse.

Today, while the Lebanese are still paying the highest price for this financial crisis, a well-known representative of the banking sector is running in the May legislative elections, backed by this same political class.

Marwan Kheireddine, former minister of state, chairman of the board of Al-Mawarid Bank and a former member of the board of the Association of Banks in Lebanon, is running for the Druze seat of Marjeyoun-Hasbaya, in the South Lebanon III constituency.

Kheireddine is a particularly controversial figure, particularly because of his staunch defense of financial interests.

In November 2019, as the national currency began to fall against the greenback, the banker had robustly encouraged his clients to withdraw their deposits in Lebanese lira. The name of this businessman also appeared in the “Pandora Papers,” the massive leak related to tax havens in 2021.

According to the data from this investigation conducted by the International Consortium of Investigative Journalists (ICIJ) in partnership with 150 international media outlets and made public in October 2021, Kheireddine owns two offshore companies in the British Virgin Islands.

These are Oakwood International Holdings Limited, formerly associated with the son-in-law of an international drug trafficker from India, and Driftwood Limited.

The latter was used in April 2019 by Kheireddine to buy a yacht worth $2 million.

Journalist Mohammad Zbeeb filed a complaint last week against a supporter of Kheireddine's who is an employee of al-Mawarid Bank on charges of death threats and infringing on his civil rights, after the man allegedly posted threats to attack Zbeed if he continuing criticizing Kheireddine. The man allegedly threatened to repeat a 2020 incident in which Zbeeb was attacked and beaten after a speaking engagement in Hamra by three men who worked as bodyguards for Kheireddine.

Despite his controversial profile, Kheireddine enjoys the support of the main political parties in his battle in South III (Nabatieh, Bint Jbeil, Marjayoun-Hasbaya) for a parliamentary seat.

“Killon yaani killon” (all of them means of all of them, the flagship slogan of the 2019 protest movement, referring to the political class) support his candidacy: the Amal movement of Parliament Speaker Nabih Berri; the Lebanese Democratic Party of the pro-Syrian Druze leader Talal Arslan, who is Kheireddine's brother-in-law; Hezbollah and even the Progressive Socialist Party of Arslan's rival Walid Joumblatt.

These political parties said that the candidacy of Kheireddine is the result of a consensus.

“We supported his appointment because of the cordial relations that unite us with both Kheireddine and Berri,” he added.

Meanwhile, Berri's entourage said that the candidacy of Kheireddine was the result of an agreement between the political forces.

“We have the approval of the two Druze leaders, Arslan and Joumblatt [although the two men are rivals on the Druze scene],” said a source close to Ain el-Tineh, Berri's residence.

In the past, Berri accused bank owners of “transferring billions of dollars abroad” and had threatened banks with “legal action” if they did not apply the so-called “student dollar” law authorizing transfers of foreign currency to pay tuition of Lebanese students studying abroad.

"Marwan Kheireddine is not our candidate. But we do not have the capacity to present someone in South III, and we respect the influence of Nabih Berri in this area," said Saleh Hadifeh, head of the PSP electoral machine.

South III is indeed a constituency with a Shiite majority (79 percent), with the Druze representing only 4 percent of registered voters. Will Joumblatt's party still ask its members to vote for Kheireddine?

“The question has not yet been decided,” Hadifeh said.

“Party of the Banks”

What about Hezbollah, known for its harsh rhetoric toward the banking system? In late January, the head of the Party of God's parliamentary bloc, Mohammad Raad, accused banks of “mismanaging and neglecting the money of the Lebanese.”

In May 2019, party leader Hassan Nasrallah slammed bank owners, calling on them to play their role in “safeguarding the country's economy.”

Kheireddine will be a candidate on Hezbollah and Amal's joint list. In 2018, this joint list dubbed “Hope and Loyalty” secured all the seats to be filled (eight Shiite, one Sunni, one Druze, one Greek Orthodox), with 86 percent of the vote.

“This is a clear example of the overlap between the banks and the traditional parties,” said a member of the Union of Depositors, an association that advocates for an end to the unofficial capital control by the banks, speaking on condition of anonymity.

He is joined by Nizar Rammal, a candidate in South III supported by the opposition group Citizens in a State (MMFD), which is leading a campaign on social networks against Kheireddine's candidacy.

“This time, the political class has at least the merit of having chosen clarity. They are presenting, in all transparency, a candidate who will only protect the interests of the banks, which hold the savings, retirement, and health contributions of the Lebanese," said Rammal.

In Lebanon, the common interests that exist between the banking sector and politicians have given rise to the term “the party of banks” among some opposition groups to refer to the political class.

For Kheireddine's sponsors, this controversy has no reason to exist.

“Mr. Kheireddine is known for his transparency and fully recognizes his responsibility in the crisis, in addition to being from an important Druze family in Hasbaya,” Haidar said.

“Moreover, it is not as if he is the only banker who is involved in politics. Leaders of much larger institutions are fielding candidates in their names or are running as independent,” he added, in reference to Antoun Sehnaoui, CEO of SGBL bank, who is indeed supporting candidates in Beirut I.

Similarly, outgoing Druze MP for Hasbaya, Anouar el-Khalil, whom Kheireddine is called upon to succeed, is himself a member of the board of directors of Bank of Beirut.

But today in Lebanon, can a banker participate in the economic reconstruction of the country?

“When there is a crisis, all stakeholders come together to discuss. You can't dismiss anyone,” Haidar said.

For Rammal, however, the situation is much more complicated.

“We need to reform the banking system so that it can finance the economy and its development, and not to benefit the rentier class. It is also clear that Mr. Kheireddine will be responsible for overseeing the interests [of the latter] in Parliament,” he said.

Contacted by L'Orient-Le Jour, Kheireddine was not available for comment.

On Hezbollah's side, things are perceived from a different angle.

“The party does not have a personal problem with Marwan Kheireddine. The issue of the banks and reforming the banking sector is the responsibility of the state," said Kassir.

Nasrallah said last Wednesday that the battle of his party is also to “make sure” his allies “win” too. Even if bankers are among them.

This article has been updated to include information about the complaint filed by Mohammad Zbeeb against a supporter of Kheireddine.

It seems like a long time since the October 2019 uprising was rumbling through a Lebanon plunged into an unprecedented financial crisis, with protesters blaming the political class and the banking sector for the country's collapse.Today, while the Lebanese are still paying the highest price for this financial crisis, a well-known representative of the banking sector is running in the May...