Verena El Amil: The 25-year-old ready to throw her hat into the ring

A graduate from Beirut’s Saint Joseph University’s Huvelin School of Law, the young candidate wishes to represent “the generation of change” in the May legislative elections. 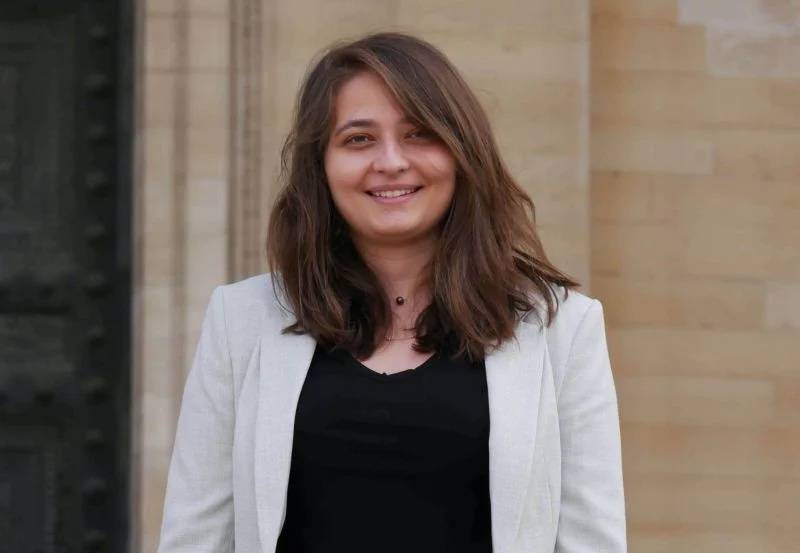 Verena El Amil, 25, is among the youngest candidates for the next Lebanese legislative elections. (Photo provided by the candidate)

“That is extremely refreshing.” “Thank you for reminding us that we can.” “Yes! Finally something to look forward to.” “True representative of the youth.”

This is a sample of how some Lebanese on social media welcomed the news that Verena El Amil, 25, would stand in the parliamentary elections slated for May 15.

A few minutes only before the closing of registration on March 15 at midnight, Amil, one of the youngest candidates in the elections, decided to run for a Maronite seat in Metn (Mount Lebanon II).

She is one of 155 women who will compete in the electoral race for which some 1,043 candidates have signed up.

“I am 25 years old, and I am still in this country because I believe in change and because there’s still hope,” Amil told L’Orient-Le Jour.

Behind the soft drawl and remarkable modesty of this young woman, hides a fierce activist. She was among the youth who went to the streets during the Oct. 17, 2019 popular uprising and even became a key figure among the protest groups.

Amil has been invited to appear on international TV channels on several occasions and has become an emblematic spokesperson for this young generation with a burning desire to change the current political establishment, which it accuses of having plunged the Lebanese population in the worst economic crisis in their history.

Fervently indignant with ‘a rebellious spirit’

But why her? According to her entourage, this quadrilingual graduate with a master’s degree in law (business law at Saint Joseph University and comparative law at Paris 1 Panthéon-Sorbonne), and a member of the Beirut Bar Association, is a brilliant speaker. She stands out for her combativeness, her tireless convictions and especially her eloquence.

“She knows how to put political words on what the youth want and feel. She has a well-constructed reasoning, and she knows how to make connections. We recognize ourselves in her,” says journalist Arthur Sarradin, writer of the documentary La révolution naît des entrailles du chagrin [The revolution is born from the womb of sorrows], in which the young candidate is one of the subjects.

It must be said that the activist’s political awareness and interest in history did not start with the 2019 thawra (revolution). In 2018, she was already responsible for the political aspect of the campaign of Gilbert Doumit, a candidate for the last legislative elections in Beirut I on the ticket of Li Baladi, a civil society group.

“I don’t know, I had the knowledge, I was clear in my mind,” she answered shyly when asked how she could have been given such a mission at only 21 years old.

She did not comment and quickly changed the conversation when asked about her meeting with UN Secretary-General Antonio Guterres during his visit to Lebanon last December.

Without a doubt, Amil does not like the spotlight. But she is proud to say that she has always been fervently indignant “with a rebellious spirit.” As a child, this former student of a school run by nuns could not stand injustice and knew that she would denounce it when she grew up.

“I organized my first demonstration at school when I was eight years old. The whole class was behind me. I was a troublemaker,” she said as her green eyes crinkled up, giving her a laughing Buddha look.

Her family, originally from Rmeich in South Lebanon, raised her in an environment disinterested in politics, she said.

University as the first political arena

Joining the USJ law school on Huvelin Street was a turning point for the young woman. There, in 2017, she founded the Taleb' movement (meaning in Arabic both a student and calling for), which established itself as a political alternative within a highly polarized university.

“We had a choice between March 14 or March 8. For me, that was unacceptable. The university then became a real opportunity to do political work and to apply everything I thought of. Like during the period of May 1968 in France, I was convinced that the student movement could change things.”

Amil was right. Her movement, which fought political confessionalism, advocated social justice, secularism, equal rights for men and women, defended LGBT rights and denounced the kafala system, had an incredible impact at the time of the revolution.

In 2020, while she was serving as president of the USJ secular club, Taleb won eight out of 13 seats in the law school’s student elections.

Today, the movement has spread to all USJ faculties and has 98 seats.

“Initially, spreading progressive ideas at a university like USJ, where the traditional parties are very established, seemed hopeless. But I believed in it, and we worked tirelessly. Today, defending secularism and human rights at USJ has become almost mainstream,” said the woman who knows that the battle will be harder now that she has moved into the legislative arena.

Encouraging the youth to get involved in politics

When asked why she chose the Metn-North constituency, Amil became a little embarrassed. She had initially been announced as the Madinati movement’s candidate in Beirut I, since she was very active in the electoral campaign for the constituency during the previous elections and is well known in the student movements of the capital.

“I did not want my candidacy to be a cause of discord. To facilitate the formation of a unified list in Beirut I, I decided to fight my battle in the Metn where I was born and live,” she said.

She was referring to the battle between the two opposition groups Madinati and Watani over who should be nominated for this crucial constituency.

On social media networks, personalities such as journalist Dima Sadek have accused MP Paula Yacoubian of the Watani movement of being behind the pressure on el-Amil to withdraw in favor of Yaacoubian’s preferred candidate for the Maronite seat in Beirut I, Ziad Abi Chaker, an engineer and environmentalist.

At bay from controversy, Amil is now focusing on her main objective: to bring together the youth and encourage them to get involved en masse in building a new Lebanon.

“She is young, she is a woman, and she is in contrast with this tribal way of doing politics,” Aya Abou Saleh, a student of public law at USJ, told L’Orient-Le Jour.

Amil is pleased that she has already achieved a victory. “When I announced my candidacy, a lot of young people who had sworn to abstain from voting told me that they now feel concerned and are asking me how they can help.”

This article was originally published in French by L'Orient-Le Jour. Translation by Sahar Ghoussoub.

“That is extremely refreshing.” “Thank you for reminding us that we can.” “Yes! Finally something to look forward to.” “True representative of the youth.”This is a sample of how some Lebanese on social media welcomed the news that Verena El Amil, 25, would stand in the parliamentary elections slated for May 15.A few minutes only before the closing of registration on March 15 at...