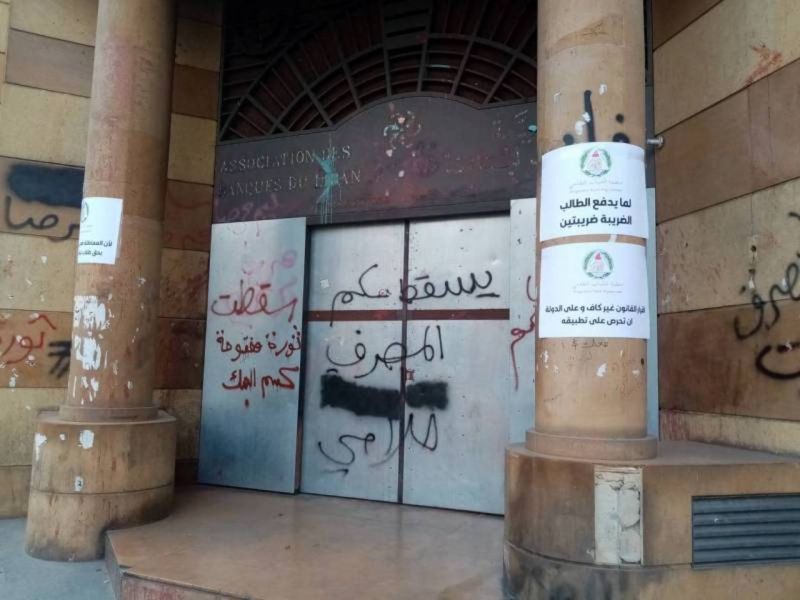 The entrance of the Association of Banks in Lebanon in Beirut. (Credit: M.A./OLJ)

BEIRUT — The Association of Banks in Lebanon announced Friday that banks will close for two days Monday and Tuesday in a "warning strike" in response to increasing legal pressure on the sector. Meanwhile, Prime Minister Najib Mikati has called for a cabinet meeting Saturday at 10 a.m. to discuss the tensions between the judiciary and the banking sector.

• In its announcement of the two-day stoppage, which followed a meeting of the association earlier in the day, ABL called it a "warning strike against the abuse of financial policies," adding, "The Lebanese banks can no longer tolerate the arbitrary decisions that they are dealing with from all sides and which are exploited by some ill-intentioned people to put them in confrontation with depositors."

• The statement took shots at the government for the "continued absence of the capital control law and the [lack of] approval of a recovery plan" to get the country out of its economic slump, but also pointed a finger at the central bank, noting that banks had been faced by angry depositors unable to withdraw their salaries in local currency "as banks were deprived of the cash liquidity that would allow them to meet their requests to collect their salaries in cash." It added, "How can the banks fulfil [the depositors'] requests, when they do not print the lira, if they do not obtain them from Banque du Liban?"

• The planned strike comes at a time of increased pressure on the banks from the judiciary. On Mar. 14, Judge Ghada Aoun froze the assets of five top Lebanese banks (Bank of Beirut, Bank Audi, SGBL, Blom Bank and Bankmed) and members of their boards while she investigates their transactions with the central bank. She also issued travel bans against the heads of the boards. Then on Mar. 17 Judge Aoun issued another ruling, freezing all the assets of Creditbank and banning its chairman Tarek Khalife from leaving the country.

•  On Mar. 16, Judge Mariana Anani issued a ruling freezing the assets of Fransabank on the back of a lawsuit filed by a depositor.

•  On Mar. 18, Judge Bassem Nasr issued a ruling to freeze the assets of the branches of Blom Bank in Tripoli.

•  Paul Doueihy, founder of Macro Thinkers, an economic think tank, told L’Orient Today “The crisis has reached a new level and I expect it to crescendo from here. There is no way of knowing what will happen to the exchange rate, but the whole country will be paralyzed, and it will be very difficult to weather the repercussions of a prolonged strike.”

•  Karim Gebara, the head of the Syndicate of Pharmaceutical Importers, said “If the strike happens, this will complicate things for subsidized drugs, because they follow a specific payment process with local banks and the central bank. As far as non-subsidized drugs [are concerned], we can use international banks, but I don’t think we can open accounts in a very short period. The whole Lebanese economy will be blocked, I hope this doesn’t happen.”

•  “You already have a mostly cash economy given that supermarkets, pharmacies etc. are no longer accepting cards, given the fees imposed and the delayed payment by credit card companies. [The] main impact is on [the] payment of salaries but that happens at the beginning of the month. [It ] could have an impact on the USD rate, given increased uncertainty”, commented a senior economist, who preferred to remain anonymous.

• On the other hand, the head of the Syndicate of Supermarket Owners Nabil Fahed said there should be little impact on the supermarkets if the strike lasts only two days.

•  The impact on the exchange rate will be felt, since Circular 161 will be short circuited, and the central bank will lose the distribution channels to conduct its intervention in the currency market. The lack of access to the US dollar banknotes through the banks will greatly pressure the lira in the parallel market and will widen the gap with the Sayrafa rate.

•  After his meeting with Justice Minister Henri Khoury, Mikati said, “It is important to preserve the independence of the judicial branch, …but some judges are igniting tensions, and these are being exploited for the sake of election campaigns” … “We call on judicial authorities to take the initiative and correct these actions that have a devastating effect on the judiciary, first, and, second, on one of the pillars of the Lebanese economy.”

• Since Thursday, the lira has been trading three percent lower against the US dollar, at LL23,500.

BEIRUT — The Association of Banks in Lebanon announced Friday that banks will close for two days Monday and Tuesday in a "warning strike" in response to increasing legal pressure on the sector. Meanwhile, Prime Minister Najib Mikati has called for a cabinet meeting Saturday at 10 a.m. to discuss the tensions between the judiciary and the banking sector.Here’s what we know:• In its...