For a resident of Tripoli, heating has become "an inaccessible dream." Many people, especially in the poor districts of the North, experience the polar cold without the means to cope 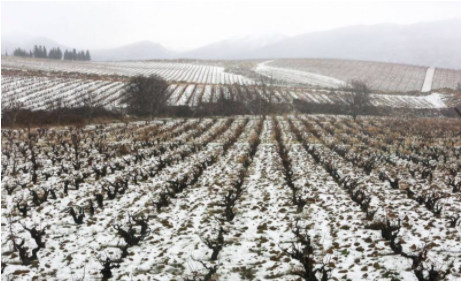 A vineyard covered by snow in Kefraya, in the Bekaa. (Credit: Aziz Taher/Reuters)

"Heating has become an unattainable dream for my children in the last month," said Umm Ahmad. She lives in Tripoli's Souweika neighborhood, one of the poorest districts in the city, and is among the majority of Lebanese who can no longer afford to heat their homes properly, and who have been hit hard by the storm that has been blowing across the country for the past two days.

"We cannot use electric heaters because we could not renew our subscription to the generator. We are now being charged $75 for 5 amps," the mother told our correspondent. In Tripoli, the largest city in North Lebanon, the poorest neighborhoods are suffering from the cold, especially since most of the inhabitants have canceled their subscriptions to private generators amid soaring rates. "Heating with gas is also difficult because a tank of gas costs LL400,000, which is equivalent to the monthly salary of my oldest son who works in a bakery," adds Oum Ahmad.

In the popular neighborhood of Bab el-Tabbaneh, the Zakhoury family is experiencing the same suffering with the arrival of the cold. "The water seeps in because the walls are cracked and repairs are very expensive. We are always wrapped up in blankets," says Naji Zakhoury, the eldest of the family, who now burns paper and some branches to keep warm. 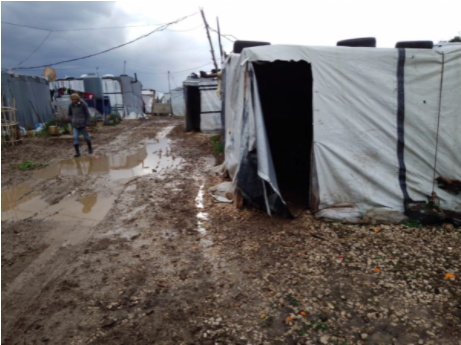 Called “Hiba,” the storm that has been hitting Lebanon since Tuesday night continues to rage throughout the territory. Since yesterday morning, heavy snowfalls have enveloped villages at 700 meters above sea level, making several roads inaccessible. The bad weather has also caused extensive damage to some agricultural fields.

In Akkar, a particularly poor and rural region, strong gusts of wind blew down trees and billboards, and the snow was very deep in the mountains. With temperatures close to zero, families in the region who were unable to buy diesel or wood to keep warm had an extremely difficult night. This was especially true for the many Syrian refugees in the area, who were living in tents that were literally drowning in mud and exposed to wind, rain and snow.

Hussein Abdallah, a Syrian refugee living in an informal camp in Sammouniyeh in Akkar, dreads the floods that make the camp floor muddy and drown the tents. "The situation is extremely difficult. Our tents cannot withstand the torrential rains", he confided to our correspondent in Akkar. Alia Faycal, a refugee and single mother of six children, is also struggling to keep warm. "The weather conditions are disastrous and the prices of fuel and wood are high, and we have limited means," she says.

Amid the crisis, the citizens of Akkar share the same misery as the refugees. "Poverty is almost universal today. Most of the inhabitants now need assistance," says Ghassan Hosni, a grocer in Bebnine.

The same ordeal is endured by small producers. In Akkar, several chicken farmers found many dead chickens yesterday morning because of the cold, being unable to heat their coops. In the coastal regions of the area, the rapid rise in the level of the Nahr al-Kabir River has led to fears of floods that could inundate agricultural fields and surrounding villages. In fact, many crops were damaged yesterday due to the ice.

The economic collapse is also felt in public institutions: in the village of Qobeiyat in Akkar, the local authorities asked residents in a statement issued yesterday to avoid going to the surrounding mountains because of the inability to rescue them if they are blocked by snow. "The vehicles of the Civil Defense and the Ministry of Public Works are broken down," they admitted.

The electricity grid has not escaped the crisis either. In Zahle, in the Bekaa, the private Electricity of Zahle (EDZ) revealed that the city's electricity network "collapsed" on Tuesday night, due to high power consumption. EDZ called on residents to avoid "using too much electric heating" in order to not overload the network. 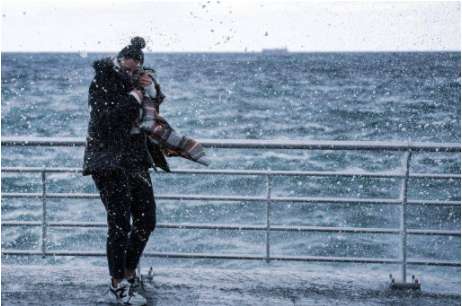 A walker splashed by the waves on the Corniche in Beirut. (Credit: Mohammad Yassine/L'Orient Today)

The snow had also frozen traffic yesterday in the mountains, and many schools, such as in Baalbeck and Dennieh, had closed their doors. The Public Works Ministry also announced that its teams had begun clearing the mountain roads at 4 a.m. It called on citizens to avoid going to the mountains. The Traffic Management Center (TMC) also asked motorists not to park their vehicles near trees, billboards or the seashore, given the strong wind gusts.

In the only district of Bsharri, the snow has covered most of the villages at 700 meters above sea level, reports the National News Agency. Covered with one meter of snow, the road from Bsharri to its nearby cedars was completely blocked yesterday morning, as well as the roads of Hadath al-Jibbeh, Tannourine and Ainata.

The National News Agency also reports that other roads across the territory have become impassable due to snowfall: Ainata - Arz, Ouyoun el-Simane - Hadath Baalbeck, el-Mnaytra - Hadath Baalbeck, Aqoura - Hadath Baalbeck, Jurd Marbine - Hermel, Hermel - Sir Dennieh, Maaser al-Chouf - Kefraya, Tannourine - Laqlouq, Tannourine - Jebbe. In the Bekaa, snowfall was observed from 900 meters above sea level, according to our correspondent. The roads in the region were completely blocked above 1,500 meters. Teams from the Public Works Ministry were responsible for clearing the main roads in the villages of Ainata, Deir al-Ahmar and Yammouneh. In Hermel, most of the roads were blocked by snow, including those linking the region to Qobeiyat, Meshmesh and Dennieh.

In the South, our correspondent reports residents of the region were extremely concerned on Tuesday evening because of the high winds. The fishing and commercial ports of Sur were closed yesterday. In this coastal city, many agricultural fields and greenhouses were also damaged.

"Heating has become an unattainable dream for my children in the last month," said Umm Ahmad. She lives in Tripoli's Souweika neighborhood, one of the poorest districts in the city, and is among the majority of Lebanese who can no longer afford to heat their homes properly, and who have been hit hard by the storm that has been blowing across the country for the past two days."We cannot use...