Is tension between the Lebanese Forces and the Future Movement flaring ahead of parliamentary elections?

While the two former allies appear to engage in one-upmanship in the run-up to the parliamentary elections, neither side wishes to pass the point of no return 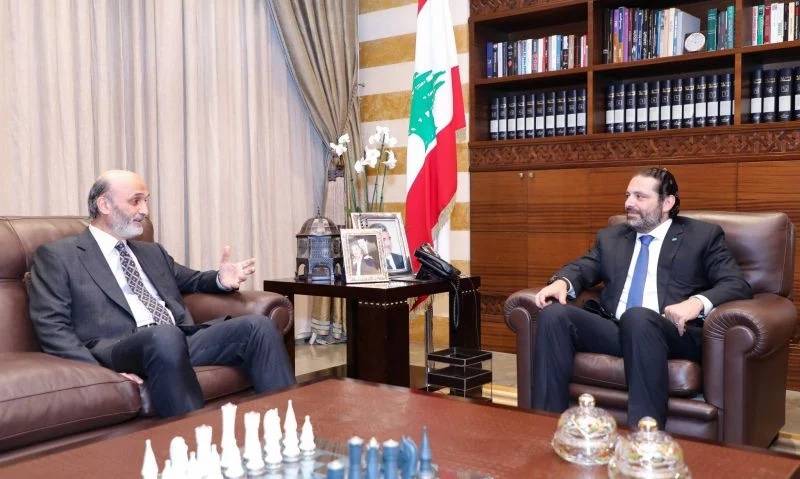 Nothing seems to be going right between the two old allies of the March 14 camp.

On Jan. 5, Lebanese Forces leader Samir Geagea said in a tweet, “the Sunni majority is [his] natural ally at the popular and not leadership level.”

The response was immediate. Geagea made a distinction between the Sunni leadership and Sunni community, in which the Future Movement’s leadership is increasingly contested — a statement that raised the ire of the party’s secretary-general, Ahmad Hariri.

“Listen to the advice of a former ally. Play in your own court all you want, and live your dreams, but leave the Sunni majority alone,” Hariri said in a Jan. 6 tweet.

“The Sunnis are not with you,” Haitham Moubayed, a member of the Future Movement’s politburo, also snapped in response to Geagea’s tweet.

These negative reactions can be explained by the fact that the LF has been openly courting the Sunni community, which until recently was almost completely under the Hariri family’s thumb.

“Officially, the Future Movement presents itself as a liberal party that transcends sects. But Ahmad Hariri’s statements clearly show the worst part in our political system: political competition must be based on sectarianism, with each party having its ‘own court,’” Karim Bitar, a political commentator, told L’Orient-Le Jour.

But since the gunfight that took place in Beirut’s Tayyouneh district in October 2021 between armed men presumably close to the LF and supporters of Hezbollah and the Amal Movement, Geagea has not been far away from the Sunni “court.”

The LF leader is, in fact, perceived by a portion of the Sunni community as the only man capable of standing up to Hezbollah, after a modus vivendi that has been in place between the Sunni leadership and the Shiite party.

During a protest in October 2021, in support of the LF, many Sunnis joined the crowds, with some even claiming to be party members.

Portraits of Geagea can also be seen hanging in Tripoli, a city known as a crucial Sunni reservoir for the Future Movement.

“What is happening is merely individual political posturing, just for show,” Abdel Salam Moussa, the Future Movement’s spokesman said. For him, the LF cannot have a foothold in Sunni areas.

The LF is ‘not a church’

One of the main obstacles to the LF mobilizing the Sunni street is the violent past of the party and its leader.

The ‘hakim,’ or doctor, as Geagea is nicknamed, was accused of assassinating former Prime Minister Rachid Karameh, who was particularly popular in Tripoli.

In this vein, Othman Alameddine, an MP for the Future Movement in North Lebanon, was quick to remind Geagea of the “blood” he has on his hands and the “role” of Saad Hariri in his release from prison back in 2005.

For Moussa, however, if the LF managed to gain the sympathy of some Sunnis, it is first and foremost thanks to the Christian party’s close ties with Hariri.

Meanwhile, the LF brushes aside these comments, refusing to limit itself to Christians only.

“We are not a church. We are a national political party that is open to everyone without any discrimination,” Charles Jabbour, an LF spokesman, told L’Orient-Le Jour, adding that Sunni MPs might run on LF lists in parliamentary elections slated for May 15.

“We might forge alliances with Sunni figures for the upcoming elections, who would join our parliamentary bloc, if they were elected,” he said.

The falling out between the two parties is not just a matter of election alliances.

“There has been stiff competition between the two sides. Losing Saudi support in favor of the LF was a bitter pill to swallow for the Future Movement,” Bitar said.

Saad Hariri drew the wrath of Riyadh over his lenient policy regarding Hezbollah. In a bizarre sequence of events in November 2017, Hariri, who was then prime minister, was said to be held in Riyadh, coerced to resign from his post and only released after intense French diplomatic lobbying.

Meanwhile, Geagea has been increasingly highlighted as the kingdom’s man in Lebanon. Two years after the forced resignation episode, and with the outbreak of the Oct. 17, 2019, uprising, the LF abandoned Hariri by resigning from his government.

Ever since, the bitterness has only increased, especially when the LF refused to name Hariri as head of government during parliamentary consultations in October 2020.

“We supported Samir Geagea’s candidacy for president throughout 44 parliamentary sessions, until he let go of the idea as part of his deal with Michel Aoun. The LF did not return the favor. They respected neither the alliance with us nor our position within the Sunni community. One could say it’s a Gebran Bassil-style approach,” Moussa said.

One year after he stepped down in the aftermath of the 2019 popular uprising against the political class, Saad Hariri presented himself as the “natural candidate” for the premiership — a position that Bassil brushed aside.

At the time, the LF, believing that “change was not possible,” with Hezbollah being allied with the majority in Parliament, also refrained from participating in Hariri’s government, which allowed the latter’s rival President Michel Aoun and his Free Patriotic Movement to be the largest representatives of Christians. A few months later, the then prime minister stepped down.

However, the bridges between the two sides are not completely burned. LF and Future Movement candidates could still run on the same lists in May.

The Future Movement’s participation in the electoral race remains uncertain, as ambiguity continues to surround Saad Hariri’s decision to enter the fray, or not.

“Everything is possible in politics. For the moment, it is still very early to talk about the elections. We are still waiting for Hariri’s return [to Lebanon]. But if we manage to reach an agreement with Geagea, then why not,” Moussa said.

“Maybe the LF leader just misspoke [in his tweet]. Look at the statements of LF MP for Jbeil, Ziad Hawat, who tried to straighten things out, stating that the alliance and political agreement with the Future Movement were not at all out of the question,” he added.

The LF and the Future Movement can hardly do without each other, with their alliance being key in mixed constituencies such as Chouf-Aley (Mount Lebanon 4), Akkar (North I), Zahle (Bekaa I), and Saida-Jezzine (South I).

In the 2018 elections, the list comprising the LF, Future Movement and the Progressive Socialist Party of MP Walid Joumblatt in Chouf-Aley won a landslide majority, securing nearly 60 percent of votes and nine out of 13 seats in Parliament.

“The Chouf-Aley area is special. We have accepted the hand extended by Walid Joumblatt and the PSP and are ready to discuss an alliance. Haririan candidates are welcome to join us if they wish so. For other areas in which only the Future Movement and the LF are running on the same list, we will have to wait for [Saad] Hariri’s decision first, and study the situation and see if a political agreement could be possible with him,” Jabbour said.

Nothing seems to be going right between the two old allies of the March 14 camp.On Jan. 5, Lebanese Forces leader Samir Geagea said in a tweet, “the Sunni majority is [his] natural ally at the popular and not leadership level.”The response was immediate. Geagea made a distinction between the Sunni leadership and Sunni community, in which the Future Movement’s leadership is increasingly...