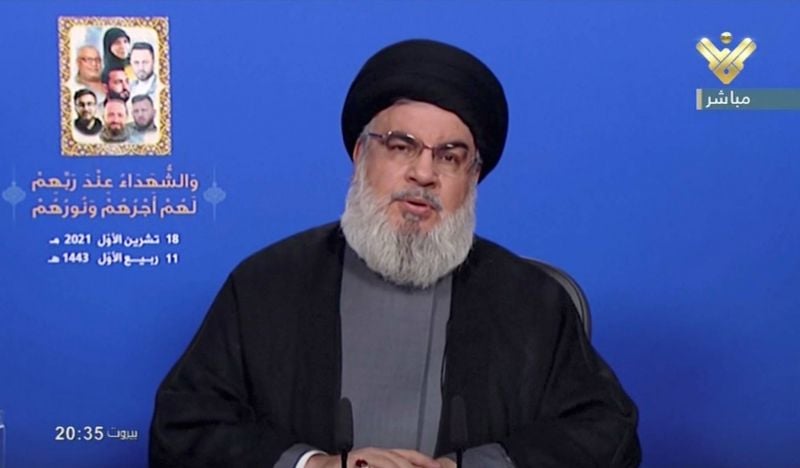 In Hezbollah’s rhetoric, there is no such thing as defeat. Its victories are proof of its military superiority. Its setbacks serve to fuel beliefs in martyrdom, glorifying men who die in combat — a concept deeply entrenched in the mindset of the party’s supporters.

It is according to this logic that Hezbollah leader Hassan Nasrallah delivered his speech on Monday, commenting on the bloody clashes that erupted in Beirut’s Tayyouneh area on Oct. 14 between Amal Movement and Hezbollah supporters, and armed men allegedly belonging to the Lebanese Forces. (The LF has denied involvement.)

Nasrallah began his speech by flaunting his party’s strength, claiming for the first time that Hezbollah has “100,000 fighters” — saber-rattling to frighten his adversary, and also to reassure his popular base.

He then moved to play the victim card, reviving a discourse that has long been central to the party and crops up every time things get more complicated for the party on the national stage.

Hezbollah has been confronted with three delicate situations in the span of a few months — something that highlights the deterioration of its relations with other communities in the country.

On Aug. 1, clashes erupted between members of a Sunni tribe in Khaldeh after gunmen opened fire on a funeral procession for a Hezbollah member.

Less than a week later, on Aug. 6, the residents of the predominantly Druze village of Shwaya stopped a Hezbollah truck with a missile launcher and detained party members. And finally, the Oct. 14 shootings took place in Tayyouneh.

Previously, the Shiite party has managed to emerge stronger from similar security incidents it was directly involved in.

On Sept. 13, 1993, the Lebanese Army opened fire on a Hezbollah demonstration in Beirut’s southern suburbs. At the time, Hezbollah had just begun to engage in politics. The clashes, in conjunction with an agreement with the Syrian government, which was an influential occupying power back then, allowed it to gain more ground.

In 2003, another similar scenario played out. In the aftermath of clashes with the army that left several victims in the Beirut southern suburb of Hay al-Sellom, Hezbollah once again strengthened its ties with Syria — paving the way for the party’s participation in the government for the first time in 2005.

In 2008, the Shiite militia faced off against the army once more. Then-army head Michel Sleiman was forced to apologize to Hezbollah’s and Amal’s leaders, while army officials and soldiers were punished. This was translated politically into the 2008 Doha Agreement, which granted the Shiite party a blocking third, or effective veto power, in government.

The deal came after the May 7 events of the same year, when Hezbollah operatives invaded neighborhoods in Beirut and the Chouf District.

‘There is no way the party would fall into this trap’

Hezbollah is once again seeking to politically turn the latest security incidents to its advantage. It does not wish to continue any military escalation, but rather to undercut LF leader Samir Geagea’s position in his standoff with Gebran Bassil, the Free Patriotic Movement leader and an ally of Hezbollah.

For Hezbollah, it is imperative to thwart what the party considers a plot led by the United States with the help of Saudi Arabia and the LF.

“The clashes in Shwaya, Khaldeh and Tayyouneh were planned. The goal was to sow discord among Lebanese communities in a bid to reach a new political agreement that would push Hezbollah to surrender,” a Hezbollah official told L’Orient-Le Jour.

The party of God has long based its analysis of local events on conspiracies.

“Other, similar clashes are going to happen in the future. But there is no way the party would fall into this trap,” the source added.

Hezbollah now has a clear objective: to undermine the LF ahead of the legislative elections slated for the spring of 2022.

The pro-Iranian party appears to believe that the LF currently has the upper hand among Christians and is the only party that is able to challenge its domination.

In an attempt to change this dynamic, Hezbollah first considered recourse to the judiciary, to demand that the Court of Justice dissolve the LF and prosecute Geagea.

It discarded this option for several reasons, however, primarily because the current context is no longer the same as in the 1990s.

In 1997, the Court of Justice sentenced Geagea to death for a deadly bombing of the Lady of Salvation Church in Zouk, Kesrouan; this sentence was later commuted to life imprisonment. The LF leader had to wait for Syria’s withdrawal from Lebanon in 2005 to get out of prison, when he was granted amnesty.

Lebanon is no longer under Syrian tutelage, and Geagea currently enjoys a certain popularity among Christians. Any recourse to the courts could have strengthened his position.

Hezbollah has thus decided to wage a political battle with Geagea, a few months in the lead-up to the parliamentary elections slated for March 27.

Hezbollah seeks to isolate the LF to avoid a scenario that would see the Christian party emerge stronger from the upcoming elections.

In his long speech on Monday, Nasrallah did not hold back on tarnishing Geagea’s image among Christians and Sunnis by recalling the forced resignation of former Prime Minister Saad Hariri in 2017 from Riyadh, arguing that the LF leader was not hesitant to call for parliamentary consultations to appoint a new premier at the time.

Presenting him as the greatest threat to civil peace, and a threat to Christians as well, Nasrallah made sure to highlight Geagea’s past blunders in a bid to trigger reactions among his target audiences.

But will Hezbollah’s strategy be enough to prevent the LF from winning out over the FPM in the upcoming elections? Will this strategy resonate with the Christians?

While Christians have not been won over by the LF, they appear to grow increasingly hostile to Hezbollah and the Aounist camp, especially because the Shiite party continues to try to hinder the investigation in the 2020 Beirut explosion, which ravaged several Christian areas in the capital.

Hezbollah and the FPM are clearly taking a risk by reaffirming their alliance and also by attacking Geagea, which could prove counterproductive. This game could work to the benefit of the LF leader, who longs to lead the opposition against Hezbollah.

In Hezbollah’s rhetoric, there is no such thing as defeat. Its victories are proof of its military superiority. Its setbacks serve to fuel beliefs in martyrdom, glorifying men who die in combat — a concept deeply entrenched in the mindset of the party’s supporters.It is according to this logic that Hezbollah leader Hassan Nasrallah delivered his speech on Monday, commenting on the bloody...