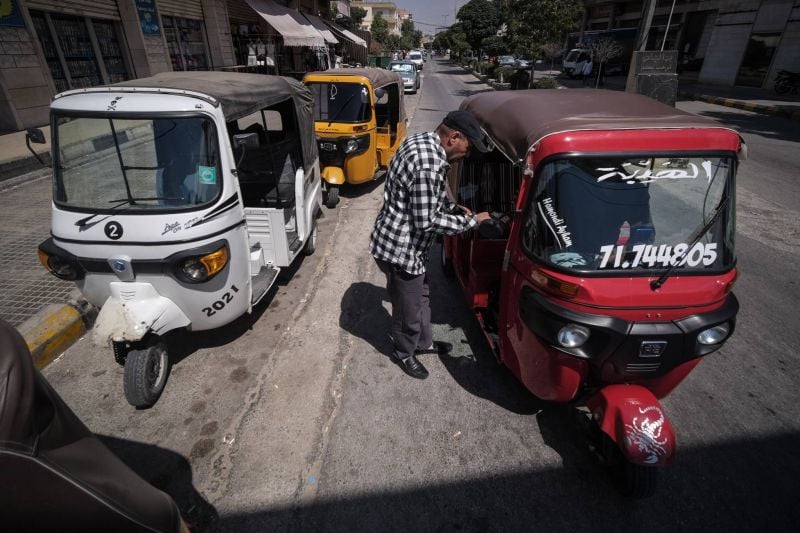 BARR ELIAS, Zahle — Throughout the central plains of the Bekaa Valley, the tuk tuks have become ubiquitous.

The small, three-wheeled vehicles, painted in loud primary colors, can be found rolling along the main roads of Barr Elias, Marj and Saadnayel. With a maximum speed of 70 km/hr, they can’t match the breakneck pace of the network of vans that have traditionally been the main mode of mass transit in the area, but they are agile enough to dart through the narrow streets of the inner neighborhoods.

There are now some 400 of the small vehicles in Barr Elias alone, said Wissam Araji, the manager of a tuk tuk store on the town’s main drag, where they sell for around $2,700 apiece.

Apart from vending the vehicles, Araji owns a fleet of 20, which he rents out to drivers who give him a share of their proceeds each day.

The rise of the tuk tuks has coincided with the economic crisis and fuel shortages. A tuk tuk can go about 360 km on a 20-liter tank of fuel, Araji said, about twice as far as a six-cylinder car can go on the same amount.

“There began to be a large number of them in the Bekaa from the time when the dollar began to go up,” Araji said. “... The one who had a van began to sell it and buy a tuk tuk to use as a taxi.” 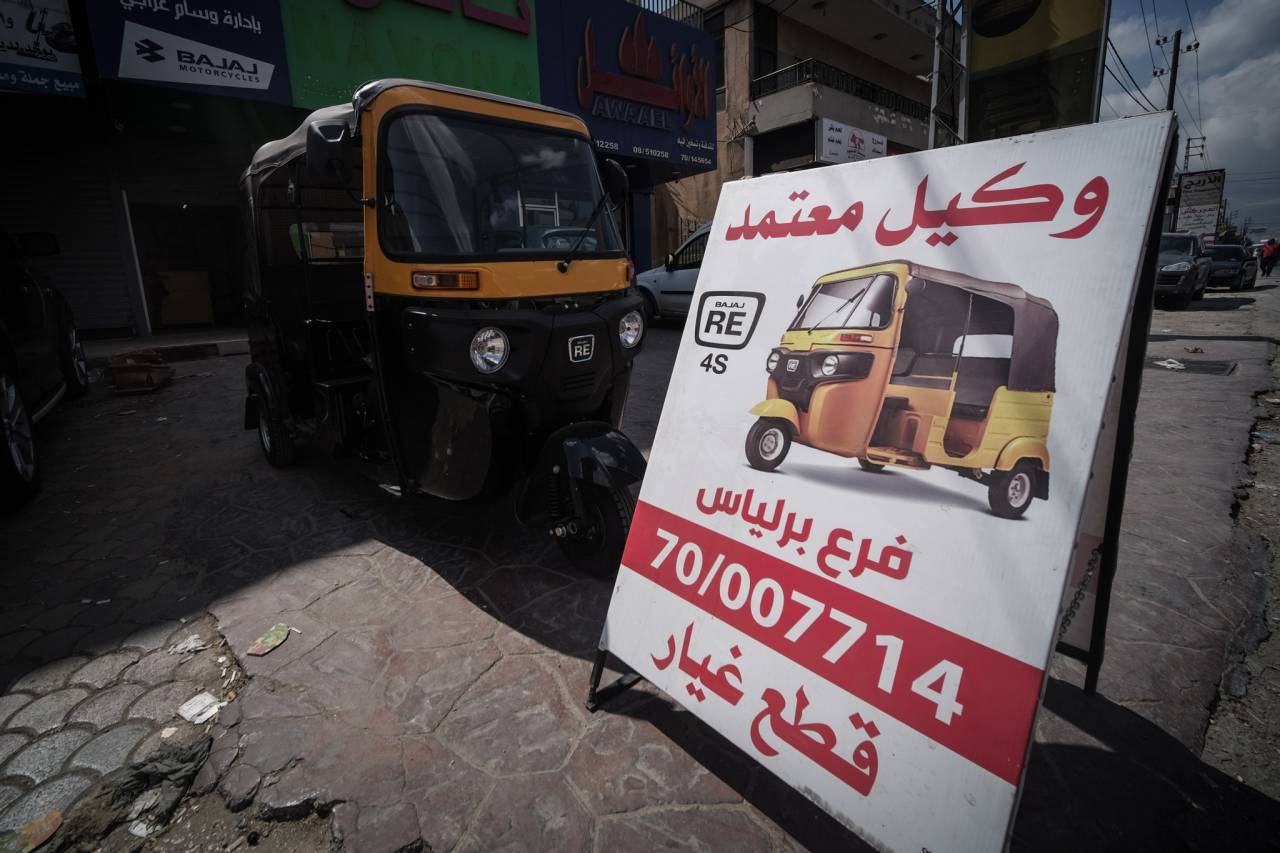 The tuk tuk, or auto rickshaw, has long been a popular mode of transportation in developing countries in Asia, Africa and Latin America. The three-wheelers are also widely used in Egypt and Iraq — where they played an integral role in the popular protests that kicked off in 2019 — but until recently were not common in Lebanon.

They are still not widely used in the congested streets of Beirut, but in the Bekaa, they found a natural customer base in the thousands of Syrian refugees who live in camps on the outskirts of the municipalities.

Apart from forming a customer base for the tuk tuks, most of the drivers are also Syrian and rent the vehicles from Lebanese owners.

Mohammed Nour, one such Syrian driver in Barr Elias, has been driving a tuk tuk for the past four months. On a typical day, he works from 8 a.m. to 8 or 9 p.m., ferrying customers within the city and between villages in the Bekaa. The cost depends on the length of the ride: LL5,000 for short trips within the village and LL10,000 or more for longer ones.

Many of Nour’s regular customers have his number and will call him for rides, he said; he also does deliveries. At the end of the day, Nour said, he keeps 30 percent of the proceeds, and the rest goes to the tuk tuk’s owner.

The arrangements between driver and owner vary. Other drivers said they pay a flat daily rate of between LL60,000 and LL80,000. Araji said he makes about LL40,000 to LL60,000 per driver after deducting the cost of fuel.

Suzanne, a school teacher living in Barr Elias, said that when the tuk tuk boom began in the Bekaa, she decided to buy one to have a regular income, since she gets her salary only three times a year. She rents the tuk tuk to a driver and pays for the cost of fuel, while the driver pays her a daily rent in return. 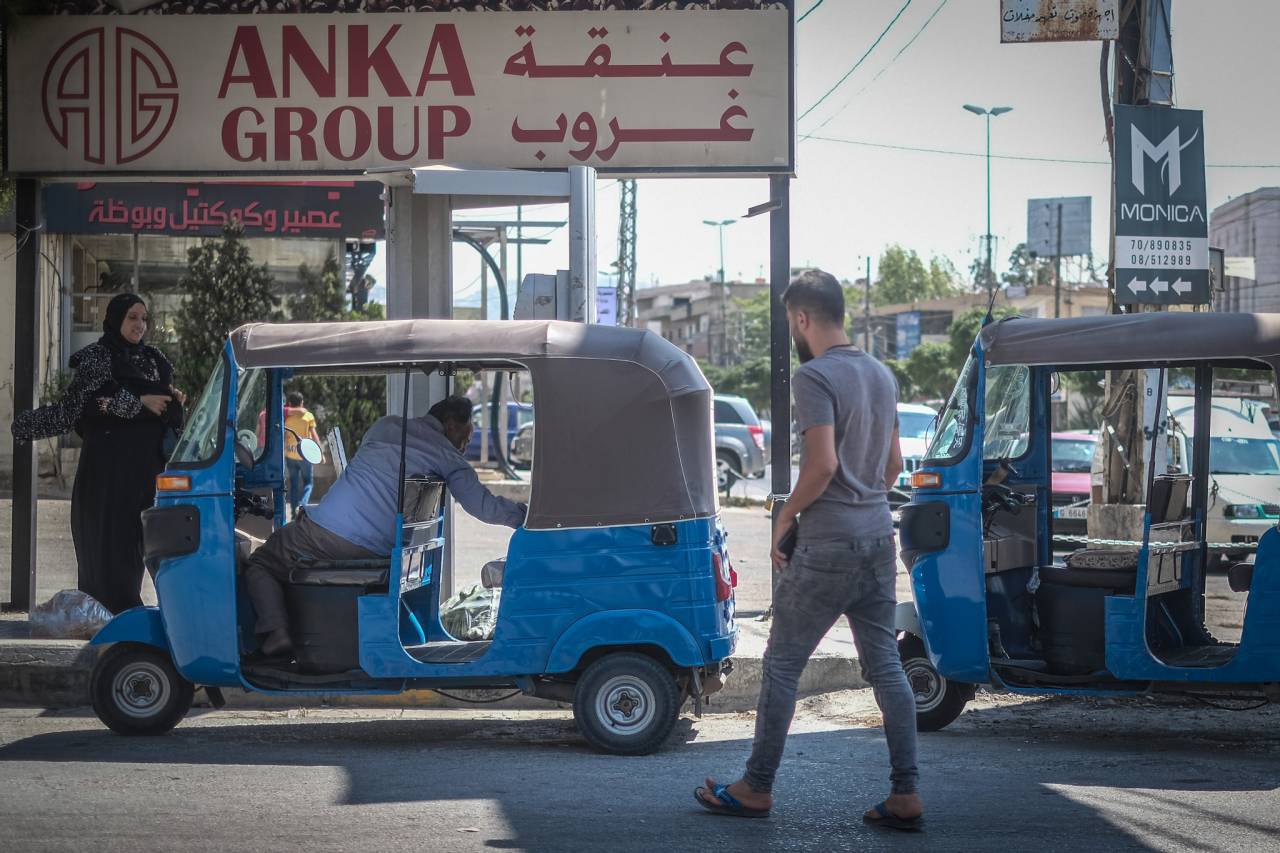 Many of the tuk tuks are driven by Syrians who rent the vehicles from their Lebanese owners. (Credit: João Sousa/L’Orient Today)

The rising popularity of the tuk tuks has become a source of friction among taxi and van drivers. Araji insisted that the tuk tuks are meant to complement, not supplant other forms of mass transportation; for instance, he said, his drivers are not allowed to go on the highways because it would be unsafe.

But Robert, a taxi driver from Rayak, said he sees the tuk tuks as unfair competition.

“It’s not legal, and the state because it’s failing and disorganized hasn’t gone after the tuk tuks,” he said, referring to the fact that the tuk tuks do not have the state-issued red license plates authorizing them to operate as public transport vehicles. (While the red plate is legally required, in areas outside of Beirut, many taxi drivers were operating without them or with forged plates even before the arrival of the tuk tuks in the market.)

“The tuk tuk is not safe and it’s not even cheaper than the car — it’s the same price,” he said. “People think the tuk tuk is cheaper, but it’s not.”

However, he acknowledged that some taxi drivers have followed the market and bought tuk tuks to drive, while renting out their cars with the official red plate to other drivers.

As for the tuk tuk drivers, they gave varying assessments of the work.

“Thank God, I’m being able to cover my expenses and to live — it’s ok,” a Syrian driver who gave his name only as Ziad told L’Orient Today as he paused between trips on the corner in Barr Elias that serves as an informal stop for the tuk tuks. He said he had recently switched from driving a van to a tuk tuk, driven by the skyrocketing cost of gasoline.

But others are disenchanted. Morhaf, a Syrian who has been driving a tuk tuk in Barr Elias for the past seven months, said the cost of fuel has made the enterprise unsustainable. Even when the local gas stations are open, he said, many refuse to sell to tuk tuks, forcing the drivers to go to the black market, where he said he was paying LL150,000 or more for a 9-liter jug of gasoline last week, when the official price of fuel was set by the Energy Ministry at LL126,400 for 20 liters.

“It’s as if the tuk tuk driver doesn’t work for himself at all. He works only for the tuk tuk owner and the gas sellers,” he said. “I want to stop, because it’s not worth it anymore.”

BARR ELIAS, Zahle — Throughout the central plains of the Bekaa Valley, the tuk tuks have become ubiquitous.The small, three-wheeled vehicles, painted in loud primary colors, can be found rolling along the main roads of Barr Elias, Marj and Saadnayel. With a maximum speed of 70 km/hr, they can’t match the breakneck pace of the network of vans that have traditionally been the main mode of mass...