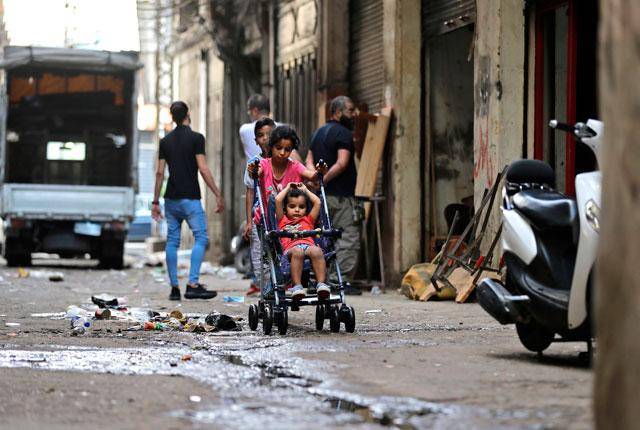 A girl pushes a stroller through the Bab al-Tabbaneh neighborhood in Tripoli. (Credit: AFP)

BEIRUT — As subsidies on fuel and other essential imports continue to crumble, implementation of a World Bank-funded program to give cash assistance to Lebanon’s poorest families remains on hold, with World Bank and government officials in a standoff over how the money will be disbursed.

While World Bank officials are insisting that no aid will be distributed if the government does not agree to pay it out in dollars, the government is now pushing to pay out in lira at the parallel market exchange rate.

In an Aug. 3 letter addressed to caretaker Finance Minister Ghazi Wazni and sent to a number of top government officials, a copy of which was obtained by L’Orient Today, Saroj Kumar Jha, the World Bank’s regional director for the Levant area, wrote, “Unfortunately, if we cannot come to a final agreement on this matter, it will not be possible to start the implementation of the Project.”

The Emergency Social Safety Net program, approved in January by the World Bank board and in March by Parliament, was intended to help the country build up its anemic social safety net system and, in part, to offset the impending elimination of across-the-board subsidies that had kept prices of fuel, medicine and some food staples from skyrocketing as the lira plunged. But implementation of the program has repeatedly stalled.

After missing an original deadline in May to meet conditions for the $246 million loan to take effect, the Lebanese government met the initial requirements — which included developing a labor management plan and getting a legal opinion confirming that the agreement complies with Lebanese law — last month.

The program was previously delayed in part because of a series of modifications made by Lebanese officials to the terms of the agreement, without first receiving approval from the World Bank.

While the government has now met the initial conditions for the program to take effect, a number of stumbling blocks remain. The government still has not signed an agreement with the World Food Program to administer the cash assistance program, appointed an outside monitor to make sure the program complies with required conditions or verified the eligibility of most of the 147,000 or more households who would receive the funding.

Jha told L’Orient Today that there are ongoing meetings to work out those issues but that “in the absence of a fully functioning government, such processes are taking much longer than [they] should.”

Mike Azar, a debt finance advisor who has been closely following the proposed social safety net program, noted that the program has been on the table since at least the fall of 2018, predating the current crisis.

“Two successive governments have dragged their feet on its implementation, and there really is no justification for that,” he said. “Most recently, the Parliament and caretaker government’s mismanagement of this process has hurt hundreds of thousands of people.”

Perhaps the largest outstanding issue is the question of whether the recipients would get the money in dollars or in Lebanese lira, and at what exchange rate. As originally announced in January, the funds would have been paid out in lira at an exchange rate of LL6,240, or 1.6 times the current “bank rate” of LL3,900 per dollar.

While World Bank officials said at the time that they would prefer payouts to be in dollars, the loan agreement itself specifies that “as long as an official peg between the US Dollar and the Lebanese Pound is in place, the Borrower shall cause Loan proceeds for Cash Transfers … to be converted to Lebanese Pounds at the higher of: (a) the constant real exchange rate, or (b) the highest regulated exchange rate vis-a-vis the US dollar, plus sixty percent.”

The rate would be “determined in consultation with Banque du Liban, and adjusted on a regular basis, including taking into account necessary inflationary adjustments, according to a mechanism described in the Project Operations Manual, all on terms satisfactory to the Bank.”

Wazni, who is the point person in communications between the government and the World Bank, in a July 29 letter to the World Bank pointed to this section and said that under the terms of the agreement, the government would pay out the aid in lira at the market rate, which would be “adjusted on a regular basis (weekly or daily) in consultation with Banque du Liban … on terms satisfactory to the World Bank.”

While Jha said that government officials had previously agreed verbally to paying out the aid in dollars, Wazni told L'Orient Today in a statement that the government's position is that both the loan agreement and the minutes of negotiation specify that the aid should be paid out in lira.

“The disbursement mechanism is still under discussion between the [World Bank] and the [government],” he said. “The [government] is suggesting to pay to beneficiaries in LBP with a possibility to convert the amount to USD directly without any losses in value.”

Jha, in his response to Wazni, argued that the loan agreement does not bind the parties to paying out in lira but simply provides the mechanism for conversion should they decide to do so. He noted that the choice of currency would be laid out in the project operations manual, a document that has not been publicly disclosed.

Jha went on to note in his letter that the lira has lost 90 percent of its value in relation to the dollar since the official exchange rate of about LL1,500 began to slip.

“Inflation rates are well into the triple digits, especially on food and other essentials, causing food insecurity for a considerable portion of the population,” he wrote. “In the absence of a unified and stable exchange rate, disbursement in USD becomes necessary to preserve the full value of aid for its intended purpose of assisting and protecting vulnerable populations in this acute crisis.”

Separately, in a statement to L’Orient Today, Jha reiterated that given the ongoing currency crisis, the “Bank believes that USD disbursement is the only option to protect the poor from exchange rate volatility.”

“We expect the caretaker government to weigh in to help protect the poor and vulnerable,” he said. “A written confirmation from the government is still awaited, without which program implementation can’t start.”

Azar said the blame for the current debate over the currency rests partly with the World Bank because the language of the agreement was vague on the issue “and has led to conflicting interpretations between the World Bank and the government.”

“The agreement should have been clearer that disbursements must be made in dollars,” he said. Azar also noted that the World Bank had, in fact, planned for disbursements to be made in lira “before the outcry from the public and particularly from donor countries, which caused it to reverse its position.”

Under the current economic conditions, disbursing aid in lira “would be a gross misuse of funds and will exacerbate inflation in the current environment,” Azar said.

Year-over-year inflation has been in the triple digits each month since June 2020, mainly due to the increase of lira money supply — a key driver of inflation. The amount of lira in circulation outside the central bank has increased by nearly seven times since the beginning of summer 2019, when the lira started deviating from the official LL1,507.5 peg to the US dollar. The value of lira banknotes in circulation stood at LL40.56 trillion at the start of August.

With BDL being unable to subsidize basic necessity imports, and with the World Bank program still on hold, the caretaker government is working on a ration cards proposal to replace the current subsidies scheme for essential goods.

As currently envisioned, the proposal offers direct cash transfers in “electronic” dollars to some 505,000 Lebanese families residing in the country, a copy of the proposal, seen by L’Orient Today, says. Each family would receive between $40 and $126, depending on the number of family members; it is unclear in what currency the aid would be disbursed. MPs passed a $556 million “exceptional credit” law on June 30 to finance the program for a period of one year.

However, it remains unclear how the program would be funded or when it might take effect and whether the payments could continue beyond one year.

BEIRUT — As subsidies on fuel and other essential imports continue to crumble, implementation of a World Bank-funded program to give cash assistance to Lebanon’s poorest families remains on hold, with World Bank and government officials in a standoff over how the money will be disbursed.While World Bank officials are insisting that no aid will be distributed if the government does not...