“The French have come to realize that our fears that their initiative will end up bailing out the current political class have been confirmed,” an official from the Christian party said. 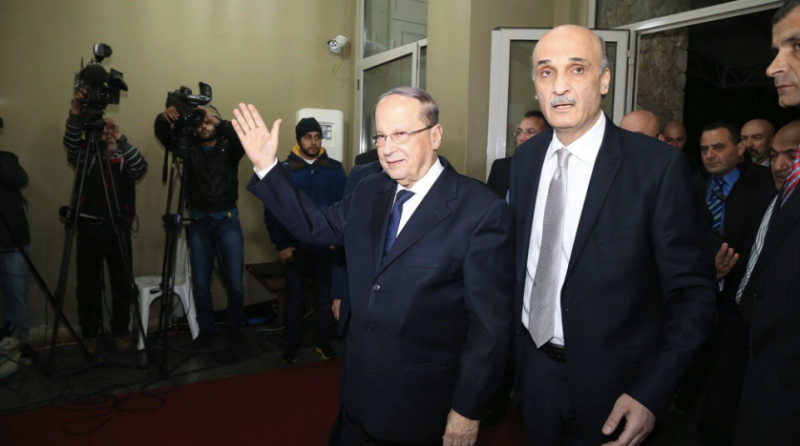 Samir Geagea and Michel Aoun are seen together in 2016 at the announcement of the Maarab agreement. (Credit: AFP)

Despite their best efforts since the Oct. 17 uprising in 2019 to present themselves as opponents to the mandate of President Michel Aoun, for whom they paved the way to the Presidential Palace back in October 2016, the Lebanese Forces today remain politically isolated in the local landscape.

This isolation was further highlighted during the visit to Beirut on May 6 of French Foreign Minister Jean-Yves Le Drian.

Not only do certain components of the protest movement continue to fiercely refuse to collaborate with the LF, which, according to them, has long been an integral part of the power structure in the country, but France also does not appear to see the Christian party as part of the “alternative political forces for change” in Lebanon.

The LF was not among representatives of groups from the Oct. 17 uprising and the traditional political parties that are hostile to the current ruling class, including the Kataeb Party and the Lebanese National Bloc, that were invited to meet with Le Drian at the French ambassador’s residence.

Since September 2019, LF leader Samir Geagea has been showing clear signs of opposition to the ruling power. On Sept. 2, 2019, almost a month before the outbreak of the Oct. 17 uprising, Geagea was already calling for a government of specialists with no political affiliations that would be able to carry out the much-needed reforms to remedy the country’s ailing economy. Two days after the outbreak of the popular protests, LF ministers walked out of the government of then Prime Minister Saad Hariri.

Congratulating themselves for having embraced the demands of the thawra long before it erupted, the LF presented itself as the sponsor of the popular revolt. Several LF supporters took part in the anti-government demonstrations, notably in predominantly Christian areas, such as Jal al-Dib and Antelias in the Metn district, and in Zouk, in Kesrouan.

This stance caused the LF to further break away from the Free Patriotic Movement led by former minister and the president’s son-in-law Gebran Bassil, after a series of differences in relation to several issues.

What’s more, the gap continued to widen between the LF and the Kataeb, the two Christian parties opposed to the president.

While both parties share the same goals and discourse, it has become clear that Sami Gemayel’s Kataeb has been seeking to distance itself from the LF.

Indeed, when Geagea extended a hand to form a common front against the entrenched political powers, Gemayel refused it.

Based on the foregoing and the fact that the LF was not present at the French ambassador’s residence, some analysts believe that Geagea’s party is growing increasingly isolated on the local political scene — not to mention the ongoing cabinet formation negotiations on which Geagea has turned his back.

This stance has caused the LF to become further distanced from the other parties which, although hostile to the FPM, continue to be engaged in the new cabinet formation talks, notably, the Future Movement, the PSP and the Amal Movement and its leader, Speaker Nabih Berri.

Berri would, at one point, have liked to form an opposition bloc in the face of Aoun and Bassil.

The LF stance has, however, given more leeway for Bassil to impose his choices as the representative of Christians.

According to pundits, Aoun and Bassil are likely to secure the major part of the Christian quota within a future cabinet, given Geagea’s lack of interest in the cabinet formation process.

The Maronite leader, however, stressed that if his party had not supported Aoun’s candidacy for the country’s highest office, the situation in Lebanon “would have been much worse” — a apparent effort to justify the Maarab agreement reached in 2016, which put Aoun in office but which no longer stands today.

Why does Paris reprimand the LF?

The LF’s stance does not appear convincing for the French who are keen on supporting a “transition” led by the “political forces of change” in Lebanon.

“Since 2016, the LF have made a deal with Michel Aoun and Gebran Bassil. Today, they seem to oppose those in power under pressure from the street. But you can’t be on the opposition side after you had struck a deal with Gebran Bassil,” a French diplomatic source told L’Orient-Le Jour.

Le Drian’s visit to Beirut had two purposes: to let the political class know of Paris’ intention to impose punitive measures on certain politicians and to confirm its support of the political forces of change that could replace the current ruling class in the 2022 parliamentary elections.

During a press briefing on Tuesday, French Foreign Ministry spokeswoman Agnes von der Muhll reaffirmed her country’s desire to take action in this regard.

She recalled the entry restrictions already taken against certain Lebanese politicos, whose identity has not been revealed, stressing that these measures could be toughened should the government blockade persist.

Pierre Issa, the secretary-general of the Lebanese National Bloc, appears to share the same vision as the French on the LF. Issa, who took part in the meeting at the French ambassador’s residence, agrees that the Christian party should not have been present there, since it is part of the power structure in the country, Instead, the LF “should be invited to meet with Hezbollah, the Future Movement, the FPM, and the PSP,” he told L’Orient-Le Jour.

According to him, it is high time that all traditional political forces give way to those that could bring about real change.

What does the LF think of all that

The LF appears to be downplaying the political significance of last Thursday’s meeting.

“Mr. Le Drian’s visit was aimed at meeting with the groups from opposite ends of the political spectrum and conveying France’s dissatisfaction with the political class. Some figures wanted to seize this opportunity to meet him and to get support from France,” an LF official told L’Orient-Le Jour.

“The French have come to realize that our fears that their initiative will end up bailing out the current political class have been confirmed,” he added.

The source went on to say, “We were the only parliamentary bloc not to have nominated Mustapha Adib (Lebanon’s ambassador to Berlin who was appointed premier-designate in the aftermath of the Beirut port explosion last August) to form the cabinet because we already knew that this approach was doomed to failure.”

He stressed that the time has come to hold early legislative elections, a subject that has become the LF’s favored talking point.

In fact, a few days ago, the LF called on the FPM to join with it in coordinating a collective resignation of the parties’ MPs from Parliament to this end.

Despite their best efforts since the Oct. 17 uprising in 2019 to present themselves as opponents to the mandate of President Michel Aoun, for whom they paved the way to the Presidential Palace back in October 2016, the Lebanese Forces today remain politically isolated in the local landscape.This isolation was further highlighted during the visit to Beirut on May 6 of French Foreign Minister...

Loyal to their ‘zaim’ until their last breath