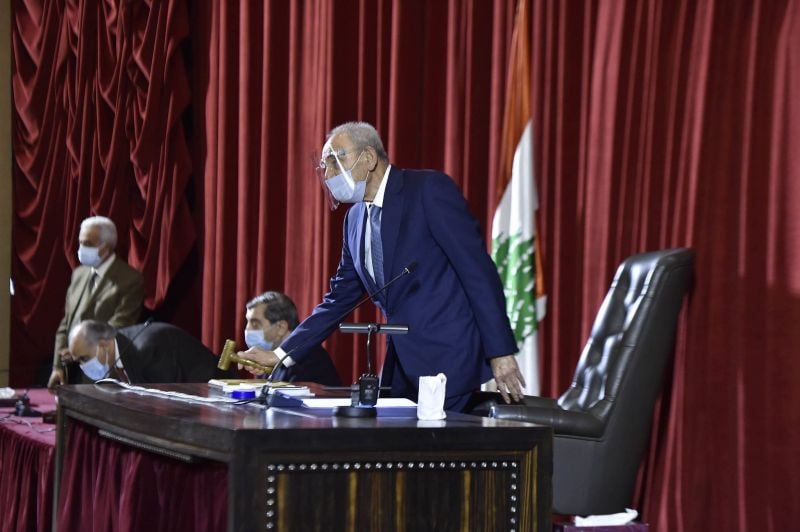 BEIRUT — As Lebanon sinks deeper into its worst economic and public health crises in decades, Parliament met on Monday to discuss and pass a bill that took aim at public sector corruption and another to remedy funding shortfalls for the public electricity utility, Électricité du Liban.

Recovering looted funds: A bark without a bite

The “Law Returning Funds Obtained via Crimes of Corruption” is one of several pieces of legislation established in the past few years to combat corruption. These include an illicit enrichment law passed in October 2020 that requires public sector employees and anyone working with the state to make regular financial declarations, and an April 2020 law that called for the creation of a new body to implement anti-corruption legislation.

The legislation passed on Monday paves the way for the establishment of a special committee to decide how to recover money and assets obtained through corrupt practices such as bribery and embezzlement. The law also creates a special fund where recovered money will be deposited, which will be used to combat poverty, contribute to sustainable development and fight corruption.

These laws are part of a framework of anti-corruption legislation laid out by the United Nations Convention Against Corruption, which Lebanon joined in 2009, says Karim Daher, a lawyer who specializes in public finance and who advised Parliament on the new law.

Lebanon ranked 149th out of 180 in Transparency International’s 2021 world corruption perception ranking, reflecting a lack of trust in the ruling elite and a politicized judiciary. This is a 12-point drop since 2020, showcasing a further erosion in trust in the state following its COVID-19 pandemic response and the Aug. 4 Beirut port explosion.

“Many of these draft bills were submitted years ago, but [Parliament] didn’t speed up adoption until the Oct. 17 uprising,” Daher told L’Orient Today, referring to the nationwide mass protests that broke out a year and a half ago and decried endemic corruption among Lebanon’s political class.

However, the special committee is toothless as established by the newly minted law, as it would fall under the National Anti-Corruption Commission, the body created by the April 2020 anti-corruption law, and would be made up of its president and two other members. But the commission’s members have not yet been appointed, despite a three-month deadline for the government to name them.

As the current government is resigned, this task will fall to the next cabinet.

“We are linking this law to something in the past that didn’t even take place — we have to be honest here,” MP Jamil al-Sayyed (Ind./Baalbeck-Hermel) said during the session.

Additionally, the new committee would require corruption cases to be investigated and adjudicated by judicial authorities — either in Lebanon or abroad — before it can begin to consider how to restore the money or assets.

“This law isn’t about proving corruption exists, but it’s a mechanism to follow up on cases once they’re proved and coordinate with the relevant authorities in Lebanon and overseas,” MP Yassine Jaber (Amal bloc/Nabatieh) told L’Orient Today following a parliamentary committee session dedicated to the law last week.

While the new committee should be independent of the ruling class, with members required to be selected based on merit and have no political connections, it will rely on coordination with local judicial and security authorities, which remain closely linked to those in power.

“None of these laws work without an independent judiciary,” MP Anwar El-Khalil (Amal bloc/Marjayoun-Hasbaya) shouted out during the session, before Parliament Speaker Nabih Berri (Amal/Zahrani) ordered him to quiet down.

“There is now a lot of work that has been done toward fighting corruption in Lebanon” in terms of legislation, Daher said. “Now we need enforcement, and we should continue putting pressure on the politicians until this happens.”

Caretaker Energy Minister Raymond Ghajar, who earlier this month warned that Lebanon was heading toward a total blackout, had originally called for a LL1.5 trillion transfer, but MPs voted to reduce this during a joint committee meeting on March 16.

As EDL is one of the few bodies that is still able to benefit from the central bank’s official exchange rate of LL1,507.5 to the dollar, the transfer amounts to some $200 million.

These funds will come from the central bank’s dwindling foreign currency reserves — money that mostly belongs to depositors at Lebanese banks. The use of these reserves, estimated by caretaker Finance Minister Ghazi Wazni to be about $16 billion, led MPs from the Lebanese Forces and Progressive Socialist Party to vote to reject the transfer.

“We are against this treasury advance and against spending people’s money,” MP Hadi Aboul Hosn (PSP/Baabda) said.

“We’re not doing this from a political standpoint, but to call for reforms to the sector,” he continued. “If we approve this transfer, the same question will be put to [Parliament] again in a few months.”

Since the 1990s, EDL has been running a huge deficit due to technical faults, high production costs and a failure to collect enough revenue from consumers. Covered by transfers from the treasury, it had contributed some $43 billion to Lebanon’s public debt by 2018 — almost half of the total.

However, the opposing MPs offered no immediate alternative to sustaining Lebanon’s power supply in the short term. Although the country has experienced regular cuts in public electricity since the end of the Civil War, these cuts have worsened in recent months amid reports of a severe fuel deficit.

For MP Ibrahim Kanaan (FPM/Metn), the only way to avoid the same demand for a treasury advance further down the line is the formation of a government that can undertake reforms to the sector and develop a sustainable plan for electricity generation.

Lebanon has been without a cabinet for more than seven months after Hassan Diab’s government resigned in the wake of the Aug. 4 explosions; more than five months have passed since Saad Hariri was designated to form a new cabinet.

“If a government isn’t formed, the whole country is in danger,” Berri said. “It’s like the Titanic.”

Tension between Hariri and President Michel Aoun does not seem to have dissipated in the week since they engaged in a public spat over the new cabinet’s makeup. In an interview published in the newspaper Al Joumhouria earlier Monday, Aoun accused Hariri of “undermining all rules of government formation,” to which the premier-designate replied: “Message received, no need for a response.”

During the session, multiple MPs called on the caretaker government to step up and take effective action in the face of a rapidly deteriorating economic, financial, social and political situation.

“The caretaker cabinet must work, not stop working,” Kanaan told MPs and eight members of the caretaker government who attended the session. “They can’t call on us to ‘explain the constitution.’”

Diab had called on Parliament last week to issue a “constitutional interpretation” that would clarify the outgoing government’s powers.

In response to Diab’s statement, Berri said, “It is not on Parliament’s agenda to change the constitution. ... Let them go to work.”

Although not on its original agenda, MPs also approved an agreement with the Iraqi government to import fuel in exchange for medical services and equipment.

In February, the Iraqi cabinet approved a deal to provide Lebanon with 500,000 tons of oil per year, in exchange for medical services — something that the Lebanese health system is struggling to provide for its own people.

Lebanon has been struggling to obtain enough fuel to power its electricity plants after a contract with Algerian provider Sonatrach expired at the end of 2020. The government failed to find an alternative and has since been relying on expensive purchases of fuel on the spot market.

While the caretaker energy minister has repeatedly touted Iraqi oil as a solution to the country’s fuel problems, experts have said it will require costly refining before use in Lebanon’s power plants due to its high sulfur content.

BEIRUT — As Lebanon sinks deeper into its worst economic and public health crises in decades, Parliament met on Monday to discuss and pass a bill that took aim at public sector corruption and another to remedy funding shortfalls for the public electricity utility, Électricité du Liban.Recovering looted funds: A bark without a biteThe “Law Returning Funds Obtained via Crimes of...

Our full breakdown of newly elected MPs by party affiliation

In Zahle, a traditional battle and an advantage for the Lebanese Forces