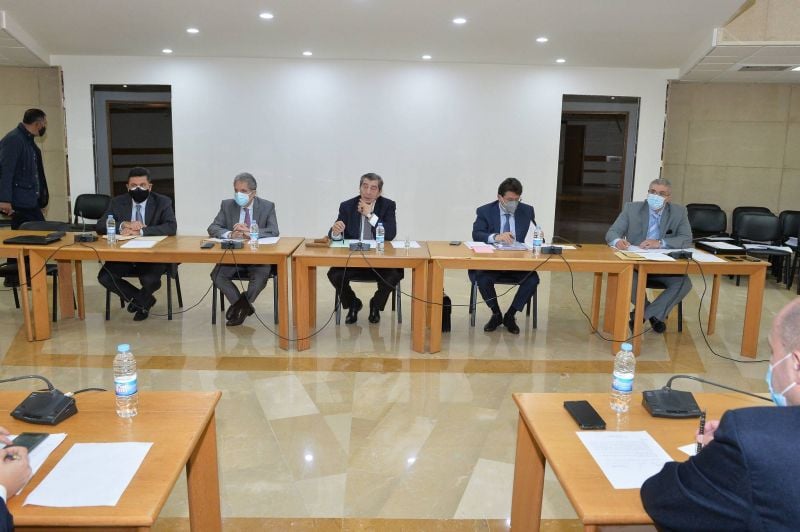 BEIRUT — MPs voted Tuesday in favor of a $200 million transfer to keep Lebanon’s power plants running for the next couple of months, while taking another chunk out of the central bank’s rapidly dwindling foreign reserves.

The vote came during a joint session of the Finance and Budget Committee, Public Works, Transport, Energy and Water Committee and Administration and Justice Committee. The law will now move forward to be voted upon by the full Parliament.

Électricité du Liban is one of the few bodies that is still able to access the official pegged rate of about LL1,500 to the dollar, so while the law sets out a treasury advance of LL300 billion, Banque du Liban will be required to fork out $200 million. This amount should be sufficient to cover fuel for around a further one and a half months, according to Jessica Obeid, an independent energy consultant.

In the proposal, EDL would only be permitted to spend the $200 million to finance fuel purchases, and not other expenses.

This comes as Karadeniz, the Turkish company that owns the floating power barges docked at Jiyyeh and Zouk, has threatened to leave Lebanon due to the government’s failure to pay it. Another company, Primesouth, which operates and maintains the Deir Ammar and Zahrani power plants, also said it would no longer be able to operate if outstanding payments were not made.

The $200 million is significantly lower than the figure set out in the urgent draft law proposed by MPs from the Free Patriotic Movement, which had called for a LL1.5 trillion ($1 billion) transfer, which would cover fuel costs for around a year.

“We had to find a possible solution, taking into consideration the lack of dollars,” MP Alain Aoun (FPM/Baabda) told L’Orient Today. “The risk of not having electricity is too high.”

Caretaker Energy Minister Raymond Ghajar said last week that if MPs did not approve the transfer of funds to purchase fuel to generate electricity, the country would be plunged into darkness by the end of March.

“Getting to a point where there is no power has huge economic and political implications that no one can afford,” Obeid said. “We cannot recover economically without power.”

“We told them, if we accept to pay LL1.5 trillion in one go, you are just telling them ‘see you next year’” with no pressure to reform, said MP Yassine Jaber (Amal bloc/Nabatieh). He added that his bloc saw the LL300 billion installment as “the most reasonable option.”

Following the session, MP Hadi Hobeiche (Future/Akkar) said from Parliament that while his bloc had voted in favor of the law, they were “not convinced” by it, but were faced with “two options, each worse than the other … a treasury advance or darkness.”

However, for Obeid, providing EDL with $200 million in the absence of radical reforms to the power sector is simply “buying time while consuming what’s left of depositors’ money.”

“At some point, this will run out,” she added. “We need a sustainable solution.”

Aoun admitted that the treasury advance was only a “partial solution” and that there is a lot that remains to be done.

MPs from the Lebanese Forces and the Progressive Socialist Party voted against the proposal, objecting to the use of the central bank’s evaporating reserves — money that mostly belongs to Lebanese depositors — to fund fuel imports for electricity.

After failing to find an alternative supplier to the Algerian company whose contract with the state expired in 2020, the government has been relying on expensive “spot purchases” to secure fuel.

“We had to say no” to the law, said MP Faisal Sayegh (PSP/West Beirut). “The money being requested is what’s left of the banks’ reserves. We don’t want business as usual.”

Since the 1990s, EDL has been running a huge deficit due to technical faults, high production costs and a failure to collect enough revenue from consumers. Covered by transfers from the treasury, it had contributed around $43 billion to Lebanon’s public debt by 2018 — almost half of the total.

A law was passed in 2002 to create a regulatory authority to oversee electricity production and distribution in Lebanon, but this body has never been formed, and while many reforms have been promised, including a 2019 electricity plan that proposed six new power plants and 24/7 energy by 2020, none have seen the light of day.

“Are the same politicians and party that have failed to do these reforms or do anything useful going to do that now?” Jaber asked, referring to the FPM.

Ministers associated or allied with the FPM have headed the Energy Ministry in every government since 2009, making it the party most visibly associated with electricity and attempts to reform the sector.

“The first step toward overhauling the energy sector is a government willing to implement reforms,” she added. “So far, we haven’t had this and the resigned government has shown no willingness to take any action.”

Sayegh said his bloc had proposed postponing Tuesday’s session by 10 days, giving an ultimatum for a government to be formed.

“For us to agree to giving the money, we need to see the light at the end of the tunnel,” he said. “All we’re doing is partial solutions, but we will be faced with bigger problems down the road.”

Lebanon is now into its eighth month without a government following the resignation of now-caretaker premier Hassan Diab’s cabinet on Aug. 10, following the Beirut port explosion.

President Michel Aoun and Prime Minister-designate Saad Hariri continue to be at loggerheads over the makeup of a new cabinet and engage in arguments via press releases over who is to blame for the government formation holdup.

Various mediation attempts have so far failed to bear fruit. It has been over a month since Aoun and Hariri last met.

BEIRUT — MPs voted Tuesday in favor of a $200 million transfer to keep Lebanon’s power plants running for the next couple of months, while taking another chunk out of the central bank’s rapidly dwindling foreign reserves. The vote came during a joint session of the Finance and Budget Committee, Public Works, Transport, Energy and Water Committee and Administration and Justice Committee....

Rai criticizes those who want to 'impose' a president, Kaouk insists that consensus is the solution