Has Gen. Joseph Aoun’s ‘democratic mini-putsch’ unleashed a showdown with the presidency?

Army chief Gen. Joseph Aoun’s name is circulating as a potential successor to the president. 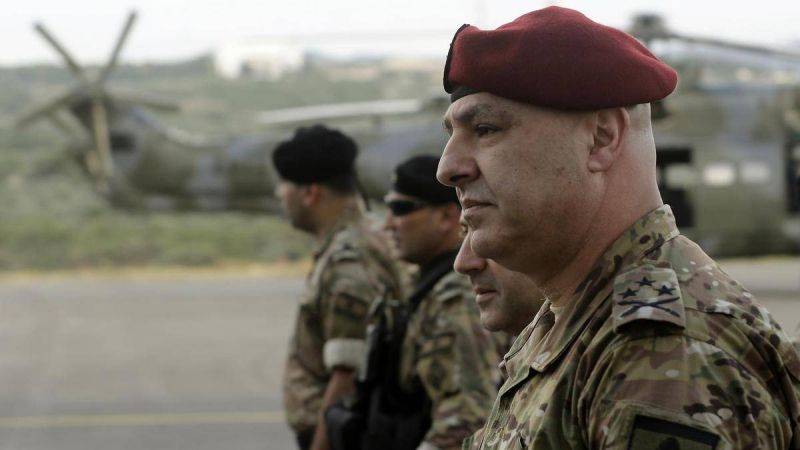 “The soldiers suffer and die of hunger like the people, what do you plan to do?” Gen. Joseph Aoun asked the ruling class last week. (Credit: AFP)

For half an hour on March 8 and in a skillful strategy game, army chief Gen. Joseph Aoun swapped his military cap for that of an average Lebanese citizen who has been shouting in despair since Oct. 17, 2019, as the country sinks further into crisis.

Joseph Aoun fulminated against the economic crisis that worsens daily, the consequences of which have impacted his soldiers. He lambasted the ruling class for its lack of vision and its inability to propose any solution to the crisis.

The army chief managed to assert himself as a key player on a political scene without crossing the red lines that his post imposes on him — he was clear that he will not use the army to settle political accounts.

In a country other than Lebanon, Joseph Aoun’s speech would have been perceived as a military putsch, especially amid the surreal scene that played out on the day of its delivery, bringing to mind the putschist movements in many countries, including Syria in the 1950s and 1960s.

All the ingredients for a coup d’état were there. Demonstrations broke out in the streets; protesters chanted anti-government slogans; the presidency called for a security, political and economic meeting in the presence of the caretaker prime minister and the concerned ministers. The army chief, in turn, called for a meeting with top officers, where he lashed out at the political establishment and appeared to take the people’s side.

Joseph Aoun was keen to disclose his meeting with ranking officers to the media, two hours after the announcement of the Baabda meeting’s decisions in which he participated — a small detail that made all the difference.

Had he broadcast his speech to his officers prior to the Baabda meeting, it would have been received as far more antagonistic.

The army chief probably chose his timing in order to prevent his approach from being equated with a coup, as local and international conditions are not conducive to such upheaval in Lebanon.

What mattered to him was that his message was conveyed. His speech, both in substance and in form, inaugurates a new era and will inevitably have repercussions on the political level, especially since it has targeted all those who have tried to exploit the army to serve their tactical interests.

In his speech, the army chief also responded to President Michel Aoun, who has been pushing the army to reopen roads closed by the demonstrators without taking into account the consequences of a confrontation between the population and the military.

At the Baabda meeting, the head of state had insisted on the need for the army to open the roads, reprimanding the army chief for showing leniency toward protesters blocking traffic all over the country.

However, the army chief’s opinion is, according to his close associates, that only a political and economic solution to the deepening crisis will prompt protesters to clear the roads definitively.

Joseph Aoun maintained the same discourse at the Baabda meeting, stressing that he could not deploy his forces in the face of hungry people protesting against the deterioration of their living conditions while his soldiers find themselves in exactly the same boat, if not worse.

During his meeting in his Yarze office, Joseph Aoun spoke about the campaigns waged against the army. He was mainly alluding to Hezbollah and the leader of the Free Patriotic Movement, Gebran Bassil, who accuse him of having political ambitions, notably in relation to the presidency

The army chief also lashed out at the political forces that are trying to interfere in military appointments and promotions — an apparent jab at Bassil and Prime Minister-designate Saad Hariri.

In fact, Joseph Aoun and Hariri were previously at odds over the appointment of a director of military intelligence in North Lebanon.

When he spoke about interfering with military promotions, he meant that the army must remain at a remove from the disputes between the president and the parliament speaker.

In short, the army chief appeared angry with the entire ruling class. His remarks — “Where are the politicians leading the country? What do they plan to do?” — could not be any clearer.

According to sources close to him, the army chief’s criticism of the political class is not new. What’s new is the fact that he chose to make it public this time.

When he met with politicians away from the media, he bluntly asked them to speed up the formation of a government.

“The army can’t take it anymore. What you are doing is going to lead to an unprecedented collapse,” he warned repeatedly.

Joseph Aoun’s critics, who take a dim view of his compassion toward the demonstrators and his political stance, are convinced the army chief is trying to pave the way for a solution that would involve the military.

They base their criticism on two arguments, which they believe explain his tactics.

First, there is a possibility that a military government might be formed if the protest movement continues and Michel Aoun’s mandate expires in the absence of a government capable of organizing legislative elections.

Second, the army chief is said to want to pave the way for his election as head of state. Lebanon appears to be in a situation similar to the time during which Gen. Michel Sleiman led the military forces during the turbulent period following the 2005 assassination of former Prime Minister Rafik Hariri. Sleiman was then elected president in 2008.

While the army chief’s public speech disturbed some local parties, it was well-received at the diplomatic level, which is unsurprising since it reflects the rhetoric that several Western and Arab ambassadors have repeatedly expressed to Lebanese officials.

These ambassadors do not hide their concern over the crisis gripping Lebanon or their disappointment at the lax and indifferent behavior of the ruling class.

The fact that a high-level official has, in turn, attempted to shake up the ruling class is perceived as further pressure to break the stalemate.

These sources argue that the army chief’s public speech and timing have a significant political and social dimension: he chose to get closer to the population, conveying a message that the military stands by the people and not by those in power.

The same sources praised the army chief as someone who “has character and does not show a two-faced attitude.” They described their experience with him as “very good,” arguing that it is only normal for him to have political ambition since he places the national interest at the top of his list of priorities.

The path to Baabda thus seems to be slowly opening before the army chief, but surely he must approach it through democratic channels.

In a country like Lebanon, the army would likely find it challenging to lead a coup d’état for several reasons: the country’s sectarian and confessional composition, its political divisions and the traditional regional and international factors at play.

This does not mean that the idea has not already crossed the minds of some capitals, but local and regional circumstances do not lend themselves to such sudden change.

A military coup d’état is impossible without go-ahead from Hezbollah or an overlap of Iranian and American interests, which is not presently the case.

What’s more, the relations between the army chief and Hezbollah are deplorable.

Indeed, a few weeks after the popular Oct. 17, 2019 uprising certain Arab and Western states raised the idea of establishing a military government. However, they quickly realized that this was not viable as conditions were not conducive to forming such a government, according to Western sources.

Although the idea was then brushed aside, it has remained anchored in the minds of certain political parties, notably the head of the FPM, who views the army chief as his main rival to succeed Michel Aoun.

It appears that the campaign waged against the army chief after his visits to the United States and Saudi Arabia is thus bound to intensify.

For half an hour on March 8 and in a skillful strategy game, army chief Gen. Joseph Aoun swapped his military cap for that of an average Lebanese citizen who has been shouting in despair since Oct. 17, 2019, as the country sinks further into crisis.Joseph Aoun fulminated against the economic crisis that worsens daily, the consequences of which have impacted his soldiers. He lambasted the ruling...