As prices for sanitary products soar, some women and girls are turning to riskier options to manage their periods 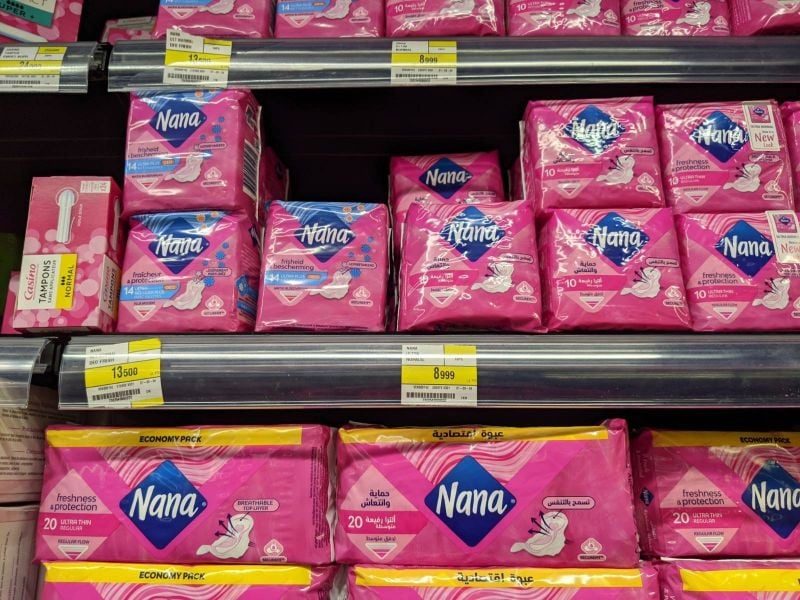 The price of some sanitary products has more than doubled since early summer 2020. (Credit: Emily Lewis/L’Orient Today)

BEIRUT — In the midst of Lebanon’s economic collapse and faced with soaring inflation, women and girls are being forced to change the way they manage their periods, a new UN study has found.

“Many families are having to adopt new coping strategies,” said Chaza Akik, a public health research professor at the American University of Beirut, who presented the study commissioned by the United Nations Population Fund (UNFPA) at a virtual conference Friday.

Seventy-seven women and girls from vulnerable Lebanese and Syrian communities across the country were interviewed about how they manage their periods, their perceptions of menstrual hygiene and attitudes toward sustainable sanitary products.

In the past year, the research found, many women and girls have switched to using cheaper, lower quality pads or baby diapers, towels or cloths — alternatives that are less hygienic and can pose serious health risks.

Addressing period poverty and conducting this research is not only essential to protect women and girls’ health, said UNFPA Lebanon chief Asma Kurdahi, “but also a matter of human rights.”

The research is the latest piece of evidence documenting a rise in period poverty in Lebanon over the last year, with women and girls struggling to afford the pads, panty liners and tampons they need to safely manage their monthly cycles.

A report by Plan International published in April 2020 found that among more than 1,100 people living in vulnerable communities, 66 percent of adolescent Syrian refugee and Lebanese girls said they did not have the financial means to buy sanitary pads.

This figure is likely to have risen as more and more people have been pushed into abject poverty or lost their jobs and as prices of goods have soared.

In the summer of 2020, packets of 10 Nana sanitary pads — one of the most popular brands — were being sold for between LL4,000 and LL6,000 on average, according to its distributor, and at one point for as little as LL2,000, according to L’Orient Today’s own price checks. Now, the same packet is being sold for about LL9,000.

“These products became so expensive,” Fadia Matar, a 50-year-old resident of the poor east Beirut suburb of Nabaa told L’Orient Today. “With only my daughter working, it has become a struggle to buy them.”

Amid widespread medicine shortages, Matar said, finding basic painkillers such as ibuprofen to deal with period pain has also become a challenge.

When the Economy Ministry released a list of around 300 imported food and household items that would be subsidized at a rate of LL3,900 to the dollar last year, many expressed outrage that men’s razors appeared on the list but sanitary products did not.

At the time, Economy Minister Raoul Nehme justified the decision by saying that the raw materials used to produce sanitary pads locally were subsidized, and would therefore bring down the price.

Nevertheless, the cost of Sanita’s locally produced Private pads has more than doubled.

“Everyone is talking about food and other expenses,” Matar said. “But we need to be talking about sanitary products. They’re essential too.”

Multiple women told L’Orient Today that they had switched the brand of sanitary products they use in order to save money.

To help women and girls in need get access to sanitary products, Line Masri and Rana Haddad set up the Dawrati (My Period) initiative last year, gathering donations of sanitary pads, panty liners and intimate wipes to be distributed via a network of partner NGOs. However, as the crisis has deepened, they are finding it harder to secure donations.

“Donating has become a luxury,” Masri said. “There are people now reaching out who are working, but with inflation, their salary no longer stretches to the end of the month.”

“We have fewer donations, but more women to help,” she added.

Period poverty is not simply about the cost of and access to sanitary products — it also relates to women and girls’ ability to manage their periods safely.

In the informal tented settlements in which many Syrian refugees live, poor sanitation and lack of reliable access to running water makes handling periods and menstrual products a challenge, Akik said.

Women and girls in these environments may also not have access to a private space where they can change their pads or wash soiled clothes.

It is still common, for example, for shopkeepers to hand over sanitary products in a separate, black plastic bag, in order to conceal their contents.

“Unfortunately, many people are still embarrassed to speak about their periods and we don’t hear it talked about on TV,” Matar said. “But there are much more shameful things we talk about openly.”

The stigma and reluctance to discuss menstruation openly means that many women and girls do not receive accurate and complete information on the safest and most hygienic ways to deal with their periods. A common misconception, Akik said, is that women cannot shower during their periods as it will stop their cycle.

One of the goals of the UNFPA-commissioned study was to establish whether sustainable, reusable menstrual hygiene products could be a potential way to tackle period poverty.

Switching completely to reusable pads, which are washed after each use and can last up to five years, would reduce costs by up to 76 percent per year, the study found, while a mixture of disposable and reusable pads would save a person up to 35 percent.

Akik and her research partner Zeina Jamaluddine found that many women and girls were interested in the idea of sustainable solutions in principle, but that it would be difficult to introduce them in practice.

The first issue is cost. While women and girls welcomed the cheaper long-term cost, Jamaluddine said, the prospect of spending LL60,000 for reusable pads in one go was too expensive, “especially if there is more than one woman or girl in the household.”

In addition, many raised concerns about their ability to access facilities to wash reusable pads properly and finding places to leave the pads to dry discreetly.

Tackling the other key aspect in period poverty, stigma and misinformation, will be another challenge. As a first step, UNFPA developed an information booklet with the Women’s Integrated Sexual Health program at the American University of Beirut Medical Center to raise awareness around periods and menstrual hygiene.

When they started out, Dawrati’s founders wanted to combine their work collecting donations with educational sessions to raise awareness around periods and menstrual hygiene.

However, amid challenges posed by the destruction of the Aug. 4 port explosion and successive COVID-19 lockdowns, they have not yet been able to achieve this goal, channeling their efforts solely into getting products to those in need.

When it comes to period poverty in Lebanon, Masri said, “there is still a lot to do.”

Editor’s note: This article has been updated to include the shelf price of Nana sanitary pads in the summer of 2020 according to the product’s distributor, Food & Drug Corporation SAL.

BEIRUT — In the midst of Lebanon’s economic collapse and faced with soaring inflation, women and girls are being forced to change the way they manage their periods, a new UN study has found.“Many families are having to adopt new coping strategies,” said Chaza Akik, a public health research professor at the American University of Beirut, who presented the study commissioned by the United...