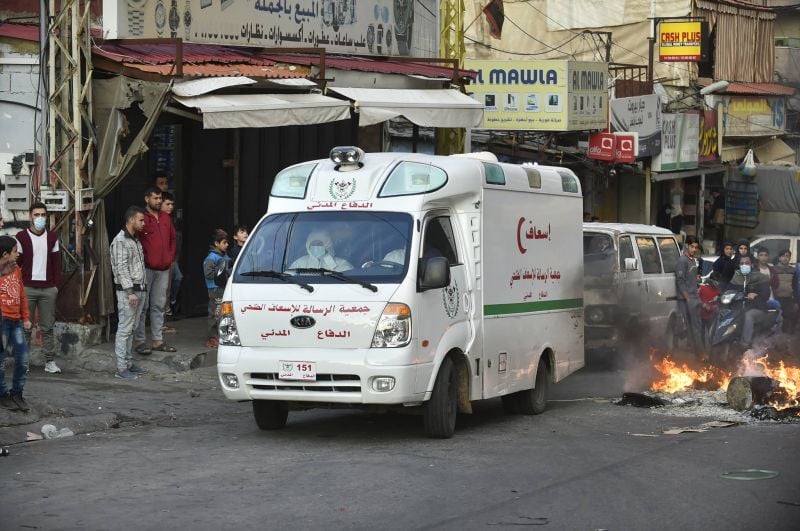 An ambulance navigates around a roadblock set up by protesters last week. (Credit: Hussam Shbaro)

BEIRUT — With many of Lebanon’s businesses reopening their doors and some activities returning to normal, cases of COVID-19 have begun to creep up, bringing warnings that hospitals might soon be overwhelmed once again.

Jade Khalife, a physician specialized in health systems and epidemiology and a member of the Independent Lebanese Committee for the Elimination of COVID-19 (ZeroCovidLB), told L’Orient Today that amid the relaxation of measures, “we can expect cases to sharply increase for the next few weeks, hospitals being overwhelmed in a week, deaths rising sharply by April.”

The high number of cases we are seeing, he added, suggests that the B117 strain — the highly contagious British variant — of the virus is likely dominant.

Firass Abiad, the head of Rafik Hariri University Hospital, is also concerned about what the coming weeks might bring. “I think things are going to get worse,” he said.

Hospitals are still coping with the massive influx of COVID-19 patients admitted in late January and February following the relaxation of prevention measures over the holiday period.

At RHUH, Abiad said any easing of strain following the strict lockdown that began in January was “short lived” and patients are beginning to arrive in greater numbers.

The number of people being treated in hospitals’ intensive care units has already risen from the beginning of the month, when Lebanon saw a four-day stretch with fewer than 900 ICU patients — the only days with sub-900 numbers since January. On Wednesday, 936 patients were in ICU.

The number is likely to rise in the coming weeks in line with the upward trend in COVID-19 cases. It takes up to three weeks for someone who has been infected with the virus to fall critically ill and require hospital treatment.

“To be honest with you, the number of patients we have in our COVID-19 units never really went down,” said Hassan Wazni, the director of Nabih Berri Governmental University Hospital in Nabatieh. “In fact, pressure on our staff has now started rising again in the last few days.”

On Friday, the hospital opened a new 27-bed COVID-19 unit, which quickly filled up, taking in patients who had previously been waiting for beds and receiving treatment in the emergency room. The new wing is staffed by nurses who have been directed away from other departments, such as elective surgery.

“This has helped us a bit, as we aren’t having to turn patients away,” Wazni continued. “But the patients we do have are generally in very critical condition and need a lot of care.”

However, Abiad warned, hospitals’ ability to expand capacity for COVID-19 patients is extremely limited. “It’s mainly a staff issue rather than a bed issue,” he said. “You cannot increase staff numbers quickly.”

In the last month, bed capacity has only increased by 13.5 percent, from 1,021 to 1,159, according to the World Health Organization.

Meanwhile, more and more businesses are being allowed to operate as the government relaxes restrictions. This relaxation, however, has broken away from the four-stage lockdown easing plan published by the cabinet secretariat on Feb. 6.

Retail shops welcomed customers a week earlier than scheduled and reopenings have progressed, despite the failure to reduce cases to the plan’s target of under 2,000 per day. This has only been achieved four times since the plan’s release — each time on a Sunday or Monday, when lighter weekend testing tends to produce lower numbers.

For Khalife, the situation Lebanon now finds itself in was “entirely predictable” given the emergence of new strains, the failure of the government to control the virus via mitigation and worsening socio-economic conditions.

“I cannot see the government coming up with alternative solutions,” Abiad said. “A new lockdown is not going to be enforced.”

MP Assem Araji (Future/Zahle), the head of Parliament’s health committee, tweeted Tuesday night that he feared “corona may stay with us for a much longer period than expected” amid rising case numbers, pressure on hospitals and limited vaccinations.

The rollout of COVID-19 vaccinations is still progressing slowly, with only around 90,000 total doses of the Pfizer-BioNTech administered as of Tuesday, according to the Health Ministry. Just 5,110 people have received their second dose, which is required for maximum protection against the disease.

The first batches of the AstraZeneca vaccine, acquired via the international COVAX platform, are set to arrive this month, but have not yet been delivered. Rida al-Moussawi, a media advisor to caretaker Health Minister Hamad Hassan, said that the first batch of these vaccines will arrive next week.

But it is not only the coronavirus pandemic that health care workers have to grapple with — there are also the myriad pressures of the country’s economic and financial collapse.

The current unrest sparked by the record decline of the Lebanese lira and deteriorating general living conditions have also had an impact on the health care sector.

“People don’t realise how important oxygen is,” he said Wednesday. “We’re filling our tanks almost every other day.”

Wazni said that his hospital had not faced significant problems with supply due to the large capacity of the hospital’s oxygen tanks and the availability of an oxygen generator.

“But other hospitals that may not have these facilities could really face difficulties if oxygen isn’t delivered,” he added.

On Wednesday, the army deployed to clear roadblocks in the hope of preventing a repetition, and the Traffic Management Center reported fewer closures than in previous days.

“This country is falling apart,” Wazni said. “It’s getting harder to get all our supplies — fuel for generators, medicine, parts.”

Suppliers of medical equipment and pharmaceuticals are meant to be able to obtain subsidized dollars from Banque du Liban to cover 85 percent of the cost of their goods from abroad.

“There is a huge question over the supplies and whether the government will continue subsidies or not,” Abiad said.

Many importers are already facing payment delays from the central bank and are demanding upfront payment in dollars from hospitals.

“The health sector in Lebanon is like the Titanic,” Wazni continued. Right now we are sailing along, but one day soon, we will hit the iceberg.”

BEIRUT — With many of Lebanon’s businesses reopening their doors and some activities returning to normal, cases of COVID-19 have begun to creep up, bringing warnings that hospitals might soon be overwhelmed once again. On Wednesday, the Health Ministry reported 3,581 new cases of COVID-19 and 46 new coronavirus-related deaths. A day earlier, the Health Ministry registered the highest daily...