What Lebanese authorities are doing to reverse the lira’s fall, and why it won’t work 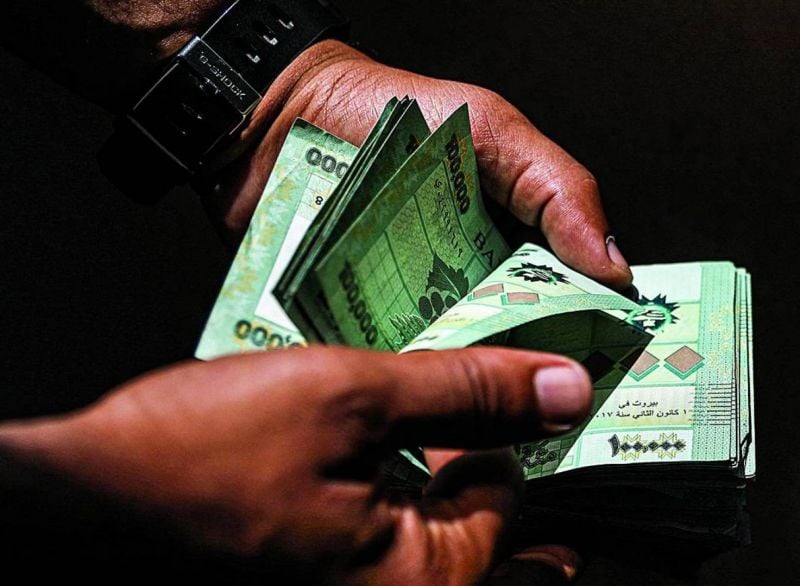 The lira sunk to a record low against the dollar Saturday. (Credit: Joseph Eid/AFP)

BEIRUT — As protesters block roads across the country after the lira’s substantial drop in value, hitting a record low of LL10,800 on Saturday, Lebanon’s policymakers leaped into action in an attempt to control the deteriorating currency.

On Monday, top officials held an economic and financial security meeting in Baabda. Among those present were President Michel Aoun, members of the caretaker cabinet, Banque du Liban Gov. Riad Salameh, the head of Association of Banks, members of the Syndicate of Money Changers and high-level security chiefs.

Afterward, officials announced a crackdown on licensed and illegal money changers who “speculate” against the lira and a block on electronic platforms that provide the market dollar price.

Along with cracking down on illegal exchange operations and exchange rate platforms, authorities called on ministries and security agencies to control the trade of hard currency except for “commercial, industrial or health sector purposes.”

But officials’ response to the depreciation echoes similar failed attempts at halting the lira’s slide, hinting that this time will be no different. Here’s what has been done so far this week, what happened the previous times authorities adopted this strategy, and why these policies fail to reverse the currency’s slide.

Lirarate.com, one of the major websites that provides the US dollar market price, stopped operating on Ogero’s network. However, residents can still access the website through mobile internet or by installing a virtual private network, or VPN.

Consequently, many shop owners decided to remain closed Tuesday, while another group blocked the roads in Chtoura with burning tires, protesting against the arrests and crackdowns.

Exchange houses in Beirut approached by L’Orient Today on Tuesday were closed but some exchangers did not stop operating. Some stood next to their shops, contacting those who they recognize as potential customers to check if they wanted to exchange.

“I closed my shop today to protect myself from being arrested,” an exchanger standing next to his shop in the Hamra neighborhood said on condition of anonymity since he’s trading at the “black market” rate.

“I am not doing anything wrong; my job is only to buy and sell currencies. They think by arresting exchangers, the rate will drop, [which] it will never do,” he fumed.

However, the exchanger was trading at huge spreads — the difference between a currency buy and sell rate — making exorbitant profits.

He was buying the US dollar for LL10,000 and selling it back at LL10,700, a LL700 difference. While the size of the spread often reflects uncertainty, it typically does not exceed LL300, even during periods of extreme volatility.

The idea of controlling the lira’s value by pressuring money changers has been tried before — twice, by the same officials, over the past year.

The first wave of arrests started in March 2020, when the local currency was trading at LL2,400 to the dollar. Army Intelligence started “monitoring and controlling” exchangers who did not price their dollars below LL2,000, a ceiling set by BDL.

But the operation turned out to be fruitless, as the currency continued to fall in price, trading at around LL4,000 to the dollar in April — double the ceiling imposed by the central bank.

On a Sunday night in April 2020, when the dollar was priced at LL4,200, BDL set the maximum selling rate of the dollar at LL3,200 — again a price far below the market rate.

The next morning, exchangers did not follow the newly fixed rate, and were surprised by forceful measures from multiple security forces. Dozens of money changers were arrested, including Mahmoud Morad, the head of the Syndicate of Money Changers.

The syndicate announced a strike and shop owners remained closed for more than a month, asking for the release of arrested exchangers in order to resume their activities.

During the closure, the lira kept trading around LL4,200 to the dollar, but this was ephemeral. Two weeks after exchangers resumed operations, the price of the dollar soared from LL4,200 to LL5,200.

Aiming to beef up the lira’s value, BDL started intervening in the market in mid-June of last year. This procedure, announced by Parliament Speaker Nabih Berri from Baabda, aimed to push the lira’s value toward LL3,200 to the dollar — a goal that was never reached, even after injecting “far more” than $100 million into the market, according to Morad.

Licensed exchangers were told to exchange at the BDL platform rate and “secure citizens’ needs of dollars” by supplying dollars to foodstuff and medical supply importers, employers of foreign domestic workers, and the families of students living abroad.

Exchangers who did not adhere to the LL3,900 rate nor to the assigned customers by the syndicate were considered illegal. Yet the lira’s value continued to fall.

Controlling the market, or pushing it underground?

The parallel market, which Lebanese officials regard as a “black market,” is in reality the only market where both individuals and non-subsidized retailers can buy foreign currency.

Regimes that try to control scare hard currencies will de facto create a new parallel market, where agents operate under the counter — or standing outside their shop, or by phone.

In such cases, market agents often take advantage of the situation by increasing their profit margins at the expense of the residents. Holders of dollar banknotes will end up selling their bills at a lower rate, while buyers of the scarce currency will pay a higher price, mainly due to trade barriers and restrictions. The “illegal exchanger” will benefit.

Such attempts to control the market also have an adverse impact on retailers who turn to exchange houses to convert their lira into dollars, as they will have trouble finding the needed foreign currency to cover their costs. Often, only those who have personal connections with exchangers will be able to find hard currency at the official rate.

Meanwhile, residents will continue to search for buyers and sellers of dollar banknotes via online chat rooms, such as Telegram and WhatsApp groups, where people set and negotiate the price that they find suitable — just as has happened in Lebanon.

While Lebanese authorities’ latest attempt to control the currency market may buy a bit of time, previous experience and market fundamentals suggest that this, too, is unlikely to reverse the lira’s fall.

BEIRUT — As protesters block roads across the country after the lira’s substantial drop in value, hitting a record low of LL10,800 on Saturday, Lebanon’s policymakers leaped into action in an attempt to control the deteriorating currency.On Monday, top officials held an economic and financial security meeting in Baabda. Among those present were President Michel Aoun, members of the...

A Lebanese company serves as an opaque Congolese electoral machine