With one week of lockdown left, doctors caution against squandering gains 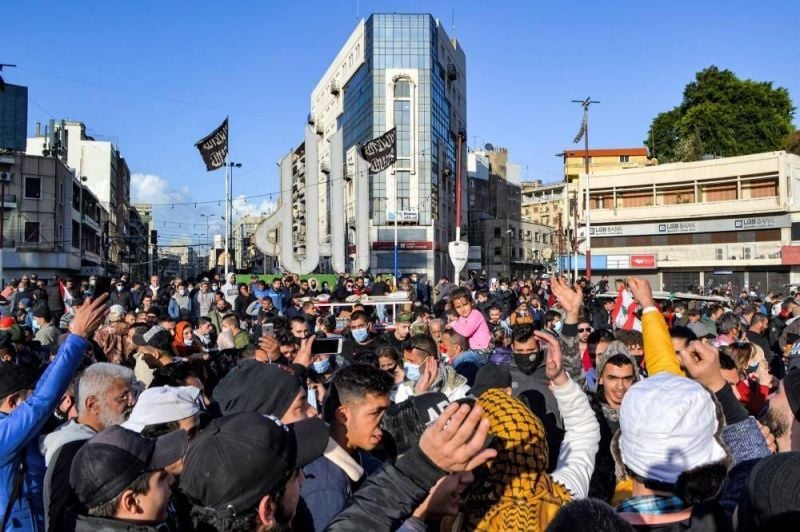 Medical professionals fear they will see a surge in COVID-19 cases as a consequence of ongoing demonstrations in Tripoli. (Credit: Fathi Al-Masri/AFP)

BEIRUT — Exactly one week before a 24-hour COVID-19 lockdown is set to end, doctors warn that Lebanon is not yet in the clear even as hospitals witness a small reprieve from a surge of coronavirus cases that has overwhelmed facilities across the country in recent weeks.

Daily death rates remained high Monday with 63 deaths registered by the Health Ministry, while ICU hospitalizations, now at 960, continued mounting. Lebanon recorded its lowest new infection rate since the New Year’s with 2020 infections, however the local PCR positivity rate was a whopping 46.5 percent due to low testing.

“The situation in the ICUs is still critical and bad; however, the influx of patients has slowed down a tiny amount over the past few days,” says Georges Juvelekian, the head of the ICU at St. George Hospital, commonly known as Mustashfa Roum.

Juvelekian attributes the slowing of critical cases to residents’ compliance with restrictions during the first 10 days of countrywide lockdown.

“For once people were scared, they were hit hard even in their own households, so they stayed at home,” Juvelekian tells L’Orient Today.

At Elias Hrawi Governmental Hospital in Zahle, “the situation is 10 to 20 percent better” than it was over the last couple of weeks, says hospital manager Joseph Homsi. “We have a tiny amount of breathing room now,” he says, but stressed that lockdown measures must continue in order to get numbers under control.

“We are only just starting to see the benefits of lockdown,” Homsi says.

Juvelekian agrees, adding that the fight against the virus is far from over and that the lockdown should not only be extended but also respected. “After the first 10 days we started loosening up like we always do … before we lift measures, [case] numbers need to be as low as possible and lockdown doesn’t work without compliance.”

Juvelekian warns that another surge is likely following a week of antigovernment protests in Tripoli, where hundreds of people in Lebanon’s impoverished second city denounced the lack of government aid amid lockdown restrictions. For seven consecutive days, angry protesters, many of whom were not wearing masks, clashed with security forces in the northern city’s streets.

“I think we’re going to lose the gains we made … after protests in Tripoli and other areas. We’ll see a surge down the line in 10 days as is customary with COVID-19, where you see effects weeks later,” he says.

Both Juvelekian and Homsi pointed out that there is an economic component to the health crisis that cannot be ignored.

“There is a layer of society, the underprivileged, those who are actually really in need, who are pushed by political and economic reasons to break the lockdown,” Juvelekian says.

Echoing these sentiments, Homsi says that “there is an economic and humanitarian factor. There are people who don’t have money to eat, but at the same time, as doctors and hospitals, we see people dying from COVID.”

For Lebanon’s most vulnerable residents, adhering to lockdown measures is impossible without government aid, especially for those who depend on work that cannot be done from home to cover their living expenses and most basic necessities during the economic crisis.

Whether authorities will extend the lockdown in its present form remains unclear. The 24-hour lockdown was initially set to end on Jan. 25, but it was extended until Feb. 8.

The head of Rafik Hariri University Hospital, Firass Abiad, tweeted Monday that while a “rapidly deteriorating situation has been stabilized,” there is still “high community spread and limited hospital capacity.”

An estimated 60-70 percent of COVID-19 cases in Lebanon have the N501Y mutation, the medical director of Hôpital Notre Dame des Secours in Jbeil, told L’Orient Today last week, citing studies conducted by St. George Hospital. The mutation, which is present in the UK and South African variants of the virus, has been shown to make disease more contagious.

Abiad said a lockdown extension is ideal but questioned the public’s ability to comply with restrictions.

“The presence and spread of the more contagious UK variant complicates matters,” Abiad warned, adding that “an uncontrolled easing of the measures can inadvertently lead to the loss of all gains from the lockdown.”

BEIRUT — Exactly one week before a 24-hour COVID-19 lockdown is set to end, doctors warn that Lebanon is not yet in the clear even as hospitals witness a small reprieve from a surge of coronavirus cases that has overwhelmed facilities across the country in recent weeks.Daily death rates remained high Monday with 63 deaths registered by the Health Ministry, while ICU hospitalizations, now...