Nayla al-Hage, a French-Lebanese engineer, is the only woman detained in relation to the Beirut port explosion probe. She was in charge of technical control at the warehouse site where tons of ammonium nitrate had been stored for years. Her family maintains her innocence. Their claims, however, are met with a wall of silence on the part of the judge entrusted with the case. 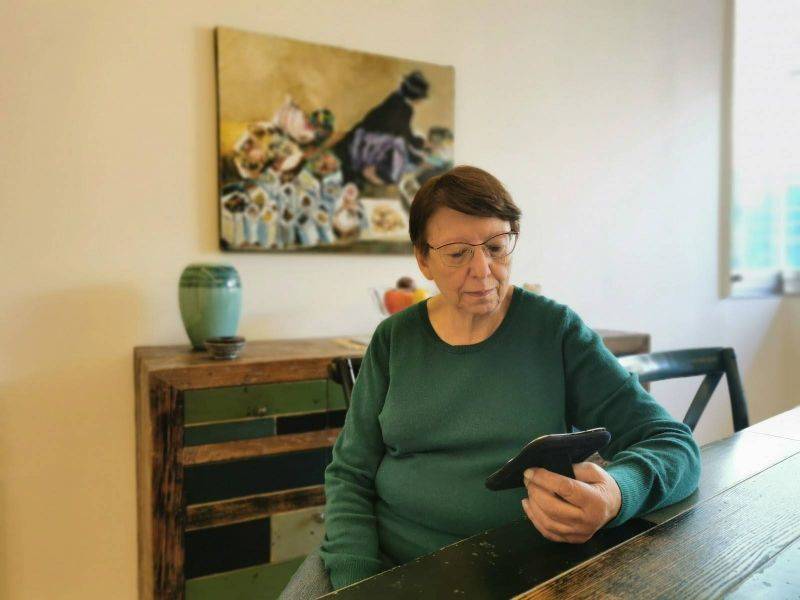 In her daughter’s apartment, Geralda al-Hage looks at a photo of Nayla as a child. (Credit: Marie Jo Sader/OLJ)

“Fortunately, Nayla was not at home when the explosion went off. She loved to sit in this chair, right under this painting that was completely torn to pieces. She would have been disfigured,” says Geralda al-Hage, Nayla’s mother, who finds some consolation in the fact that her daughter survived the blast, despite her unexplained detention.

Her eyes flicker around her daughter’s newly repaired home in Mar Mikhael, a neighborhood that was ravaged by the blast.

On the day of the explosion, Aug. 4, the 42-year-old engineer left the port at 4 p.m. and headed to Jal al-Dib for a meeting with a business partner. The traffic was dense, prompting her to call her partner and suggest that they meet at her place. But the latter did not answer. Conscientiously, she decided to drive to her initial destination. It was a wise decision. Her apartment was completely destroyed by the blast that tore through the capital at 6:08 p.m.

At that precise moment, it did not even occur to Hage that the catastrophe was triggered from the warehouse where she had been a few hours earlier with workers and other port employees. That day, she escaped death twice, but 200 other people were not as lucky.

Hage grew up in France, where she obtained her civil engineering degree from the prestigious Special School of Public Works, Building and Industry (ESTP) in Paris.

She had lived most of her life abroad before she moved to Lebanon in 2015. She started working at the Beirut port two years ago, with an international service provider specializing in technical control.

Hage’s mission was to ensure that work on port infrastructure was carried out in compliance with technical standards. She also wrote reports to this effect.

Her report on the operations carried out in warehouse 12, which was to be handed over to the port authorities on Aug. 5, is now in the judiciary’s possession.

Repair work had been ongoing for three days before the blast at the warehouse site, which had safety and security hazards, according to a May report by State Security Maj. Joseph Naddaf, who raised red flags regarding the situation.

The document, reviewed by L’Orient-Le Jour, mentions in black and white the danger of an explosion occurring as a result of the storage of ammonium nitrate in warehouse 12 and the risk of theft of the materials inside, given that the warehouse’s walls and holes and its doors were damaged.

On May 28, Naddaf’s report arrived on the desk of Ghassan Oueidat, Lebanon’s top prosecutor, who ordered that work start at the warehouse.

According to Naddaf’s internal investigation, as relayed in his report, most port and customs officials, as well as many senior government officials, had been aware of the presence and nature of the materials inside warehouse 12 for some time.

Yet the people who were directly involved in the work at the site, notably the welding contractor and his workers, as well as the technical control team, namely Hage, had not been informed of the presence of the chemical stored in the 8,000-square-meter building.

“My daughter was not in Lebanon when the vessel of death [the ship carrying the ammonium nitrate] docked at the port. She is not in charge of the goods inventory and she did not even know what was inside that warehouse. So why is she locked up?” Hage’s mother asks. To date, Hage’s family has received no answer to this question. 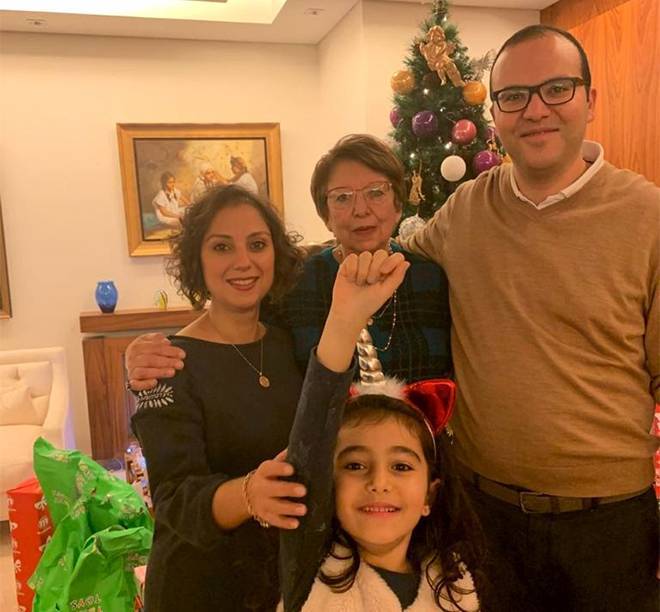 Nayla al-Hage, left, with her mother, brother and niece.

The family’s attempts to obtain further information from the investigative judge in the case, Fadi Sawwan, have been in vain, and their requests for parole have been rejected.

Sawwan has so far worked in the greatest secrecy. Defendants and their lawyers are prohibited from direct communication with his office.

“All we want is for the judge to do his job and tell us what exactly is the charge that Nayla is looking at,” says her brother Fouad. He sorrowfully recalls the day his sister expressed to him her fears that she might be made a scapegoat for what happened after having received a call summoning her for questioning. She never returned home from the interrogation.

Work at warehouse 12 was initially set to take place with the building’s doors closed. But when they noticed that one door was off its track, the contractor, Salim Chebli’s company, requested that the door be taken down in order to repair it. Behind this door, the construction workers and Hage found big white bags piled on top of each other.

Hage took a few steps into the warehouse and noticed the chemical formula written on the bags. A quick internet search told her that it was fertilizer. Nothing alarming, she thought.

Was she aware that alongside these substances, tons of fireworks and highly flammable materials — such as gasoline, kerosene and hydrochloric acid — were stored?

Answering this question, her lawyer, Akram Maalouf, says that she was never provided with an inventory list, but when the warehouse door was opened, workers at the port warned her and the contractors of the presence of flammable materials.

Works at the site continued over the next few days, with welding done outside the building and away from the ammonium nitrate bags.

On Aug. 4 at 1:45 p.m., Hage finished her job at the warehouse, and the workers moved on to work on another site.

According to a judicial source, the workers left two hours prior to the outbreak of the fire that caused the explosion.

“There is no way that the welding was the source of the fire. All of the collected information reveals that the fire started in a different area from where the welding work took place. What’s more, the workers were welding outside the warehouse and not inside it,” the source says.

“Nobody believes it! Besides, Nayla told me that a few days before the explosion, they carried out welding work for hours. If welding caused the explosion, the blast should have taken place on that day. On Aug. 4, they were micro-welding only,” the brother adds.

Other judicial sources familiar with the case are of the same opinion: nothing proves that the welding was the cause of the fire, and to date, the investigative judge has not determined what started it.

The pertinent question is whether or not Sawwan is still considering this premise and if Hage remains in custody based on these grounds.

“Nayla has no responsibility whatsoever. Legally speaking, she does not represent the client — that is the port — nor the contractor who performs the works, over which she has no authority. This is the proof that she is not guilty,” Maalouf says.

Ready to stay locked up, if her detention can help

Since there are no units for women at the Rihanieh military prison in Baabda, Hage is held in a container there. Her relatives can see her one to three times a week, but a visit to the prison is no easy feat.

In order to visit her, each of her relatives must, on a weekly basis, obtain authorization from the Justice Palace. These visitation permits take a long time to be issued. Then at the prison, after long waiting hours and a series of clearances, visitors get only 15 minutes to see her, strictly timed and under the supervision of two guards. Hage’s relatives bring her clean clothes and money so that she can pay for her meals.

“She has a PCR test every month. I asked her if they make her pay for it,” says Geralda, her mother, jokingly. Her brother Fouad has tried to improve the conditions of her detention.

“All of our attempts have failed. I even contacted the French Embassy. The consul told us that there was nothing he could do because Nayla has dual nationality, so she is subject to Lebanese law,” he says.

For months, Hage’s cell contained nothing but a mattress thrown on the floor. It was only recently that she was given a table and a chair.

“I have the means and the time to endure all these conditions [that are set on visits], but I wonder how the poor are doing, or those who cannot take time off from work,” Fouad says.

Ultimately, for the Hage family, it is mostly about mistrust of the justice system.

“My sister told me that if her detention could allow the judge to find out the truth, she would be ready to stay there for another year. But we are fooling ourselves. Everyone knows that the truth is going to stay hidden, so the innocent might as well be left alone,” Fouad laments.

This article is the second in a two-part series. Find part one here. The series was originally published in French. Translation by Sahar Ghoussoub.

Justice served? 25 people were detained after the port explosion, but don’t know the charges against them — part I of II

“Fortunately, Nayla was not at home when the explosion went off. She loved to sit in this chair, right under this painting that was completely torn to pieces. She would have been disfigured,” says Geralda al-Hage, Nayla’s mother, who finds some consolation in the fact that her daughter survived the blast, despite her unexplained detention.Her eyes flicker around her daughter’s newly...