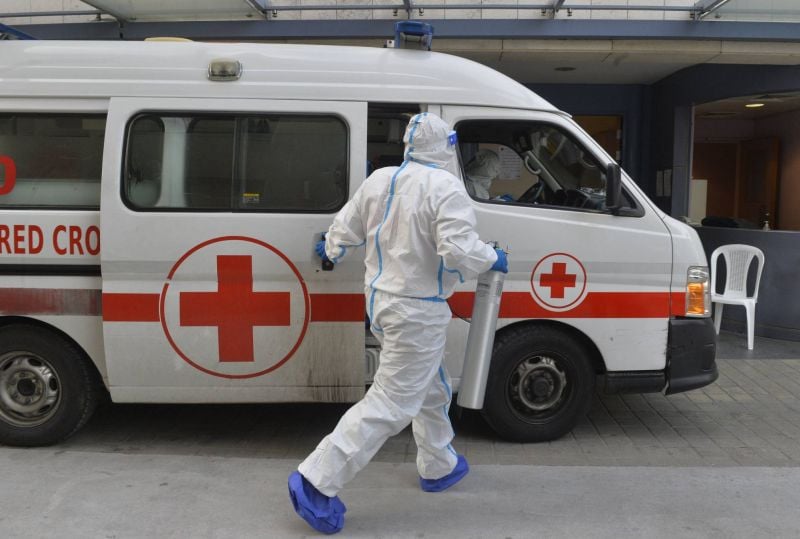 The Lebanese Red Cross said Monday that it had received 4,275 calls over a 24-hour period. (Credit: Hussam Shbaro)

Following 24 hours of rumors and media leaks, the Higher Defense Council unveiled a new, more aggressive 11-day lockdown in the hope of regaining some control over the pandemic.

It comes just five days after a more relaxed three-week lockdown came into force amid criticism from health professionals for its many exceptions.

The new measures, starting on Thursday and lasting until Jan. 25, remove the vast majority of these, leaving only a few groups exempt from a round-the-clock curfew, including medical staff, military and security officials, journalists and diplomats.

At the start of the council’s meeting, President Michel Aoun called for a state of health emergency, saying “the tragedy we are seeing at the doors of hospitals requires drastic measures.”

Over the last couple of weeks, coronavirus cases have skyrocketed and hospitals are under immense pressure, having to turn patients away if no beds are available.

The Lebanese Red Cross said earlier Monday that it had received 4,275 calls to its emergency hotline over the past 24 hours.

“Almost every COVID-19 intensive care unit in the country is completely occupied,” Sleiman Haroun, the head of the private hospitals’ syndicate, told L’Orient Today, explaining that patients who arrive at hospitals in critical condition are often having to receive treatment in the emergency room when no beds are available.

“Private hospitals are trying to add more beds as fast as possible,” he continued, “but we simply can’t keep up.”

“We are close to facing hell,” he added.

In the last seven days, Lebanon registered 30,252 new cases of COVID-19 — more than the number of cases from the first seven months of the pandemic combined: 29,987 cases were recorded between Feb. 21 and Sept. 21.

In an effort to help overstretched hospitals cope with the surge, the Lebanese Order of Physicians appealed to doctors to postpone any non-emergency treatments and surgeries, asking them to prioritize COVID-19 patients instead.

Under the new lockdown, there will be a 24-hour curfew with the majority of public and private institutions to close.

Grocery stores, supermarkets, restaurants and other food stores will remain open exclusively for delivery and only factories producing food and medical supplies will be allowed to operate.

Zeina Jamaluddine, a public health and nutrition researcher, said that this decision marginalizes vulnerable people at a time where food insecurity among Lebanese and refugee populations is rising.

“We do not have the delivery capacities like those in high income countries,” she said. “In the most vulnerable areas the concept does not exist.”

The Higher Defense Council decision stated that the army will be handing out cash payments of LL400,000 ($45 at a market rate of LL8,800) to some 280,000 families across the country in the next few days, in an apparent attempt to support them to remain at home.

Despite rumors to the contrary, the Beirut airport will remain open, but passengers arriving from five cities — Istanbul, Baghdad, Cairo, Addis Ababa and Adana — will be required to quarantine in a hotel for seven days upon arrival, compared with a maximum of 72 hours for other passengers.

However, coming to an agreement on the shape of these new measures did not run smoothly.

Caretaker Health Minister Hamad Hassan, who has in the past publicly disagreed with some of the government’s actions, initially refused to attend today’s meeting of the COVID-19 ministerial committee, which took place prior to that of the Higher Defense Council.

A source at the ministry said on condition of anonymity that Hassan had not wanted to attend because he was “unhappy” with the committee’s failure to shut down the country during the Christmas and New Year’s holidays.

Hassan did not make public comments explicitly criticizing the policy at the time. He did not respond to requests for comment.

Doctors and health officials have warned that the full consequences of the holiday gatherings and parties have still not hit the health care sector and that they are expecting an even larger surge of hospitalizations in the coming few weeks.

Ahead of the ministerial committee meeting, Diab said that a “complete, strict and firm closure of the country” was necessary “to protect the Lebanese from themselves.” The premier has also previously blamed the general population for the failure of the state’s policies regarding the disease.

After local TV stations erroneously reported on Sunday night that supermarkets would be closed during the lockdown, grocery stores and other food shops were packed with people trying to stock up.

Dozens of people shared photos on social media of empty shelves and long lines of people waiting outside.

Delivery company Toters had to suspend orders and delivery from grocery stores for a few hours because of a significant surge in demand, said Nael Halwani, a Toters co-founder.

Myriam, a 36-year-old freelance translator and editor, went to the Hazmieh branch of supermarket chain Spinneys at 11 a.m. this morning, choosing that time to avoid large crowds as usual.

“But today, everyone was on top of each other,” she said. “Meat and bread products were mostly missing, and if I had arrived just 30 minutes later, they would have run out.”

Her husband, Kamal, said that even the mere discussion of closing down supermarkets “was truly irresponsible” and increased the risk of people crowding into indoor spaces.

The head of the food importers’ syndicate, Hani Bohsali, urged people to avoid flocking to the supermarkets and offered reassurance that there are enough food supplies in the country to last at least two months.

The measures announced Monday will have a major impact on businesses. Paul Abi Nasr, a member of the board of directors of the Association of Lebanese Industrialists, said the forced closure of factories could cause “irreversible damage” as companies could lose foreign clients.

The caretaker industry minister himself, Imad Hoballah, also appeared critical of the measure, tweeting that the decision is “unlike any lockdown imposed in other countries.”

Jade Khalife, a physician specialized in health systems and epidemiology and a member of the Independent Lebanese Committee for the Elimination of COVID-19 (ZeroCovidLB), said that the new measures overall are “serious” but things like relying only on supermarket delivery could prove logistically challenging.

He also questioned the government’s long-term strategy for dealing with the virus. “The focus is on the lockdown, but what comes next?”

BEIRUT — Lebanese authorities have announced sudden, dramatic measures as the COVID-19 pandemic tests the limits of the country’s health care system, pushing hospitals to capacity.Following 24 hours of rumors and media leaks, the Higher Defense Council unveiled a new, more aggressive 11-day lockdown in the hope of regaining some control over the pandemic.It comes just five days after a more...

Hospitals at capacity, mounting deaths, winter storm: Everything you need to know to start your Monday

Dangerous liaisons: How the ‘system’ got the better of the ‘technocrats’ — part II of II

Emergency vaccine vote, hospitals overwhelmed, storms ahead: Everything you need to know to start your Friday