‘The real surge hasn’t even started yet’: Lebanon locks down again, but it may be too little, too late 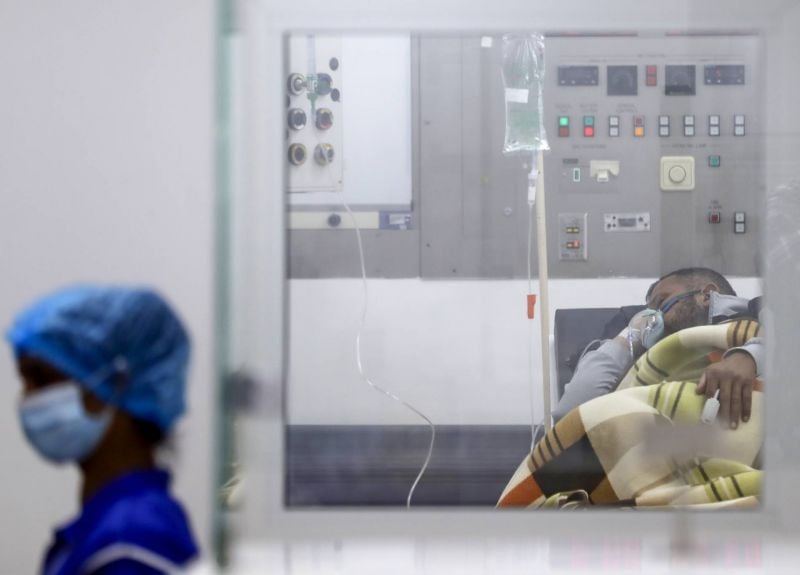 BEIRUT — Starting Thursday, Lebanon will enter a three-week countrywide lockdown in a desperate attempt to hold back a dangerous surge in COVID-19, strikingly accented by Wednesday’s record infection numbers.

The restaurants, bars, cafes and clubs that remained open in the hope of a boost in business over the Christmas and New Year’s holidays have been ordered to shutter their doors once again, and movement will be curbed by an overnight curfew and driving restrictions.

But the new measures may be too little, too late, say health workers and MPs, as hospitals are barely able to keep up with the increasing number of hospitalizations and are being forced to turn patients away.

“We have reached full capacity and the real surge hasn’t even started yet,” said Pierre Bou Khalil, the head of pulmonary and critical care at the American University of Beirut Medical Center.

On Wednesday, the country registered a new daily record with 4,166 COVID-19 cases, and on Tuesday the death toll from the virus crossed the 1,500 threshold.

However, the consequences of lifting the lid on restrictions over the festive period to allow gatherings and parties have still not fully begun to show, as there is a delay between infections and hospitalizations.

It takes around 10 days to start seeing infections and up to three weeks for those infections to translate into people falling critically ill and needing hospital care, explained Firass Abiad, the manager of Rafik Hariri University Hospital.

“The challenges of everything that happened during the festive period will probably start hitting us in mid-January,” he said.

The parliamentary health committee has called for the new lockdown measures to be reviewed, saying that the multiple exceptions, such as for patisseries, exchange shops and flower shops “give the virus another opportunity to continue its lethal spread.”

Caretaker Health Minister Hamad Hassan himself has previously said publicly that the “odd-even” rule, whereby cars drive on alternate days of the week depending on their license plate, is ineffective and even creates more of a risk as passengers choose shared transportation options.

“From A to Z, this lockdown is wrong,” said MP and health committee member Fadi Alameh (Amal/Baabda), adding, “This is the opinion of the entire committee.”

Previous attempts at closing down the country have failed through a combination of lack of enforcement, lobbying from private businesses and the government’s failure to provide adequate financial support to vulnerable groups and those who depend on day-to-day earnings.

“Lockdowns delay rather than stop [a surge in the virus], unless you’re talking about a very long lockdown of six to eight weeks with zero exceptions,” Abiad said. “You cannot play catch-up with a virus, specifically with this virus.”

George Kettaneh, the secretary-general of the Lebanese Red Cross, said earlier this week that ambulances are transferring around 100 suspected coronavirus patients to hospitals every day.

But hospitals are running out of space and are being forced to hold patients temporarily in the emergency room in the hope of beds in intensive care units freeing up.

According to the latest figures from the World Health Organization, 88 percent of Lebanon’s intensive care beds are occupied, and the occupancy rates in some areas are even higher: 95 percent in Akkar, 94 percent in Mount Lebanon and 93 percent in Beirut.

“We are beyond containing the virus and we are in a situation of mitigation, controlling the number of cases,” said Eid Azar, an infectious disease specialist at St. George University Hospital, more commonly known as Mustashfa Roum. “The primary priority now is dealing with the very sickest patients.”

There are 15 beds in the ER, where patients wait until space is made available on a ward. All of them were full when L’Orient Today spoke with Abiad on Tuesday evening.

Houssein Toufayli, a resident doctor at Nabatieh Governmental Hospital, said the COVID-19 unit is running at full capacity and that staff and nurses are “completely burned out.”

“We are seeing a lot of patients, a lot of deaths,” he added. The small hospital has already lost four patients this week.

The health minister has urged private hospitals to increase ICU capacity within a week, threatening to suspend contracts with public insurance funds if they fail to do so.

This time frame will be difficult to meet, said Alameh, who is also the vice president of the private hospitals’ syndicate, particularly as the state has failed to settle its dues to private hospitals dating back years.

“Even if they did come up with the money, it could take weeks to bring in the equipment needed,” he said.

Hospitals are also suffering from severe staff shortages, either because health care workers have left the country amid increasingly difficult working and living conditions, or because they have been infected with COVID-19.

According to Charaf Abou Charaf, the head of the Lebanese Order of Physicians, over 200 doctors are currently in self-isolation.

“If this continues and doctors and nurses become infected, who will treat the patients?” he asked.

Now, as the lockdown begins, hospitals are readying themselves for what is expected to be Lebanon’s worst increase in COVID-19 cases yet.

“We can see the wave is approaching,” Bou Khalil said, “but all we are able to do is brace for impact.”

BEIRUT — Starting Thursday, Lebanon will enter a three-week countrywide lockdown in a desperate attempt to hold back a dangerous surge in COVID-19, strikingly accented by Wednesday’s record infection numbers.The restaurants, bars, cafes and clubs that remained open in the hope of a boost in business over the Christmas and New Year’s holidays have been ordered to shutter their doors once...