After its release from Lebanon, a mysterious fuel ship hid its voyage to Syria 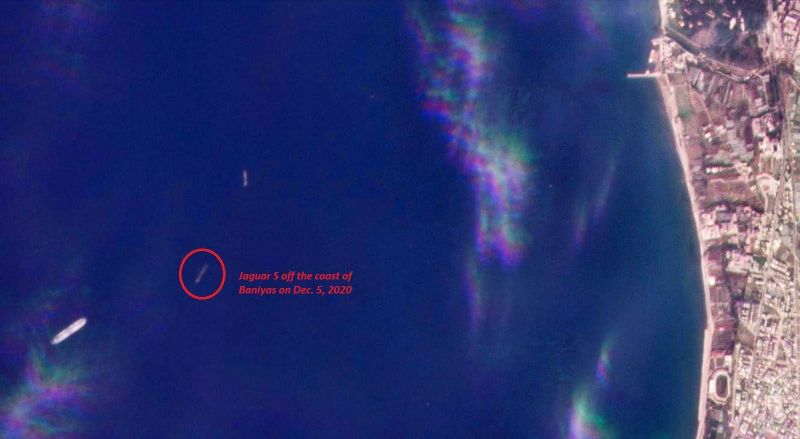 Planet Labs Inc. satellite imagery, analyzed by TankerTrackers.com with the use of MarineTraffic.com data, shows the Jaguar S off the coast of Banias, Syria, on Dec. 5, days after leaving Lebanon.

BEIRUT — A fuel ship at the center of a judicial probe quietly left Lebanon in the beginning of December before undertaking a furtive trip to Syria, a voyage uncovered through satellite imagery analyzed by a firm tracking oil shipments.

Mystery has swirled over the Jaguar S, an oil products tanker owned and managed by shell companies that arrived off the coast of Zahrani in late September. Lebanon Oil Installations, which operates the petroleum terminal in Zahrani, said on Oct. 3 that it had no knowledge of the suspect vessel.

The following day, Lebanese army intelligence arrested four Lebanese nationals in relation to the “illegal entry” of the Jaguar S into Lebanese waters, kicking off a judicial investigation into the matter while the tanker was stopped off the coast of the country.

The Appellate Court of the South’s public prosecutor took on the case, ordering the arrest of the vessel’s captain and its maritime agent, while referring the investigation to the court’s first investigative judge. The result of the investigation has not been publicized, with the vessel departing from the shores of Lebanon on Dec. 1, according to data from MarineTraffic.com

The court’s office of prosecution did not provide comment to queries from L’Orient Today regarding the investigation and the release of the Jaguar S. The state-operated National News Agency, meanwhile, reported that the cargo manifest papers for the 4 million liters of benzene on board the vessel were “fraudulent,” adding that the fuel belonged to a Syrian firm.

With more questions raised than answers following its detention, the Jaguar S set off for a brief five-hour stop at the anchorage off the coast of Iskenderun on Dec. 2, after which it apparently attempted to conceal its movements to Syria.

In the early hours of Dec. 3, the vessel stopped transponding its location, a tactic commonly used by vessels attempting to evade the US’ growing sanctions on oil shipments to Syria. This method of going dark, however, has not stopped US firm TankerTrackers.com from determining the movement of illicit oil shipments with the analysis of satellite imagery, MarineTraffic.com data and other sources.

TankerTrackers.com revealed to L’Orient Today that satellite imagery from Dec. 5, provided by Planet Labs Inc., shows the Jaguar S off the coast of Banias, the primary point for unloading petroleum products to a nearby refinery.

“It was definitely intentional,” TankerTrackers.com CEO Samir Madani said about the Jaguar S turning off its transponder off the coast of Syria as a bid to elude detection.

This was not the first eyebrow-raising trip made by the Jaguar S to Syria. On Jun. 13, the tanker was spotted off the coast of Banias, according to Madani, as first reported by Forbes in October.

Days prior to turning off its transponder to undertake the June trip to Banias, the Jaguar S briefly signaled that it had received orders to sail to Jiyyeh, Lebanon, before changing its destination to Mersin and then to awaiting orders.

Maritime records from MarineTraffic.com show the Jaguar S briefly changing its destination to Jiyyeh, Lebanon, before its June trip to Banias, Syria.

Just as the circumstances of the Jaguar S’ voyages to Syria and Lebanon remain shrouded in secrecy, the vessel’s owners and operators are obscured by layers of front companies.

Neither firm responded to queries from L’Orient Today, while Turkish corporate records show that Dry Denizcilik Ve Gemi Islet was dissolved on Aug. 31, weeks before the Jaguar S arrived at Lebanon’s coast. The manager of the now-closed firm also did not respond to comment.

Even the Jaguar S’ flag remains a question of debate. MaritimeTraffic.com data shows that the vessel changed its flag from Mongolia to Panama on Aug. 24. Panama’s Maritime Authority told L’Orient Today that the vessel has not been registered under the country’s flag since 2019 and was flying a Mongolian flag, while a representative of the Mongolia Ship Registry — who said he spoke to Lebanese authorities — insisted the vessel had left its auspices and re-flagged under Panama.

The wall of silence around the Jaguar S is just another in a series of Lebanese links to petroleum product shipments to Syria, a country starved of fuel with an economy buckling under the weight of international sanctions and the financial meltdown in neighboring Lebanon.

Washington has accused Beirut-based front companies of facilitating the oil trade to Syria, blacklisting them in recent years while their beneficial owners remain unclear. Concrete answers on the issue remain elusive, more so than the vessels moving the petroleum.

BEIRUT — A fuel ship at the center of a judicial probe quietly left Lebanon in the beginning of December before undertaking a furtive trip to Syria, a voyage uncovered through satellite imagery analyzed by a firm tracking oil shipments.Mystery has swirled over the Jaguar S, an oil products tanker owned and managed by shell companies that arrived off the coast of Zahrani in late September....