Judicial sources said interrogations had been scheduled for Feb. for 15 people, including the top security officials, public prosecutor Ghassan Oueidat, two former ministers and Hassan Diab, who was the prime minister at the time of the blast. 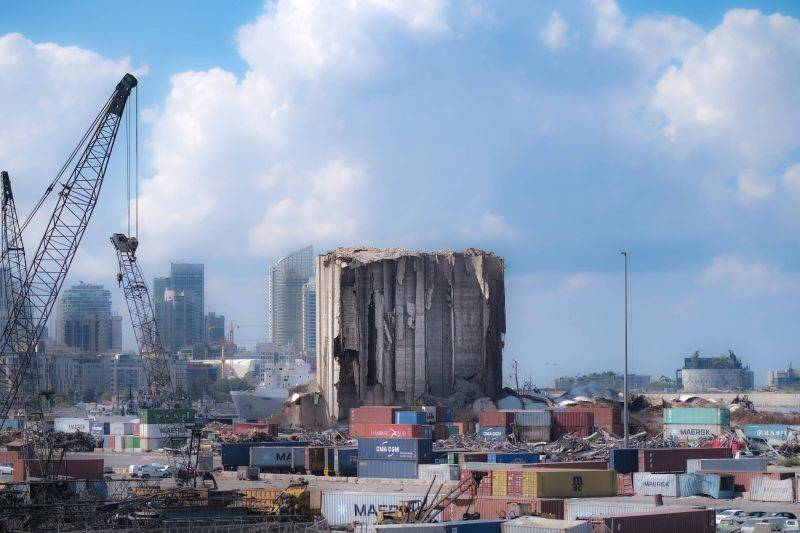 A view of the Beirut port silos in Oct. 2022. (Credit: João Sousa/L'Orient Today)

BEIRUT — The judge probing the 2020 Beirut blast has charged Tuesday Lebanon's top public prosecutor, the then-premier and other senior current and former officials in connection with the devastating explosion, judicial sources said and court summons show, according to Reuters.

The decision to prosecute a public prosecutor is unprecedented in the history of Lebanon.

Bitar, who has unexpectedly resumed an inquiry that has been paralyzed by high-level political resistance, has scheduled questioning with Oueidat, Diab, and other officials for February, the sources told Reuters, without specifying the charges.

A judicial official who spoke to AFP on condition of anonymity said that Oueidat and the three judges have been charged with "homicide, arson and sabotage." According to Reuters, Bitar has charged prime minister Hassan Diab and former ministers with homicide with probable intent, according to court summons seen by Reuters on Tuesday.

Reuters could not immediately reach Diab or Oueidat for comment.

Following Bitar's decision to charge Oueidat, the top prosecutor told Bitar in a letter that his probe into the Beirut port blast remains suspended, according to correspondence seen by Reuters.

"We learned of the return of Judge Bitar through the press. Since he considers the prosecution as non-existent, we also consider [his return] as non-existent", Oueidat told AFP.

Bitar's efforts to interrogate top officials over the explosion that killed 220 people and shattered parts of Beirut have been hindered by factions including the heavily armed, Iran-backed Hezbollah.

Interrogations of 14 people (not 15 as previously mentioned), including senior security officials, are reportedly scheduled to take place between Feb. 6 and 13, according to a judicial official cited by AFP.

Diab, who headed the government at the time of the Aug. 4, 2020 explosion, had previously refused to appear.

All those previously charged by Bitar have denied wrongdoing.

The explosion on Aug. 4, 2020 was caused by hundreds of tons of ammonium nitrate that had been stored at the port in poor conditions since it was unloaded in 2013. So far, no senior official has been held to account.

Bitar met French judges visiting Beirut last week as part of a French investigation into the explosion, whose victims included two French nationals. He was unable to share documents with them because the investigation was frozen.

Politicians that Bitar had sought to question, including Hezbollah allies, made dozens of legal challenges disputing his right to interrogate them and saying he had overstepped his powers.

The investigation was paralyzed in early 2022 by the retirement of judges from a court that must rule on several such complaints against Bitar before he can continue.

The court has been awaiting the appointment of new judges to resume its work, a step authorities have not taken.

Bitar resumed work on the basis of a legal interpretation challenging the reasons for its suspension, the judicial sources said.

Hezbollah has campaigned against Bitar as he sought to question its allies and accused Washington of meddling in the probe. Hezbollah leader Hassan Nasrallah called for him to be replaced.

Meanwhile, US State Department spokesperson Ned Price said Monday during a press conference: "We in the international community have made it clear since the explosion that we support and urge Lebanese authorities to complete a swift and transparent investigation into the horrific explosion at the Port of Beirut."

"The victims of this explosion in August of 2020 deserve justice. Those responsible must be held accountable," added Price.

Spokesman for United Nations Secretary-General António Guterres, Stéphane Dujarric, said for his part that the UN welcomes the reopening of the investigation, and stated that Guterres "has been very clear from the start that Lebanon, the victims of the blast, the families of the victims of the blast, which include some of our colleagues, are owed a strong investigation that will lead to accountability for those who had a hand in allowing this disaster to take place."

According to Dujarric, Guterres stated that it is not up to the UN to dictate how the Lebanese government goes about this investigation and that he can "only speak to what we would like to see and that is a strong, open and transparent investigation and accountability."