What room for maneuver does the Mikati government have?

Constitutional experts agree that public services must be maintained during the double vacancy in the executive branch. 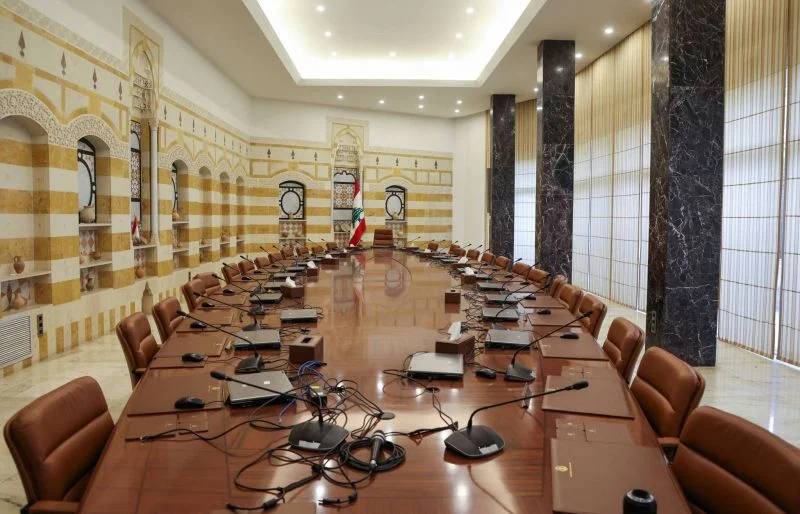 The table where the Lebanese president presides over cabinet at Baabda Palace. (Credit: Mohammad Azakir/Reuters)

There is no new president, and the government is a caretaker cabinet.

After former President Michel Aoun’s term of office expired Oct. 31, and Prime Minister-designate Najib Mikati failed to put together a new cabinet, the country is for the first time facing a double vacuum at the executive level.

The vacuum is likely to persist, with no sign of Parliament being able to reach a consensus on a new head of state, the 14th president of the republic since independence.

The situation is all the more worrying for a country grappling with an economic and financial crisis, which demands the implementation of an action plan as soon as possible.

Amid the chaos, one question is now on everyone’s lips: what room for maneuver does the caretaker cabinet have to govern the country?

While Lebanon’s double vacancy is unprecedented, the absence of a president or a government is well-explored territory.

L’Orient-Le Jour calculated that since the withdrawal of Syrian troops in April 2005, it took Lebanese politicians an average of 111 days to form a government.

The country also experienced more than two and a half years without a head of state before the election of Aoun on Oct. 31, 2016, as the presidential election had been blocked by the Free Patriotic Movement and Hezbollah in order to ensure the victory of their candidate.

During this period, the government of Tammam Salam assumed the powers of interim president, in accordance with Article 62 of the constitution.

“In practice, after Michel Sleiman's term came to an end in 2014, there was a two-year vacancy period that lasted until 2016. [Political] compromise became even more central to the functioning of the government,” Ashraf Rifi, former Minister of Justice in the Salam cabinet, told L’Orient-Le Jour.

This situation is illustrated by the “24 carats” equation. “Each of the 24 ministers was one of the 24 carats that make up the presidency,” Rifi explained.

Some observers, however, believe that during such a presidential vacancy, ministers become overmighty.

“Since unanimity becomes so central, each of the ministers has real veto power, a power that even the president does not have,” constitutional expert Rina Constantine told L’Orient-Le Jour.

“Of course, consensus and veto power create some complications, but the country continued to function more or less normally during the long power vacuum,” Rifi said, adding that, “In terms of the internal functioning of my ministry as well, nothing has really changed.”

At that time, Salam’s government had not resigned and exercised its full powers. This is unlike Mikati’s cabinet, which resigned in June in the wake of the May 15 legislative elections that resulted in a new parliament.

“Even in normal times, all the prerogatives of the president cannot be transferred to the government,” Constantine said. “The cabinet cannot, for example, sign the decree forming a new government or accredit an embassy. In this sense, the Salam cabinet is not so different from Mikati’s.”

Constantine explained, “The government of Najib Mikati is managing the day-to-day public affairs, keeping at a minimum, and must convene only in emergencies.”

At the end of Aoun's term, Mikati has pledged not to convene Cabinet, except in cases of emergency.

Ministers close to the Aounist camp have also threatened to boycott any meeting that the caretaker prime minister might convene. In this they were supported by their colleagues in Hezbollah.

“I believe that Parliament should not pass any laws during this period," Constantine said.

“The first priority must be the election of the head of state, since Parliament has become an electoral college. On the other hand, Article 57 of the constitution stipulates that the president, who is the guardian of the constitution, can ask Parliament to deliberate on a bill a second time. In the absence of a head of state, the work of the legislature goes out of control,” she explained.

For Hassan Rifaï, another constitutional expert, the situation is more nuanced.

“Managing day-to-day [business] must be maintained, especially since Parliament and the judiciary continue to monitor the government. Thus, the Mikati cabinet must be able to meet to vote on a budget if, for example, it is necessary to reach an agreement with the International Monetary Fund,” Rifai told L’Orient-Le Jour.

“If the government exceeds its prerogatives of managing routine affairs, by taking a decision that is not necessary for maintaining public services, the judiciary can intervene and annul the said decision for example,” he explained.

“Some people question the legitimacy of this government for political reasons and to divide public opinion between Christians and Sunnis,” Rifai said, adding, “But what alternative is there to the caretaker cabinet? It is a de facto government, and we have to navigate with the means at hand.”

This story was originally published in French in L'Orient-Le Jour, translated by Sahar Ghoussoub.

There is no new president, and the government is a caretaker cabinet.After former President Michel Aoun’s term of office expired Oct. 31, and Prime Minister-designate Najib Mikati failed to put together a new cabinet, the country is for the first time facing a double vacuum at the executive level.The vacuum is likely to persist, with no sign of Parliament being able to reach a consensus on a...