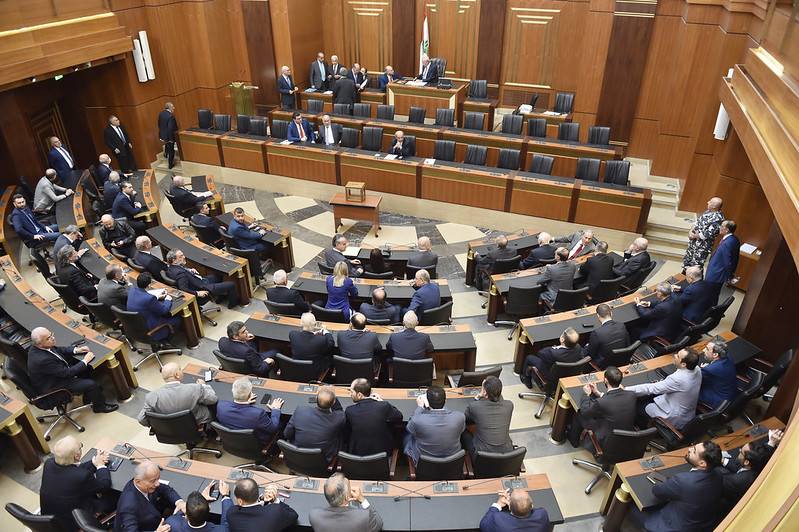 Lebanon's Parliament met starting at 11 a.m. Tuesday to elect new parliamentary committees and secretaries and to vote on a number of laws including an amended version of a law that would lift banking secrecy, which President Michel Aoun had sent back to Parliament.

Mneimneh was the only Forces of Change MP represented in the Finance and Budget committee which is required by the International Monetary Fund to approve crucial financial reforms in exchange for a $3 billion cash assistance.

Besides Mneimneh's reshuffle, no significant changes were recorded during the first part of the session related to the constitutional obligation to elect members of the Parliament bureau and different members of various committees, which takes place in the October parliamentary session of each year.

Baabda's MP Hadi Abou el-Hosn (Progressive Socialist Party, Mount Lebanon III) was reelected to one of the two posts of secretary of Parliament, with 85 votes. His contender was Forces of Change MP Mark Daou (Mount Lebanon IV) who earned 30 votes. Baabda's FPM MP Alain Aoun was reelected by acclamation to the second position of secretary.

As for the members of the bureau of the House, Greek-Catholic MP Michel Moussa (Amal, South Lebanon II) was reelected by acclamation, as was his colleague Abdul Karim Kabbara, an MP from Tripoli, North II, linked to the Future Movement. For the third vacant position, an election was held and Hagop Pakradounian (Tachnag, Mount Lebanon II), who was already a member of the board since May 31, 2022, won with 85 votes against Forces of Change MP Paula Yacoubian, (Beirut-I), who received 23 votes. Seven blank votes were cast.

During the session, Parliament Speaker Nabih Berri accused the Forces of Change MPs of "breaking the agreement" by calling for elections for the parliamentary committees instead of agreeing on the names beforehand, Berri's office reported.

Reacting to this statement, Forces of Change MP Mark Daou told L'Orient Today that the bloc was negotiating with Berri before the session about the names that would be appointed to the committees, "However, he (Berri) wanted to give us one MP in each committee while giving other blocs their normal representation," which the group refused.

In a tweet, Sami Gemayel (Kataeb, Mount Lebanon II) criticized "unacceptable prior agreements made for the formation of the committees." These agreements "between major groups exclude MPs who could work in the committees within their actual field of expertise."

It approved a $150 million loan from the World Bank to finance wheat imports. Parliament had previously approved the loan in July, but it was sent back due to technical details.

At the time, Salam expressed his satisfaction with the agreement, highlighting the fact that it would allow Lebanon to ensure its wheat needs for "nine months."

Parliament is also set to discuss a law on banking secrecy. The law was approved back in June but was sent back to Parliament by President Aoun to make certain modifications to the time period to which it applies, “so that it covers at least the period during which the [current economic] crisis was caused.”

The IMF had criticized the approved version of the banking secrecy law which is one of the key demands the international organization requires in order to unlock financial assistance. If Parliament approves the law today, it will take effect even if Aoun refuses to sign it.