Thursday’s meeting between the head of the Progressive Socialist Party Walid Joumblatt and two Hezbollah representatives has reshuffled the cards. 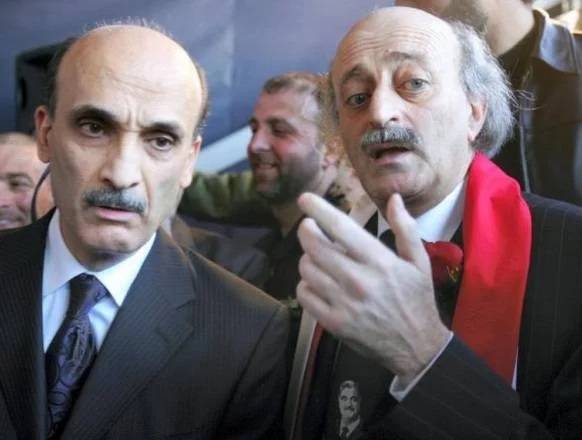 If there is a political figure in Lebanon who risks paying the price of the rapprochement with Hezbollah initiated by Walid Joumblatt, it is Samir Geagea.

The leader of the Lebanese Forces, the top opponent of Hezbollah and its camp, will now have to fight the presidential battle without the Progressive Socialist Party’s parliamentary bloc’s eight MPs.

The Druze leader’s repositioning to the center will certainly torpedo the efforts recently made by the LF leader to gather a diverse opposition under his leadership and to encourage it to agree on a candidate with which to confront Hezbollah, or else to block the election of a president aligned with the March 8 camp by preventing a quorum.

Has the opposition camp lost Joumblatt? The answer is all the more complex as the game is far from being over and the opposition, in its global sense, is at this stage still divided despite the timid attempts to unify its ranks.

One thing is certain: the Druze leader’s repositioning to the center will inevitably split an already shaky camp, of which several components are reluctant to join the LF in its battle.

The leader of the PSP has not hidden his deep differences with the LF head lately. “He has his policy and I have mine …. The LF are one thing, and the forces of change are another thing,” Joumblatt told Jordan’s al-Mamlaka channel on Monday.

By reaching out to Hezbollah, with which he continues to have major differences, especially at the strategic level, the Druze leader has not only anticipated the geopolitical shifts that are in the making — regardless of whether or not they are beneficial for Lebanon — but he has also managed to take up the reins of the game on the domestic scene.

Considered a true high-wire walker, the PSP leader knows that the ongoing polarization of Hezbollah and the LF does not work well, and that a repositioning to the center is more than necessary today to get the country back on track.

Recently, the PSP head made many remarks reminding his listeners of what he deems priorities at the current phase, namely economic recovery and reforms required for an agreement with the International Monetary Fund, which are much more pressing in his eyes than the major strategic issues, including Hezbollah’s weapons.

“Walid Joumblatt is against the idea of a repolarization of the domestic scene. He mainly does not want to join a camp opposed to Hezbollah under the leadership of Samir Geagea,” said Michael Young, the editor of Diwan and a senior editor at the Carnegie Middle East Center.

Many observers agree that the PSP leader is not trying to make a 180-degree turnaround, but rather is trying to reorient his political priorities toward a consensual formula that the majority of the actors, including the opposition camp, can rally behind.

A source close to the meeting held Thursday in Clemenceau indicated that Joumblatt and the two Hezbollah officials (Hussein Khalil and Wafiq Safa, the head of Hezbollah’s coordination committee) spoke in detail about the candidates for the presidency who are considered too politically biased.

One can deduce that those candidates include both Geagea and the head of the Free Patriotic Movement Gebran Bassil — two names that were reportedly discounted — among others.

“Walid Joumblatt believes that the presidency must be the outcome of a national consensus. At the same time, he wants to have a policy that is independent of all groups,” Young added.

Pulling the rug from under Geagea’s feet

While the Druze leader took a step closer to Hezbollah, whose decision is unavoidable in the presidential elections, he hopes to attract the anti-Hezbollah camp’s components, thus seeking to pull the rug from under the feet of Geagea, whose ambition is precisely to pose as the leader of the opposition.

“If the new [parliamentary] majority and the uprising forces manage to unite their ranks, we could define [together] a political and economic program. But if some people want to consider themselves as the guardians of the presidential election, then the victory of the moumanaa axis, which is unified and cohesive, will be firmly established,” Joumblatt warned on Monday.

It is a loud and clear message that Joumblatt sent to Geagea. It also represents an unequivocal call to some of the opposition components and protest movement MPs to join his centrist line. Furthermore, it is a way of saying that a repositioning to the center does not mean that he has completely abandoned the sovereignist camp.

The fact that he sent his son, Taymour, to the Maronite Patriarch Bechara al-Rai on Friday is in itself a sign pointing at the sovereignist constant principles of the Moukhtara leader.

“While he is driven by a desire not to be left behind by possible geopolitical changes …, he is not someone who will burn the bridges,” said political analyst Karim Bitar.

It is on Joumblatt’s strategic fundamentals that the LF is counting to minimize the importance of the meeting in Clemenceau.

“We cannot say that Walid Joumblatt has switched from one camp to the other. Strategically, he is still in his place,” said LF spokesman Charles Jabbour, who believes that there is nothing new in the meeting with regard to the form, stating that the Druze leader has been meeting more or less irregularly with Hezbollah since the May 11, 2008 event, in reference to the serious clashes that had pitted Druze against Shiite in Choueifat.

For all that, the LF refuses to support the idea that the PSP-Hezbollah rapprochement will inevitably come at the expense of the opposition, and more precisely of the LF, which risks being isolated.

“One certainly can’t say that about a party that has the biggest representation on the Christian scene and a bloc of this size and that adopts a cross-sectarian discourse,” Jabbour said.

If there is a political figure in Lebanon who risks paying the price of the rapprochement with Hezbollah initiated by Walid Joumblatt, it is Samir Geagea.The leader of the Lebanese Forces, the top opponent of Hezbollah and its camp, will now have to fight the presidential battle without the Progressive Socialist Party’s parliamentary bloc’s eight MPs.The Druze leader’s repositioning to the...