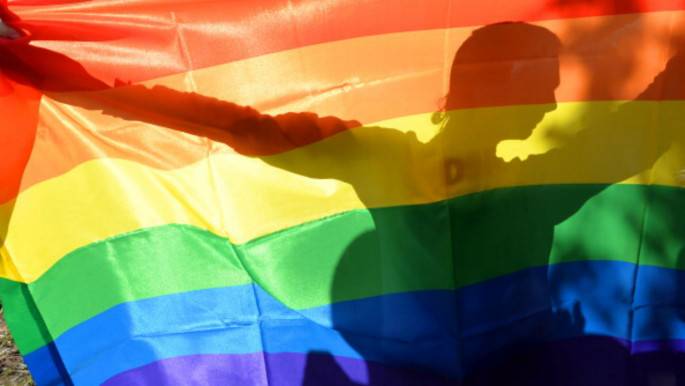 I am often asked: “How is it like living in an LGBTQ+ friendly MENA country?” My response is usually snarky. The truth is queer people in Lebanon are living on bought time, waking up to the constant threat of erasure. Lesbian, gay, bisexual, trans, gender non-conforming, and queer persons in the country are well aware that powers of hegemony, including national authorities, regressive religious institutions, and conservative social groups, are coming for both their feet and their hearts.

Often, I find myself lapsing into a sickening nostalgia trap, one that takes me back to an era overshadowed by emancipation and resistance. The October 17 intifada: from chants for queer liberation to what felt like a recuperation of public spaces of galactic standards.

But the chants have gone mute and spaces have turned motionless as the country simmered in silence.

I say this and I recall how close we were to reclaiming ownership over the queer identity. There was a real, palpable possibility to create a system that celebrates the queers, all of the queers: the femme, the masc, the raging and the revolutionaries, the discreet, and everyone in between.

Today, LGBTQ+ persons have been thrown into a deadly abyss left to face the aftermath of crippling economic, financial, and health crises. To top it all off, many were also violated in the privacy of their own homes and were rid from any sense of safety and stability following the deadly Beirut Blast.

The fact of the matter is that the queer project in Lebanon is after a system that is designed to erase every non-straight body in the public space. A silent killer. Authorities took it upon themselves to wage a psychosocial war against the country’s queer community. Last week, caretaker Minister of Interior Bassam Mawlawi, forwarded a letter asking security forces to take urgent measures to halt any social gatherings seeking to “promote homosexuality.”

Officials’ response could not get any louder.

Shortly after the release of MoIM’s directive, Haven For Artists, a cultural inclusive feminist organization working at the intersection of art and activism, had to cancel all events in celebration of pride month. This took place in sync with an organized attack, spearheaded by groups hiding under a religious cloak, on queer-friendly establishments over social media such as Facebook and WhatsApp.

The Lebanese state, backed by key religious authorities, has made it a point to crackdown on anyone who dares stray from their patriarchal herd. Indeed, queer people have quickly become the subject of political scapegoating, acutely so since the onset of the crisis.

All of this is happening at a time when the patriarchal system in Lebanon is reinventing its legitimacy by further making minority groups more vulnerable, especially queer people. And when we say queer people, we must acknowledge that one’s sexual identity exists with other identities, like nationality, gender, race, class, and ability, which in turn situates different queer people in different positions of vulnerability.

How can we forget Suzy, transgender activist and trailblazer, who left us almost three years ago after enduring what amounts to a lifetime of ostracization and exploitation? The story of Suzy is one of many other trans and gender non-conforming individuals who continue to resist and organize under a system that commercializes their bodies, exploits their labor, and trivializes their social and economic identities.

A study mapping policy stances of 16 opposition groups in Lebanon (prior to elections) illustrates an above-average support for LGBTQ+ rights (including right to parenting).

The country’s alternative parliamentary bloc came once again in the public eye today. Following the ministry’s heterosexist directive, none of the elected opposition MPs proposed an action plan or expressed willingness to restore the queer community’s sense of safety, including ensuring access to their social and economic rights alongside the right to assembly.

The thirteen newly elected parliamentarians had put forth a concrete, progressive socioeconomic agenda, positioning themselves as a bloc of the working class. But to everyone’s surprise, only a handful of them issued public statements that were limited to an expression of dissatisfaction towards the ministry’s actions.

Public solidarity as such is surely welcomed. The queer project is being, for the first time, brought up in the policy space. But I would push this a bit more and say that adding “LGBTQ+ rights” and stirring will not suffice this time around.

A response of this tone comes no way near addressing the growing threat of physical and psychological violence being imposed on the LGBTQ+ community in Lebanon. The directive, while petrifying, had offered a real opportunity for alternative MPs to unify their stance and come up with concrete steps forward for the protection of LGBTQ+ persons.

The cost of such policy inaction is the continued violation of LGBTQ+ lives in crisis-torn Lebanon. Faced with violent threats and mounting security concerns, Helem, the first LGBTQ+ rights organization in the Arab world, alongside other activist groups, had to call off a protest responding to MoIM’s daunting decree.

A few “alternative” MPs have even expressed strong views against the LGBTQ+ community in Lebanon, well before the ministry’s directive. Waddah Sadek, one of the newly elected parliamentarians, expressed his willingness to legislate against the inclusion of LGBTQ+ groups in society, when asked about same-sex marriage. He also added that queer people in Lebanon currently enjoy a wide array of rights such as running for Parliament. Unfortunately, history seems to be repeating itself. Lebanon’s queer community is, yet again, becoming the subject of performative solidarity.

Government and religious authorities, helped by complicit media and centrist “alternative” politics, are on an “urgent” mission to bury what remains of Lebanon’s queer community. But how these acts of violence are coming at a time of unabated social collapse is mind-bending.

Could it be that the “halt” of homosexuality and queer assembly is only part of a broader scheme to restore the banking sector’s financial losses worth of $70 billion? Might the erasure of queer persons from the public sphere help facilitate a clear, independent investigation into the August 4 explosion that killed more than 200 people and displaced over 300,000?

Hussein Cheaito is a Development Economist at The Policy Initiative & Non-resident Fellow at The Tahrir Institute for Middle East Policy.

I am often asked: “How is it like living in an LGBTQ+ friendly MENA country?” My response is usually snarky. The truth is queer people in Lebanon are living on bought time, waking up to the constant threat of erasure. Lesbian, gay, bisexual, trans, gender non-conforming, and queer persons in the country are well aware that powers of hegemony, including national authorities, regressive...