For Mikati, things are getting complicated

While the current caretaker prime minister was considered the most likely candidate to lead the next cabinet, the circle of MPs opposing this option seems to be widening. 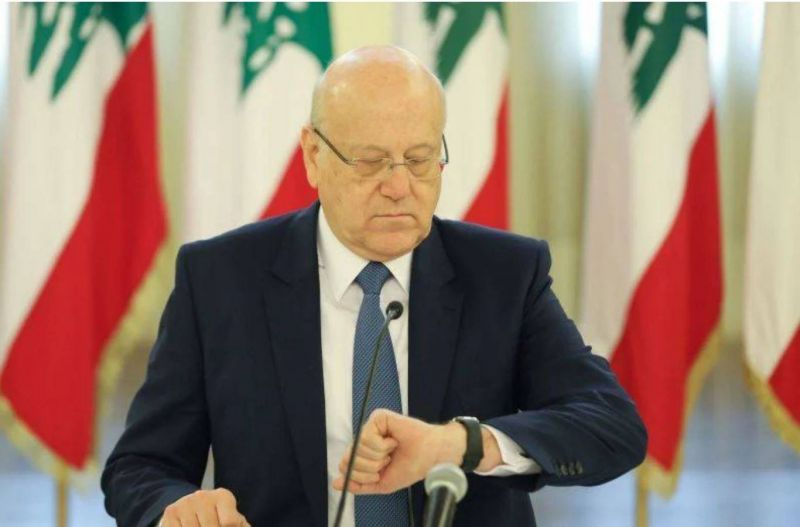 “Things are a little more complicated than you think.”

It is with these remarks that an MP within the former March 14 camp summarized to L’Orient-Le Jour the ongoing negotiations to designate a new prime minister.

This is because, with only three days ahead of Thursday’s binding parliamentary consultations in Baabda, ambiguity continues to prevail over the final choices of the various protagonists, while the range of potential candidates to lead the next cabinet is beginning to widen.

Since the beginning of parliamentary term resulting from May’s elections, caretaker Prime Minister Najib Mikati has been considered the most likely candidate to lead the next cabinet, particularly since he has the support of Amal and Hezbollah and some independent MPs.

However, several developments that took place yesterday could make it difficult for the Tripolitan billionaire to easily return to the Serail.

Caretaker Economy Minister Amin Salam announced on Sunday evening his candidacy for the prime minister’s post. Above all, the Taqaddom party, which is part of the protest movement, made waves in a statement published yesterday supporting Nawaf Salam, former Lebanese ambassador to the United Nations and current judge at the International Court of Justice, for the position.

“This step could well facilitate the task of the opponents who are currently trying to rally behind a candidate against Najib Mikati,” said an MP involved in the contacts underway between several parties that are unambiguously against Mikati remaining in his post.

He thus suggested that the name of Nawaf Salam, already mentioned in 2019 for the post of prime minister, has the approval of several figures who claim to be part of the opposition. The Lebanese Forces, the Kataeb, the Progressive Socialist Party and independent MPs including Neemat Frem and Michel Moawad, MPs for Kesrouan and Zgharta respectively, are also part of the discussions.

The latter seek to get their stories straight in order to avoid a defeat similar to the one suffered in the election of the deputy parliament speaker; a battle won by Elias Bou Saab (Free Patriotic Movement/Metn), supported by the ruling forces, against Ghassan Skaff (independent/Western Bekaa-Rashaya), supported by most of the opposition and protest movement MPs. The latter are divided over the next head of government, as they remain far from a unanimous decision on Nawaf Salam’s nomination, at least for the moment.

Meanwhile, the traditional parties do not seem ready to make concessions on some points, even if they signal that they are in favor of the thawra MPs’ choices.

“It is true that we are engaging in ongoing contacts, out of the spotlight, in order to confront the FPM and Hezbollah, but this does not mean that we will support any candidate. This is because the future prime minister must meet the criteria we have already defined, namely to fight for Lebanon’s sovereignty and its economic recovery,” Fadi Karam, MP for the LF in Koura, told L’Orient-Le Jour.

He ruled out the possibility that his party will take part in a national unity cabinet in the traditional sense of the word, i.e. a cabinet that includes representatives of all political parties, including Hezbollah, the main local opponent of Samir Geagea and his party.

On Sunday, Maronite Patriarch Bechara al-Rai spoke on the issue of representation in the cabinet. For the first time since the 2019 uprising, the prelate did not advocate for a government of independent technocrats, but rather for a “nationally representative” cabinet.

These remarks appear to reflect the desire of the head of the Maronite Church to prevent the formation of a ministerial team where the FPM would monopolize the representation of Christians.

This position comes at a time when the government could be required to run the country in the event of a presidential vacuum after Michel Aoun’s six-year term ends on Oct. 31.

This explains the fact that FPM leader Gebran Bassil imposed conditions on the future prime minister very early on. On the day following the parliamentary election he started by rejecting the option of a team of technocrats. A little bit later, and at a time when his long-time ally, Hezbollah, was making efforts to bring Mikati back to the serail, Bassil made it clear that he is against this possibility.

Yesterday, Simon Abi Ramia, MP for Jbeil from the FPM, surprised everyone when he said on radio that this position “could change as a result of some developments.” Is the FPM willing to back down from its position in order to facilitate the ministerial process? Abi Ramia does not seem to share such a reading.

“Our conditions are clear: the prime minister must commit to implementing of reforms, including the forensic audit, dismissing (central bank governor) Riad Salameh from his post and facilitating the continuation of the investigation into the Beirut port explosion,” he said, indicating that Mikati has not yet made a clear statement on these points. “If he agrees to meet these conditions, we may change our minds,” said the MP for Jbeil.

But Rindala Jabbour, spokesperson for the FPM, gave another explanation. “We do not want to vote for Mikati. We are waiting for the opposition forces and the protest movement to agree on a candidate to decide to support him. Otherwise, we will opt for a blank vote,” she told L’Orient-Le Jour.

She indicated that her party “is in contact with several parties opposing the designation of the caretaker prime minister [Mikati], as well as with the protest movement’s MPs.”

This information has not been confirmed by the concerned parties. In the eyes of many observers, the FPM’s move would seem to kill two birds with one stone: firstly, it would toss the ball of the prime minister’s designation into the court of its opponents, thus washing its hands of any delay in reaching an agreement on a candidate. Secondly, it would tarnish the image of the protest movement’s MPs, which have already been shaken by the defeat suffered in the election of the deputy parliament speaker.

For its part, Saudi Arabia seems to be closely following government-related developments. It is in this context that a series of visits by Sunni political figures to Saudi Arabia's Ambassador to Lebanon, Walid Bukhari, have been made.

Yesterday, Bukhari met with Mohamed Nabil Badr, independent MP for Beirut, and Walid Baarini (former Future Movement/Akkar). The latter told L’Orient-Le Jour that what matters most to Riyadh is to form a cabinet quickly and to clearly include Lebanon’s neutrality with regards to regional conflicts in the ministerial declaration.

“Things are a little more complicated than you think.”
It is with these remarks that an MP within the former March 14 camp summarized to L’Orient-Le Jour the ongoing negotiations to designate a new prime minister.
This is because, with only three days ahead of Thursday’s binding parliamentary consultations in Baabda, ambiguity continues to prevail over the final choices of the various...