Once again, Joumblatt is facing a balancing act

The Progressive Socialist Party’s parliamentary bloc has not decided yet on its nominee for the post of prime minister, pending the outcome of its contacts with opposition and independent MPs. 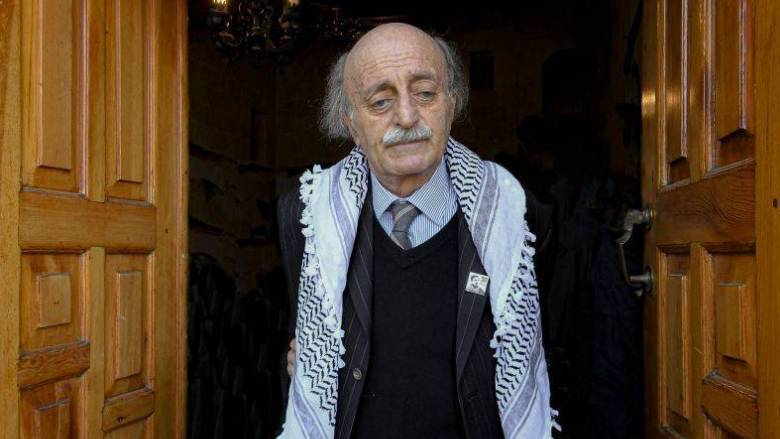 What will Walid Jpumblatt’s MPs do on Thursday in Baabda? This question seems to be on everyone’s lips, a few days before Thursday’s parliamentary consultations to designate a new prime minister.

This is particularly the case since the main elections after May’s parliamentary ballot, including the election of Parliament speaker, have shown that the eight MPs of the PSP parliamentary bloc are capable of tipping the scales in favor of one camp or another.

Joumblatt, a key figure in the traditional political class, came out as a winner in the tough fought electoral battle that he had described as a “political assassination at the ballot box” and an “attack” by the Hezbollah-led resistance camp.

Following the vote, the PSP leader managed to have the overwhelming majority of his MPs re-elected for a new term. Joumblatt mainly managed to defeat his main rivals on the Druze scene: his long-time rival Talal Arslan, and Wiam Wahhab, both aligned with Syria.

While Marwan Hamadeh won the battle against his competitor Wahhab in the Chouf district, the great surprise was that Mark Daou won the Druze seat in Aley over Arslan. The protest movement candidate garnered 11,656 preferential votes vs. 9,008 votes for the Lebanese Democratic Party’s leader.

This outcome is partially explained by the fact that the Mount Lebanon IV constituency, Joumblatt’s undisputed stronghold, was the only district where the thawra forces had unified their ranks.

However, information obtained by L’Orient-Le Jour indicates that the victory of Daou, Halima Kaakour and Najat Aoun in the Chouf district was made possible by a contribution of votes from the PSP.

“There was no decision to give votes to the protest movement by the PSP board. But it is normal for the supporters angry with the traditional political class to opt for the new figures,” said a PSP MP who declined to be named.

To be clear: In Joumblatt’s eyes, the protest movement was the lesser evil compared with his pro-Syria rivals. “Walid Joumblatt’s main objective was to firmly establish his leadership on the Druze scene and get rid of his competitors, at least at the institutional level. And he won this bet,” political analyst Karim Mufti told L’Orient-Le Jour.

“J0umblatt has made it easier for his son Taymour by removing these Druze figures from the scene. But the confrontation is far from ending in the near future,” he said, recalling that Arslan and Wahhab are still present on the scene, with their heavy-weight ally, Hezbollah.

The PSP parliamentary bloc contributed to the re-election of Nabih Berri as parliament speaker with 65 votes, despite the opposition of several parties. The eight MP’s votes for the Amal movement’s leader were not surprising. Berri, although an old-time partner of the pro-Hezbollah camp, is a long-time ally of the Moukhtara leader.

During the election of a deputy speaker of parliament, however, the PSP and other affiliated MPs voted for Ghassan Skaff, the opposition forces-backed MP for the western Bekaa, who lost the battle against Elias Bou Saab, a candidate supported by the Amal and Hezbollah, and subsequently by Amal leader Nabih Berri and the Free Patriotic Movement.

It is from this “political illegibility,” as Mufti said, that the importance of the decision that Joumblatt’s eight MPs will take during Thursday’s binding consultations in Baabda. While caretaker Prime Minister Najib Mikati is considered the most likely candidate to lead the next cabinet, the PSP has not yet said its last word.

“We do not feel that there is a will to form a cabinet before the end of the presidential term [end of October],” said a figure close to Moukhtara. “The current caretaker prime minister has not succeeded in any of the tasks [with which] he was entrusted,” he added, thereby implying that Joumblatt’s bloc could leave Mikati without its support, similar to the Lebanese Forces and the FPM.

According to information obtained by L’Orient-Le Jour, the PSP has decided not to designate the Tripoli billionaire, but the official party line is that the jury is still out on the matter. “We have not yet decided,” said Faysal Sayegh, Beirut MP linked to Joumblatt. “We will meet on Wednesday evening to make a decision,” he said, adding that the PSP is currently focusing on “the characteristics of the head of government.”

At the end of Friday’s meeting of Joumblatt’s parliamentary bloc, chaired by the PSP head, the MPs called for the formation of a cabinet “as soon as possible.”

Lingering over the cabinet lineup, the bloc denounced “the policy of monopolizing” the ministries by some political parties, while according to sources quoted by our columnist Mounir Rabih, the Aounists have already claimed, once again, the ministries of foreign affairs and energy.

The bloc reiterated its “rejection of any attempt to return to the so-called heresy of a blocking third.”

The party holding this guaranteeing third can paralyze the executive power by having its ministers resigned — a criticism leveled at the Aounist movement which has long been accused of seeking to hold this minority in previous cabinets.

In the wait for Wednesday’s meeting, the PSP carries on with its contacts with independent MPs and opposition parties. In addition to a new meeting bringing together Wael Abu Faour and Akram Chehayeb, MPs for Rashaya and Aley respectively, with the Lebanese Forces Leader Samir Geagea, Walid Joumblatt is scheduled to meet in the coming days with former Prime Minister Fouad Siniora, a fierce opponent of Hezbollah, who is trying to fill the void left behind by Saad Hariri on the Sunni scene, informed sources told L’Orient-Le Jour.

What will Walid Jpumblatt’s MPs do on Thursday in Baabda? This question seems to be on everyone’s lips, a few days before Thursday’s parliamentary consultations to designate a new prime minister.This is particularly the case since the main elections after May’s parliamentary ballot, including the election of Parliament speaker, have shown that the eight MPs of the PSP parliamentary bloc...