In front of Hochstein, Lebanon expressed its official unified position

President Michel Aoun passed on a new proposal to the US mediator: stretching line 23 to include the whole Qana field. 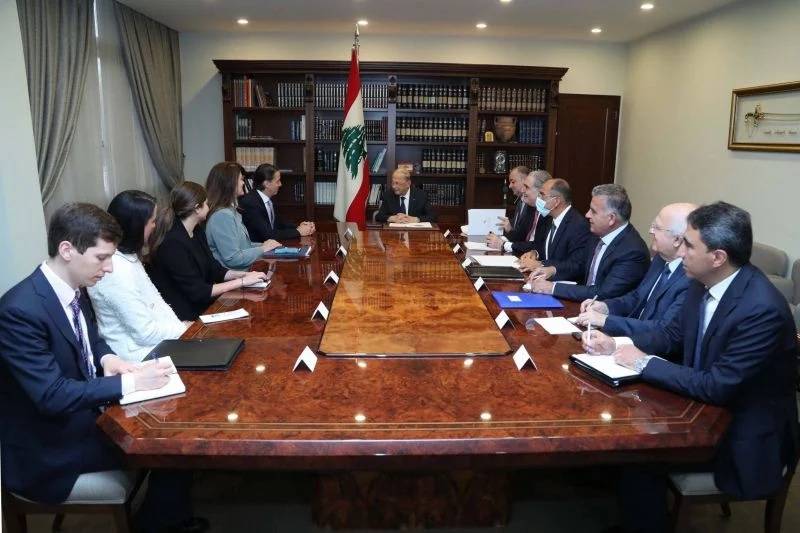 US envoy Amos Hochstein and President Michel Aoun discussed, in the presence of US and Lebanese delegations, the delimitation of the maritime border between Lebanon and Israel, on Tuesday in Baabda. (Credit: Dalati and Nohra)

It was a visit driven by the desire to reach a solution as quickly as possible and to ease the tension caused by recent developments in the Lebanese-Israeli maritime border file. Invited to visit Beirut after the arrival of an Israel-deployed floating gas production unit 10 days ago in an offshore area that could be disputed by Lebanon, the US mediator Amos Hochstein arrived in Beirut after a few days of suspense over whether or not he would come.

According to several observers, this may be the final chance to reach an agreement to resume the negotiation process.

Talks between Lebanon and Israel started based on official Lebanese claims before the United Nations in 2011, in reference to Decree No 6433/2011 on an area of 860 km2 delimiting what has been called line 23.

They were then suspended in May 2021 when the Lebanese negotiators announced their willingness to claim an additional right to 1,430 km2 delineated by line 29, which divides the Karish gas field in two, which, according to Israel, is within its exclusive economic zone as recognized by the UN. But to be formalized, this claim requires amending Decree 6433/2011, which Lebanon has never done.

Hochstein conducted his meetings over two days against a backdrop of tension caused by the arrival of the Israeli ship and subsequent military threats by Hezbollah and the Israeli state.

The fear that an escalation of the situation would torpedo all efforts was among the concerns that the US mediator expressed at a dinner hosted Monday night by the Deputy Parliament Speaker Elias Bou Saab.

During the meeting, Hochstein expressed his willingness to help “contain the conflict,” according to information obtained by our political columnist Mounir Rabih.

His second goal was to obtain a unified position from the Lebanese side that would allow the speeding up of the process, as Israel is about to start drilling in the Karish field. In the eyes of the US mediator, the clock is ticking, particularly since Israel — which is currently holding negotiations over the sale of its gas to the European Union — is working to settle the file as soon as possible.

Amos Hochstein, a senior adviser to the State Department on geopolitical energy security and US national security issues, and in charge of several files around the world, has also apparently grown impatient with the Lebanese authorities’ procrastination. “Amos Hochstein has other things to worry about,” a Western diplomat told L’Orient-Le Jour.

The three poles of power — the president, the caretaker prime minister and the Parliament Speaker — that the mediator met yesterday in the end expressed a unified stance. It was President Michel Aoun who set the tone in the morning and submitted the Lebanese proposal to his interlocutor.

This reply, expected since late March, was finally transmitted verbally by the president during a meeting in which the head of General Security, Abbas Ibrahim, and Bou Saab, took part, in addition to Aoun’s advisor Salim Jreissati.

According to sources close to the file, Lebanon has claimed the right to the entire Qana field, 80 percent of which is in block 9, north of line 23, and the remaining 20 percent south of that line. The Lebanese claim, however, was made on the basis of a straight line, not a sinuous one.

In light of the Israeli response to this offer, Lebanon will then negotiate other outstanding issues. “We proposed to expand the maritime area [belonging to Lebanon] from 860 km2 to about 1,200 km2,” including the Qana gas field, a Lebanese official familiar with the discussions told AFP.

According to him, this new offer excludes the Karish gas field. “We have been demanding the entire Qana field since the beginning, which means that line 23 will have to be amended,” he added.

In an interview with al-Hurra TV, Hochstein praised the unanimity shown by Lebanese officials in submitting their offer, as well as the “serious efforts” undertaken in the run-up to his visit, stressing the importance of reaching an agreement.

“Lebanon presented some ideas that serve as a basis to continue negotiations and take it a step forward,” he said. He also said that he understood from the Lebanese leadership that “resolving the maritime dispute is an important step to resolving the economic crisis in the country.”

“I will share the ideas put forward by Lebanon with Israel. As soon as I get an answer, I will pass it on to the Lebanese government,” Hochstein said.

During their meeting, Aoun asked the US mediator to require that the Israeli side suspend all works in the Karish field. Hochstein responded to this request by stating that the ship is outside the presumed disputed area. He also pointed out that, according to information obtained from the Israeli state, the latter has no intention of going beyond this limit.

Aoun told his interlocutor that Lebanon “values its sovereign rights over its waters and natural resources,” according to the presidency’s Twitter account. He gave him a “verbal” response to his offer which was “made several months ago” on the delimitation of the maritime border, as well as Lebanon’s official position on the matter.

Hochstein had suggested a sinuous border line that is partially along line 23 and deviates in the middle to the Hof Line, granting Israel the entire Karish field and part of block 8.

On the other hand, it gives Lebanon a significant part of the presumed hydrocarbon Qana field, and grants only a small part to Israel.

After his meeting with the president, the US diplomat was hosted at the Serail by caretaker Prime Minister Najib Mikati, for a meeting after which he did not comment to the press. Mikati told him that “it is in Lebanon’s best interest to start the drilling operations, without ceding its right to all its resources” in oil and gas.

“What is happening now violates the agreement on the one hand and denies Lebanon its rights, while it allows Israel extraction and violation, which poses a threat to peace in the region and exacerbates the danger of the situation,” said Berri during this meeting with the American official.

“The framework agreement remains the most appropriate basis and mechanism in indirect negotiations, in accordance with its texts, which call for the continuation of meetings in order to achieve the desired results,” he added.

Berri also noted that “Lebanon, which wants to extract its wealth, wants in parallel to preserve its stability.” He said that “all Lebanese agreed upon what the president shared with the US mediator regarding the maritime border and Lebanon’s rights to exploit its oil wealth.”

Shortly before arriving in Baabda, Hochstein had discussed the border dispute with the commander-in-chief of the army, Gen. Joseph Aoun, at the Defense Ministry in Yarze. In the afternoon, he met with the French ambassador Anne Grillo, who recalled on this occasion, on her Twitter account, that “it is important for the future of Lebanon and the stability of the region to find a diplomatic solution, through negotiations, to this dispute. France will spare no effort in this direction.”

Line 29 and the protest movement MPs

The Lebanese offer is not as maximalist as some civilian and military experts would like, who are calling for line 29 — which is farther south and gives Lebanon an additional 1,430 km2 — to be taken into account in negotiations with Israel.

Speaking to a delegation of MPs from the Oct. 17 uprising, who came to urge the amendment ofDecree 6433 so that line 29 would be officially claimed by Lebanon, Aoun said on Monday that Beirut “is keen to resume indirect negotiations with Israel, which stopped when the enemy refused to consider line 29 as negotiable.”

Yesterday, the protest movement MPs met with the US mediator to express their point of view.

While Hochstein was conducting all these meetings yesterday in Beirut, Israeli Prime Minister Naftali Bennett did not fail to react.

“It’s a shame Lebanon's leaders, rather than extracting the gas for the benefit of its people, are busy with internal and external fights,” he said. “I suggest that the Lebanese government seize this opportunity to improve the country’s economy and build a better future for the Lebanese people,” he added.

It was a visit driven by the desire to reach a solution as quickly as possible and to ease the tension caused by recent developments in the Lebanese-Israeli maritime border file. Invited to visit Beirut after the arrival of an Israel-deployed floating gas production unit 10 days ago in an offshore area that could be disputed by Lebanon, the US mediator Amos Hochstein arrived in Beirut after a...