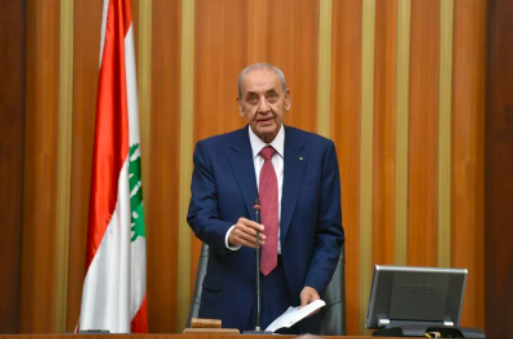 Nabih Berri being re-elected speaker of the Parliament for the sixth time on May 23, 2018. (Credit: Courtesy of Berri's press office via AFP)

If there is one point the two main Christian parties and the new MPs emerging from the protest movement agree on, it is their opposition to the re-election of Nabih Berri as Parliament speaker.

For the first time since his accession to the head of the legislature in 1992, the Amal leader risks being re-elected with a narrow majority, whereas his re-election was previously a foregone conclusion.

The Parliament that emerged from the May 15 legislative elections is expected to hold its first session next week, after the outgoing legislature’s term expires on May 21.

According to Article 44 of the constitution, the session, chaired by the oldest MP, should be devoted to the election of the speaker and deputy speaker of the chamber.

According to the same article, the head of the legislature is elected “by an absolute majority of the number of voters.”

“This means that the candidate for this position needs half plus one of the number of MPs present in Parliament at the time of the vote,” Ziyad Baroud, a legal expert and former Interior Minister, told L’Orient-Le Jour.

The text also stipulates that “in the third round of voting [if the first two rounds fail to elect a speaker], the result is calculated according to the relative majority” of voters.

“If no candidate is elected by an absolute majority [half plus one] in the first two rounds, the candidate with the most votes in the third round wins,” Baroud explained.

Theoretically speaking, all members of Parliament should meet for the first session.

The future speaker therefore needs 65 votes out of 128 to take up the post. And this is where things get complicated for Berri.

It is true that he is almost certain to keep his position, especially because the May 15 vote produced a legislature Amal and Hezbollah monopolized by Shiite representation (26 MPs affiliated to the respective blocs of the two parties, in addition to independent MP Jamil Sayyed).

In such a lineup, Berri could count on the votes of MPs affiliated with the two Shiite parties as well as those of the seven Sunnis aligned with Hezbollah.

This is a chessboard on which are found the two Marada MPs, Tony Frangieh (Zgharta) and Melhem Tawk (Bsharri), their ally from Kesrouan, Farid al-Khazen, as well as the three Tashnag MPs and Michel Elias Murr, the new MP for Metn.

To complete the picture and guarantee an easy return to the head of Parliament, Berri needs the support of the majority Christian parties, namely Samir Geagea’s Lebanese Forces or Gebran Bassil’s Free Patriotic Movement.

But the two rivals had already set the tone during the election campaign.

This position was reiterated yesterday by Ghayath Yazbeck, MP elected from Batroun, and his colleague from Jezzine, Ghada Ayoub.

“In principle, we stand our ground. But no decision has yet been taken,” said an LF official.

Geagea said after a meeting with the newly elected LF members of Parliament on Thursday that he would not vote for Berri for another term in the speaker’s chair.

Ambiguity also surrounds the FPM decision, which, despite its strained relations with Berri, President Michel Aoun’s longtime nemesis, did not fail to ally with the Amal movement during the legislative elections.

“No decision has been taken yet,” said Simon Abi Ramia, FPM MP for Jbeil.

Acknowledging his party’s rocky relations with Berri, Ramia appeared to raise concerns about potential institutional vacuum if a Parliament speaker is not elected.

“If Nabih Berri does not get 65 votes to be elected, it could lead the country to an institutional chaos that would jeopardize the holding of the presidential elections [scheduled for next October],” he warned, leaving the door open to a probable agreement on this issue.

This should be at the center of the speech that Bassil intends to deliver during the “victory festival” that his party is organizing on Saturday afternoon at BIEL in Beirut.

Another problem for Berri is that he will “certainly not have the support of the Kataeb,” in the words of a senior party official contacted by L’Orient-Le Jour.

“We never voted for him. And we won’t start doing so today,” the Kataeb source said.

In addition to refusal on part of the Christian parties in Parliament, the head of legislature is expected to face a similar stance from the newly elected MPs representing the thawra (revolution).

“It is settled: we are not going to vote for Berri. This is especially true since this is where the change begins,” said Waddah Sadek, an MP from the protest groups, without commenting on any alternatives who could replace Berri.

Such a scenario would place the Amal leader at odds with both the majority Christian parties and the newcomers (13 MPs) whom he has just called for dialogue in view of the next phase.

Will he agree to be reappointed under such conditions?

This question is all the more legitimate since Berri has always been careful to maintain community balance. How will he react if he loses the two main Christian parties’ cover?

Many observers believe that the Amal leader will not face such a scenario.

This explains, according to them, alleged behind-closed-doors talks of a package deal conditioning Berri’s re-election to the choice of the future deputy speaker (Greek Othrodox) affiliated to either the LF or FPM.

If there is one point the two main Christian parties and the new MPs emerging from the protest movement agree on, it is their opposition to the re-election of Nabih Berri as Parliament speaker.For the first time since his accession to the head of the legislature in 1992, the Amal leader risks being re-elected with a narrow majority, whereas his re-election was previously a foregone...