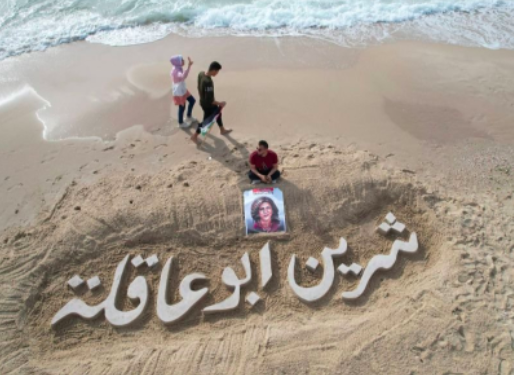 A sand sculpture in tribute to 'Shireen Abu Akleh', an al-Jazeera journalist killed in an Israeli raid in the occupied West Bank, on a beach in Gaza City on May 11, 2022. (Credit: Mohammad Salem/Reuters)

She was shot in the face while doing her job. She was Palestinian and a reporter, and she worked hard to be a voice of her people in front of the world at a time when the world chose repeatedly to see nothing.

Her death announcement Wednesday morning was a reminder of the threat to journalists in the region, the Palestinian tragedy’s persistence and its importance as central cause — at least at the emotional level — from the Atlantic to the Arabian Gulf.

Shireen Abu Akleh, 51, was murdered while wearing her helmet and bulletproof vest emblazoned with the word “PRESS.” She was murdered while carrying out her mission — that of reporting — in the Jenin refugee camp, which is subject to daily raids by the occupying army as part of a so-called “anti-terrorism” operation.

Shireen, a leading figure on the Al Jazeera TV channel, was known to tens of millions of viewers. But working for a major media outlet does not provide you with protection. What happened to Shireen, who was Palestinian-American, was not the first time Israel has shown a complete disregard for journalists, hospitals, education centers, and religious institutions.

Almost one year ago to the day Shireen was killed, the Israeli army bombed a tower block in the Gaza strip, housing offices of Al Jazeera and the Associated Press.

Who shot Shireen Abu Akleh? And why does the Israeli state oppose an independent international investigation in her assasination?

These questions seem rhetorical. Almost all eyes are focused on Israel, especially since it has changed its side of the story several times. After trying at first to blame Palestinian snipers, it withdrew its statement before saying that the journalist was probably killed in an exchange of fire, without specifying which side killed her.

Yet, despite the outrageous statements, none of its allies in the Western world seems ready to hold Israel accountable.

Spokesman for the US State Department Ned Price condemned in a tweet the death of Abu Akleh and invoked general principles related to the freedom of the press. That is all. He did not mention Israel.

It is as if the circumstances surrounding her assassination had simply been emptied of their political substance, although the journalist was also an American citizen.

In contrast, Price was quick to denounce the murder in Ukraine of American filmmaker Brent Renaud in March as a “gruesome example of the Kremlin's indiscriminate actions,” in reference to Moscow’s invasion of Ukraine on Feb. 24.

This restraint confirms one thing: After more than half a century of occupation, settlement building and property seizure — in the eyes of the US and Europe, Israel remains a state that honors the rule of law and the “only democracy in the Middle East” that is dear to them.

Even if Israel’s responsibility for Abu Akleh’s assassination was officially recognized as such, it would be perceived as accidental and with no links to the Israeli system.

In the Palestinian context, however, it was a relatively ordinary assassination of a woman who was not [ordinary], and who was killed on the same day as Thaer Maslat, 16 — the 10th child to be killed by Israeli forces this year — and the day after a Palestinian family’s home in East Jerusalem was destroyed, leaving 35 people homeless.

Israel is furthermore accustomed to perpetrating attacks on press freedom. In April 2018, two Palestinian journalists covering the Great March of Return in the Gaza Strip were killed by the Israeli state: Ahmad Abu Hussein of Sawt al-Shaab radio and Yasser Mourtaja, the founder of the independent Ain Media agency.

More generally, it can boast a track record of repression, to say the least. According to research by author and academic Stephanie Latte Abdallah, nearly 40 percent of men in the West Bank and Gaza Strip were detained at least once from 1967 to date.

From the Maghreb to the Mashreq, Abu Akleh’s death triggered strong emotions. A rush of anger and sorrow went viral on social media, reminding the world that Israel will never be perceived as a “normal” state by its neighbors as long as the occupation and colonialism continue. This is despite all the steps to normalize ties that were taken in recent years.

As long as the West, starting with Washington — as the only international actor capable of influencing Israeli policy — continues to defend its ally unconditionally, or to wallow in cowardly discourses that equate the violence of the occupier with that of the occupied, invoking “human rights” in other cases will always be met with circumspection, if not hostility, by a major part of the Arab world.

This will also give all Pavlovian anti-imperialists — who are ready to follow any tyrant, as long as he flexes his muscles in front of Washington, even if it means supporting the Russian invasion in Syria or Ukraine — something to talk about.

The double standards policy — or even worse, the tendency of pitting the hardship of some against that of others — can only lead to the abyss. It dehumanizes the victims, transforming them into variables that would be adjusted for ideological comfort. It also calls into question the meaning of global solidarity in a world that needs it more than ever.

In view of the universal nature of their aspirations, Palestinians and Ukrainians have more in common than geopolitical calculations would have us believe.

If it is obvious that the invasion of Ukraine represents today a more existential threat for the West than the occupation of Palestine — even if Europe has a huge historical responsibility in the Palestinian tragedy — there is a big difference between setting priorities and being complacent, or even complicit with the Israeli colonialism.

Seeing the same people who had accused the Boycott, Divestment and Sanctions (BDS) movement of anti-Semitism today weighing the merits of boycotting Russian artists says a lot in this regard.

According to several international organizations, the Israeli regime meets the legal qualification criteria of an apartheid state. This same state is now being probed by the International Criminal Court for war crimes committed in the Palestinian territories.

Despite all of the above, nothing changes. From the banks of the River Jordan to the shores of the Mediterranean Sea, Israel exercises its control with impunity without worrying about international law.

There is nothing, absolutely nothing, that justifies the laissez-faire attitude it was granted. Freedom and justice are not divisible. If they were, they would lose their meaning.

She was shot in the face while doing her job. She was Palestinian and a reporter, and she worked hard to be a voice of her people in front of the world at a time when the world chose repeatedly to see nothing.Her death announcement Wednesday morning was a reminder of the threat to journalists in the region, the Palestinian tragedy’s persistence and its importance as central cause — at least...