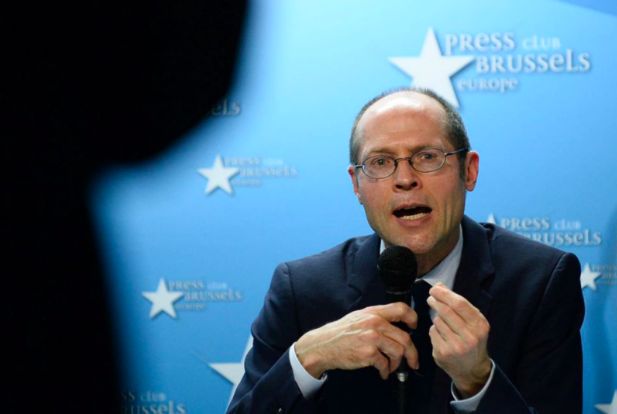 BEIRUT — The United Nations official tasked with investigating poverty around the world, in a report issued Wednesday, accused the Lebanese government and central bank of “human rights violations” for creating the conditions that led to one of the most severe economic crises in modern history.

The UN’s special rapporteur on extreme poverty and human rights, Olivier De Schutter, visited Lebanon in November and gave a scathing initial assessment at the time of the government’s track record.

In the final report made public Wednesday, De Schutter wrote, “The Lebanese State, including its Central Bank, is responsible for human rights violations, including the unnecessary immiseration of the population, that have resulted from this man-made crisis.” Today, more than 80 percent of Lebanon’s population is living in “multidimensional poverty,” according to the United Nations Economic and Social Commission for Western Asia.

Even pre-crisis, the special rapporteur noted, Lebanon was a highly unequal society with “appalling levels of wealth concentration at the top; tax policies that favor evasion and benefit the wealthy; chronically neglected public education and health-care services; an inadequate social protection system; and a failed electricity sector.”

The report accuses the government of Prime Minister Najib Mikati — formed in September after a 13-month vacuum with the country under a caretaker government — of failing to deliver on its promises and particularly for “an inability to acknowledge and fairly distribute the losses of the financial sector, which the Government has now forced the most vulnerable to shoulder.”

It also notes that “undue influence by the banking sector in the process continues to sway negotiations with the International Monetary Fund (IMF),” to the detriment of the most vulnerable in society.

The government was invited to review a draft of the report before publication and did not attempt to rebut the allegations contained in it, De Schutter noted.

The document covers a wide range of issues, including the country’s chronic electricity shortages and lack of a social safety net; the shoddy state of the country’s school system and the increasing rate of child labor; the nationality law that prevents Lebanese women from passing down citizenship to their children, thus placing barriers in the way of the children’s access to school and jobs; mistreatment of migrant workers; and the bureaucratic hurdles to Palestinian and Syrian refugees working legally.

It also points to shortcomings by international donors, noting that “the rapidly unfolding humanitarian needs of Lebanon in the last two years have led international donors to scramble aid, adopt opaque benefit distribution methods and become inefficient through overlapping programmes.”

But the report reserved much of its vitriol for the financial sector and for Banque du Liban in particular, alleging that the central bank’s “actions have brought the Lebanese State into clear contravention of its international obligations, including the obligation to guarantee an adequate standard of living to its population.”

De Schutter cited in particular BDL’s lack of transparency in financial reporting; its pre-crisis practice of offering “disproportionately high interest rates to commercial banks and wealthy depositors” to maintain an unsustainable pegged exchange rate of LL1,500 to the dollar; and its practice of allowing multiple exchange rates to flourish, which “currently represents an obstacle to negotiations with the IMF and is known to lead to corruption.”

Embattled BDL head Riad Salameh is the subject of investigations by several European countries into allegations of embezzlement and money laundering.

Among the report’s recommendations: amending the nationality law to allow women to grant citizenship to their spouses and children; granting the right to work in all professions to Syrian and Palestinian refugees; abolishing the kafala (sponsorship) system for migrant workers and adopting a new standard labor contract with strengthened rights; developing a “national social protection strategy” that “should be financed by a progressive taxation system that taxes wealth and by tackling tax evasion.”

Key among the actions needed to reduce poverty, De Schutter wrote, “Lebanon should present a credible economic and financial recovery plan where the losses of the Banque du Liban are acknowledged and shouldered by shareholders and wealthy depositors.”

BEIRUT — The United Nations official tasked with investigating poverty around the world, in a report issued Wednesday, accused the Lebanese government and central bank of “human rights violations” for creating the conditions that led to one of the most severe economic crises in modern history.The UN’s special rapporteur on extreme poverty and human rights, Olivier De Schutter, visited...