Does a recent court decision smooth the way for sectless candidates? It's complicated 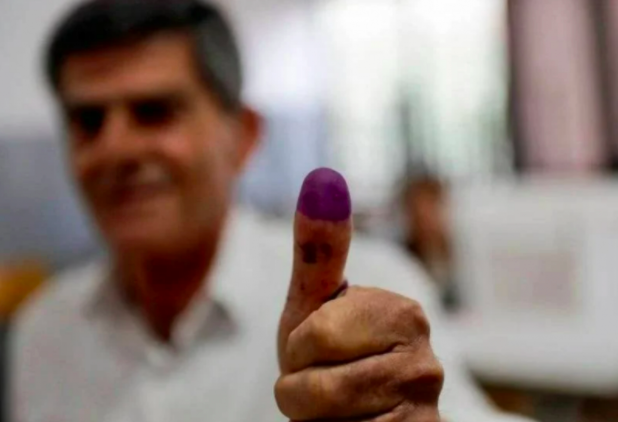 A voter shows his ink-stained thumb after voting in the last Lebanese legislative elections, in Jbeil, on May 6, 2018. (Credit: Joseph Eid/AFP)

BEIRUT — In an apparent victory for those who want sectarian considerations to be removed from politics, the State Shura Council, Lebanon’s highest administrative court, ruled last week that Lebanese who have removed their sect from their civil registry records have the right to stand in elections.

The ruling is the first of its kind, known as a “premiere,” according to former Interior Minister Ziad Baroud, who in 2009 signed the decision allowing Lebanese to remove their sect from civil registry documents. As such, it could set a precedent for future cases. But confusion persists around the political rights of people who have taken this step, and the decision may not apply to all, or even most of those who have chosen to remove their sect from their personal status records.

Mohamed Nasser, a candidate for the Shia seat in the Beirut II district, running with the opposition party Citizens in a State (MMFD), had his candidate paperwork rejected earlier this month by the Directorate of Political Affairs and Refugees in the Interior Ministry because he had removed his sect from his civil registry records in 2013. An employee of the Civil Status Directorate, which is also housed at the Interior Ministry, told him his paperwork was valid despite the removal of his sect, Nasser told L’Orient-Le Jour, but the Directorate of Political Affairs and Refugees continued to refuse his paperwork and issued a decision rejecting his candidacy on March 15.

Finally, a complaint filed by Nasser’s lawyer, Mousa Khoury, at the State Shura Council on March 18 resulted in a rebuke of the Interior Ministry’s rejection of his candidacy. The court found that “the right to run for elections is one of the basic rights of every citizen and one of the public freedoms that the constitution protects” and that the removal of one’s sect from personal status records is not among the listed reasons for ineligibility given in the electoral law.

However, the decision seemed to hinge on the fact that Nasser still technically had a sect and was not, therefore, really sect-less despite having removed it from his personal status record. Nasser provided a certificate from the Jaafari Dar al Ifta, the religious authority for Shiites, affirming his belonging as a Shiite Muslim alongside his candidacy paperwork.

The Shura Council decision recognized the sectarian nature of Lebanon’s parliamentary system, saying that the documents submitted by candidates “must clearly indicate the sect on which the nomination is based” and holding that the validity of Nasser’s candidacy was based on his presentation of a sectarian credential in the form of the Jaafari Dar al Ifta certificate. It remains unclear, in other words, whether someone who could not or refused to acquire such a certificate of membership in a religious community would have been considered eligible.

A statement from Nasser’s political party, MMFD, an alternative party founded in 2016, hailed the decision, saying it “comes to ensure that the choice to remove the sect from papers should not prevent any citizen from exercising their rights.” The party added that it respected Nasser’s choice, affirming that “belonging to a sect is a personal choice and not a condition for citizenship.”

When reached for comment Faten Younes, head of the Interior Ministry’s Directorate of Political Affairs and Refugees, called the matter “a very thorny issue” that few understand, deferring to the information contained in the Shura Council decision.

The council's decision may be the first of its kind, but the circular it is based on has been in force since 2009. It stipulates that the choice to remove the sect from personal status records does not prevent any citizen from exercising their political rights, including the right to run for office.

It was issued by the Interior Minister at the time, Baroud, “because people have the right to keep this information private,” he said, as there is no law that “dictates the necessity of showing your religion on your official documents.”

“It didn’t require a new law. It was only a circular that is based directly on the Lebanese constitution,” Baroud told L’Orient Today.

The current sectarian system in Lebanon, he said, “is particularly a French mandate that enumerates the confessions or sects that are historically recognized in the country, dating back to the year 1936 and is still enforced today.” France governed Lebanon from 1923 to 1943.

At the time, only 16 confessions were officially recognized by the state. In 1995 and 1996, the Alawite and Coptic Orthodox were added, respectively, by law, increasing the number to 18 recognized confessions.

According to Baroud, all Lebanese citizens have the right to demand their sects be crossed off their civil registry records in one of two ways; either by submitting a request through the Civil Status Registrar or by not assigning a child any specific sect at birth.

Baroud issued the circular in February 2009, and then “in anticipation” of the parliamentary elections that were scheduled to take place on June 7 of the same year, sent an inquiry to the Committee of Legislation and Consultation, which is housed at the Ministry of Justice, asking for their “legal stance.” The question: What if someone who had crossed off their sect wanted to participate in the elections, bearing in mind that the electoral law divides the seats equally between Muslims and Christians, and proportionally between sects and districts?

He was told that a citizen removing their sect does not mean they stop belonging to it. If a person who had crossed off their sect wanted to run for office, they would only need to provide a document that confirms their sect.

“It was a positive reply from [the Committee of Legislation and Consultation], but we never had to use it until recently, with Nasser’s case,” Baroud said.

In Nasser’s case, he presented a certificate from the Jaafari Dar al Ifta, a Shiite religious authority, affirming his religious identity. Despite this, it wasn’t until the intervention of the Shura Council that his rights were recognized.

Speaking to L’Orient Today, lawyer Ayman Raad reiterated that the removal of sects from one’s civil registry records does not disprove their belonging to said sect. But, in practice, it can lead to difficulties, he said, “whenever you have a case where you have to show your sect.”

The need to prove one’s belonging to their sect after it has been removed from official documents might hinder participation in governmental or even personal affairs, despite the law dictating otherwise.

While the Lebanese Constitution explicitly calls the abolition of political sectarianism “a basic national objective,” Lebanon is still governed by both formal and customary rules that distribute state positions among the country’s sects. For instance, under the informal agreement known as the National Pact the President must be a Christian Maronite, the Prime Minister must be a Sunni Muslim, and the Parliament Speaker must be a Shiite Muslim.

This rule has been in place since Lebanon’s independence from France in 1943. Following the Civil War, the 1989 Ta’if Accord altered the functions and authorities of each position, giving rise to the current triple-presidency system and provided for an equal distribution of Christians and Muslims in the cabinet and parliament.

And the case of Nasser, who provided proof of his sectarian affiliation, is different from someone who does not, or will not, seek out such a document from religious authorities, making the Shura Council’s decision equivocal.

Those who wish to cross off their sects and run for office without providing proof of sectarian affiliation, and hence run as a purely secular candidate, are not allowed, because their candidacy, explained Baroud, “cannot be valid for one reason: non-sectarian seats do not exist as per Article 24 of the constitution,” which splits parliamentary seats equally between Christians and Muslims.

Raad expressed his disapproval to L’Orient Today, saying that the Shura Council’s decision was a “step back” and not a win.

“[Nasser] removed his sect from the registrar, but when he [ran] for elections he obliged,” said Raad, referring to Nasser’s proof of his sectarian affiliation. “This is how the law functions, unfortunately.”

He noted that the removal of sect does not, however, take away one’s right to vote.

Baroud noted the irony of someone who has taken the step of removing their sect from official documents being required to show proof of sect to run for office.

“The entire idea of crossing off a sect is that a person won’t have to officially declare which one they belong to,” he said.

BEIRUT — In an apparent victory for those who want sectarian considerations to be removed from politics, the State Shura Council, Lebanon’s highest administrative court, ruled last week that Lebanese who have removed their sect from their civil registry records have the right to stand in elections.The ruling is the first of its kind, known as a “premiere,” according to former Interior...

Fouad Chehab or Elias Sarkis: What kind of presidents for Lebanon?