Saudi Arabia lays the groundwork for its return to Lebanon

According to information obtained by L’Orient-Le Jour, a Gulf Cooperation Council meeting is scheduled to take place on Sunday, a step that could pave the way for the return of Arab ambassadors to Beirut, after they were recalled in October 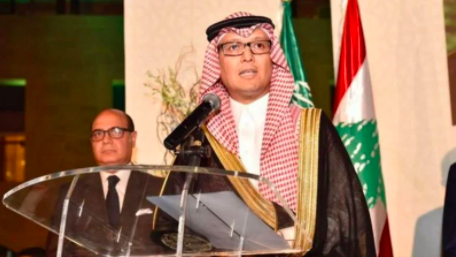 BEIRUT — Is this the end of the rupture between Lebanon and the Gulf countries?

For the first time in months, since the diplomatic row that took place in October 2021 between Lebanon and the Gulf countries, Riyadh appears to be adopting a positive tone toward Beirut.

“Saudi Arabia wants Lebanon to be prosperous and the Lebanese people to live in security and stability,” the Saudi Foreign Ministry said in a statement yesterday.

Could this be the first step toward normalizing relations between the two countries? It is probably still too early to answer this question.

But what is certain for the moment is that the Lebanese dossier is back on the table behind the scenes of Arab diplomacy, and that a Saudi political return to Lebanon appears to be in the offing.

According to L’Orient-Le Jour’s columnist Mounir Rabih, Lebanon’s status should be on the GCC meeting agenda.

The meeting is slated to take place on Sunday and could result in a green light being given to Arab ambassadors to return to Beirut after they had been recalled in the wake of the diplomatic crisis with the Arab monarchies back in October 2021.

Riyadh’s shy overtures to Beirut can be explained in the context of last week’s Paris meeting between Patrick Durel, an advisor to the French president for Middle East affairs, Walid Bukhari, Saudi Arabia’s ambassador to Lebanon and Nizar Alawla, representing the Saudi royal court, as well as Khaled Saadoun, a senior official of the Saudi intelligence service.

During the meeting, Durel, who has always been involved in the Lebanese dossier, allegedly suggested that Bukhari return to Beirut, according to Rabih.

A joint French-Saudi committee was also formed to allow better coordination between the two countries on the matter.

A few days later, the committee held a virtual meeting during which Durel allegedly renewed his request to Bukhari to return to Beirut as a gesture of goodwill.

L'Orient-Le Jour learned that the Saudi diplomat could return to Lebanon during the month of Ramadan, in April, to closely monitor the distribution of humanitarian aid from the fund that was agreed upon on Dec. 4, 2021, between French President Emanuel Macron and Saudi Crown Prince Mohammed bin Salman in an attempt to provide support for the Lebanese people.

There has been talk about the beginnings of a Saudi political return to Lebanon in the local media and, according to information confirmed by L’Orient-Jour, and about meetings held in Paris between Saudi and Lebanese officials.

Almost two weeks ago, former Lebanese Prime Minister Fouad Siniora met with Saadoun in the French capital, as part of his preparations to participate in the electoral race, despite the decision of the Sunni leader, Saad Hariri, to boycott the May 15 polls.

Several other Lebanese political figures are expected to visit Riyadh soon. Wael Abu Faour, MP for Walid Joumblatt’s Progressive Socialist Party in Rashaya and Melhem Riachi, a former information minister affiliated with the Lebanese Forces, were already in Riyadh yesterday, not to mention their previous visit to the kingdom in December 2021.

“Ziad Hawat (LF MP for Jbeil) and I will pay a visit to Saudi Arabia, the United Arab Emirates and Paris as part of our electoral tour,” Riachi told L’Orient-Le Jour.

Mikati is paving the way

Prime Minister Najib Mikati picked up the signal of a possible thaw in relations between Lebanon and the Saudi kingdom in the wake of a roadmap that was relayed to Beirut through Kuwait in January.

The document, however, included highly contentious terms, such as the disarmament of Hezbollah — a condition that was discussed by Mikati and Kuwaiti Foreign Minister Ahmed Nasser al-Mohammad al-Jaber al-Sabah during a phone call on Saturday.

The Kuwaiti senior official expressed “satisfaction” with the Lebanese “government’s initiatives to restore relations between Beirut and the Gulf countries,” a first positive message from the Arab states.

“Saturday’s phone conversation reflects an Arab willingness to relaunch efforts in a bid to normalize relations between Lebanon and the Gulf monarchies,” a close associate of the prime minister told L’Orient-Le Jour.

“It was therefore impossible for the head of government not to take a stance to confirm Lebanon’s unwavering position on this issue,” the source added.

In an interview to the Saudi daily Asharq Al-Awsat that was published on Monday, Mikati appeared to give a wink to Arab countries, Riyadh in particular.

“The Lebanese government is extremely committed to maintaining the best of relations with the Gulf monarchies, led by Saudi Arabia, in order to remedy the shortcomings that have marred them," he said, assuring that Lebanon has a positive attitude toward the Arab roadmap.

A few hours later, Mikati issued a statement in which he reiterated his government's commitment to restoring diplomatic relations with the GCC.

He also reaffirmed Lebanon's determination not to allow the country’s financial and banking system to be used in operations that “could undermine the security of Saudi Arabia and the GCC countries.”

The premier also called for “halting any political, military, security and media activities that undermine the sovereignty,” of these countries — a clear message to Hezbollah, and a reference to Captagon trafficking from Lebanon, which is a particularly sensitive issue for the Saudis.

Mikati sought to reassure the kingdom in this regard, saying, “We want to take all measures to prohibit the trafficking of illicit products, including Captagon pills, to the Gulf countries.”

Hezbollah digs in its heels

Lebanon did not have to wait long for Saudi Arabia's reaction. In a statement yesterday, the Saudi Foreign Ministry welcomed Mikati’s remarks, expressing hope that this will allow “Lebanon to recover its role and place, both regionally and internationally.”

Except that contrary to the prime minister’s expectations, normalizing relations with the Gulf monarchies does not seem to be an easy feat, especially since Hezbollah, Riyadh’s antagonist, intends to turn a deaf ear to the premier’s calls.

“Hezbollah will not abandon its opponents either in Bahrain or in Saudi Arabia,” said Mohammad Obeid, an analyst close to the party.

“When the prime minister calls on Hezbollah not to harm Saudi Arabia, he must ensure, in return, that the party is not in the crosshairs of the Saudis who classify it as a terrorist organization,” he added.

Finally, while Lebanon is preparing to embark on a new chapter with the Gulf countries, Iranian Foreign Minister Hossein Amir-Abdollahian has decided to visit Beirut. He is scheduled to arrive today in the Lebanese capital as part of a tour that should take him to Damascus as well.

BEIRUT — Is this the end of the rupture between Lebanon and the Gulf countries?For the first time in months, since the diplomatic row that took place in October 2021 between Lebanon and the Gulf countries, Riyadh appears to be adopting a positive tone toward Beirut.“Saudi Arabia wants Lebanon to be prosperous and the Lebanese people to live in security and stability,” the Saudi Foreign...