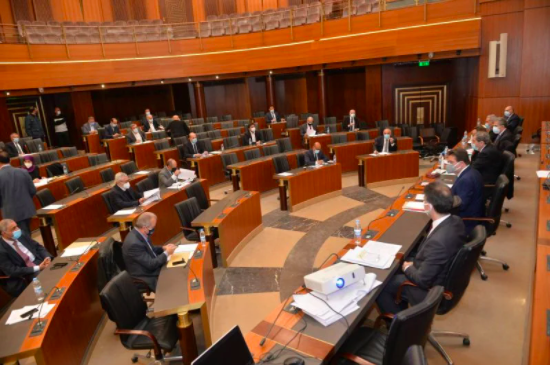 BEIRUT – The 2022 budget proposal has finally made its way to Parliament, and another round of jostling is about to start.

While some of the most controversial provisions from the earlier draft presented to the cabinet have been removed or changed, legislators will likely continue to argue over proposed tax increases and other politically unpopular measures set forth in the proposal. The budget proposal is expected to be taken up by the Finance and Budget committee early next week and members of parliament have promised their electoral base that they will go over the 1,371 pages with a fine-tooth comb before they will vote on the budget in the general assembly. L’Orient Today obtained a copy of the amended document and has broken down the most important changes.

The deficit estimated by the government amounts to LL8.21 trillion and is the result of a projected LL47.32 trillion in expenditures and LL39.11 trillion in revenues.

The new estimated deficit is 10 percent smaller than the number initially presented by the finance ministry. If the LL7.2 trillion set aside for reserves is removed, the final deficit narrows down to LL1 trillion. These numbers, when converted to US dollars at the parallel market rate, are the equivalent of $2.3 billion for the expenditures and $400 million for the deficit before the adjustment and $50 million after the adjustment.

These figures, however, do not include the LL5.25 trillion loan to Electricity du Liban. The loan was eliminated from the budget proposal as a comprehensive plan for the electricity woes is currently being separately discussed by the government. Its passage is a precondition for the World Bank to fund proposed deals under which Lebanon would receive natural gas from Egypt and electricity from Jordan.

In the amended version of the budget some of the more controversial articles have either completely disappeared or have been slightly tweaked. For instance, an article that granted the finance minister special powers in setting the exchange rate for the calculation of taxes was reworded to stipulate that only the cabinet as a whole will be afforded such a privilege.

Furthermore, any language differentiating between “fresh dollar” accounts and local dollar or “lollar” accounts has been removed. Articles about banks paying back deposits in their original currency were taken out, as was an article related to increasing the insurance limits on bank deposits and setting new ones for fresh dollar accounts set up to receive foreign currency from abroad. The only remaining reference to new US dollar accounts is one interest paid on these accounts will be exempted until the end of December 2024 from the 10 percent tax.

The government is also proposing that all unused telecom prepaid recharge cards be considered as expired. The budget document proposes to refund merchants and individuals the money paid for them. The budget draft stated that this measure is to counter the hoarding and monopoly of the cards by merchants looking to score a quick profit. This measure comes on the back of telecom companies converting users’ balances from US dollars to lira in anticipation of upcoming increases of tariffs.

Another important addition to the new draft is the proposed increase in the fees for work permits. Fees would be increased to LL16 million from LL3 million, or more than five-fold, for the first category work permits, with similar percentage increases on other categories.

The government is also proposing to pay back arrears to the NSSF over five years, with the first payment to be made before the end of September. The text states that reimbursements can be made through the issuance of treasury bonds in Lebanese lira.

The budget proposal also sets new fees to be charged by the Ministry of Youth and Sports of Lebanon, when previously no such fees existed. For instance, going forward federations, clubs, scouts’ associations, and gyms would be subject to licensing and recurrent annual fees.

In addition to the change in currency from lira to the US dollar for the calculation of the exit fee on air travel, the government is proposing to charge $4 to travelers in transit. The fee would be included in the airline ticket price.

Notwithstanding the chaotic way the budget was approved during the last cabinet meeting, which led to some confusion as to whether it had actually been passed or not, only two weeks were required to discuss, amend and approve the document prepared by Finance Minister Youssef Khalil.

The ball is now in the parliament’s court and based on the position of the different political parties, the process appears likely to be protracted. The International Monetary Fund’s negotiating team will be back in mid-March, the central bank is hemorrhaging US dollars and parliamentary elections are two months away. Whichever way the whole situation plays out, one thing is certain: Lebanon is running of time and the margin of maneuver is shrinking.

BEIRUT – The 2022 budget proposal has finally made its way to Parliament, and another round of jostling is about to start.
While some of the most controversial provisions from the earlier draft presented to the cabinet have been removed or changed, legislators will likely continue to argue over proposed tax increases and other politically unpopular measures set forth in the proposal. The...