Why is Bassil afraid of the diaspora vote?

In the North III constituency, the seat of the Free Patriotic Movement leader Gebran Bassil and the district where Lebanese living abroad have the largest share of registered votes, the upcoming elections appear to be a battleground for the potential presidential candidates. 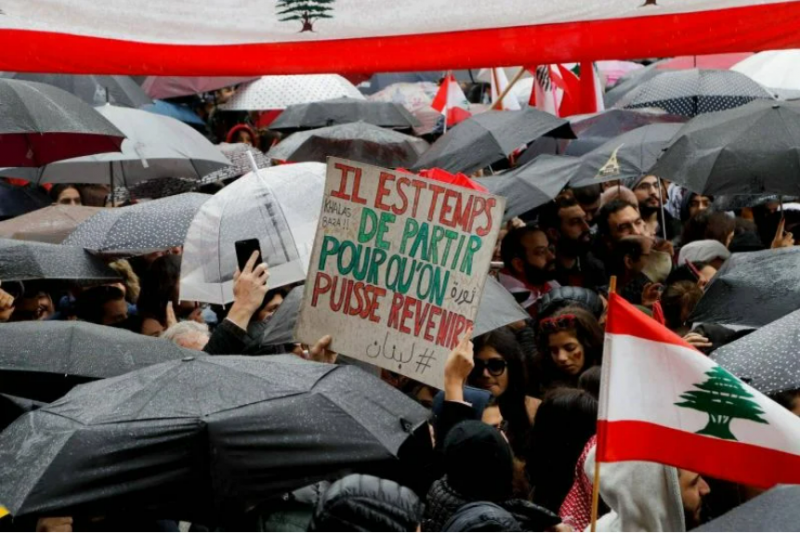 A demonstration that took place in Paris during the street uprising on October 2019. (Credit: AFP file photo)

That’s it. The die is cast. More than 225,000 Lebanese living abroad signed up to vote in the May 2022 parliamentary elections, almost triple the number of those who registered for the last parliamentary polls in 2018.

A few months out from the elections, civil society groups are betting on expat voters who, for them, embody the main hope for change.

But for other political parties, chief among them the Free Patriotic Movement, the expats’ vote is a source of great concern.

The party of President Michel Aoun and his son-in-law Gebran Bassil want the vote of the Lebanese living abroad to be limited to a single constituency, the 16th, which would allow them to cast their ballots for six MPs (representing the six continents) in addition to the 128 deputies who currently make up Parliament.

This provision, originally stipulated in the 2017 electoral law, would, according to the reformist groups, “contain” the diaspora vote and limit its impact in the elections.

The Aounists fear that the discontent in the streets has shrunk their popular base and that the expats’ vote in several key constituencies would cost them dearly.

According to a study by the Beirut-based Information International center, of the 225,114 registered expatriates, 119,454 are Christians and could therefore vote for FPM rivals, such as the Kataeb, the Lebanese Forces, or civil society groups.

“Many opposition parties are betting that the Lebanese living abroad will shun the parties in power. Having left Lebanon en masse since the beginning of the crisis and having taken part in the protest movement, these new expats could be an important source of support for the opposition,” Mohammad Chamseddine, policy and research specialist at Information International, told L’Orient-Le Jour.

It is with this perspective in mind that the anti-establishment groups mobilized in a bid to push the Lebanese living abroad to register in November 2021. “However, there are no figures to assess [the validity of] this reasoning,” Chamseddine said.

Compared to the two Shiite political parties, Hezbollah and the Amal Movement, which are not likely to face much hardship in getting votes; and to the LF, which seems to have gained popularity within Christians, especially after the armed clashes in Beirut’s Tayyouneh neighborhood in October 2021; and the Future Movement which announced that it was not entering the fray this time around; the FPM appears to be preparing for an uncertain battle.

Should the hypothesis of a rancorous diaspora breaking free from the clientelist networks prove to be true, the FPM could find itself between a rock and a hard place, particularly since its alliance with Hezbollah has harmed the party’s legitimacy in the eyes of a sizeable portion of the Christian electorate, and especially since the 2020 Beirut port explosion.

In the predominantly Christian areas of Mount Lebanon, where the Aounist party has 12 MPs, more than 7 percent of the registered voters are Lebanese living abroad, which gives them significant influence, especially if the turnout is as high as the 2018 election, when 56.4% of expat voters cast their ballots.

‘The FPM could be routed’

In Mount Lebanon III (Baabda), which elected two Aounist MPs in 2018, 13,271 non-resident Lebanese registered to vote in the upcoming elections (i.e., about 7.7 percent of the electorate), including 8,800 Christians (66 percent).

In the North III, where the FPM has two deputies including Bassil, the diaspora has the largest share of registered voters. The elections in this constituency, which brings together the districts of Batroun, Bsharri, Koura and Zgharta, appear to be a real battleground for the potential presidential candidates.

With more than 26,000 registered voters, almost all Christians, non-resident voters represent 10 percent of the electorate — a significant electoral bloc on their own.

These Christian voters, however, are not necessarily loyal to the FPM.

In 2018, the diaspora voters in the North III constituency preferred the LF-backed Strong Republic Pulse list to the Strong North list supported by the FPM and the Independence Party of Michel Moawad, with respectively 32 percent and 29 percent of the votes.

In 2022, moreover, the Aoun’s party will have to go to battle alone.

The alliance between the Aounists and Moawad did not survive the Oct. 17, 2019 popular uprising. The Zgharta MP broke away from the FPM’s Strong Lebanon parliamentary bloc before resigning from parliament to position himself with the protest movement.

In 2018, Moawad was able to court and seduce the diaspora. He was the candidate who received the most preferential votes in Zgharta, winning more than 32 percent of the voters.

Moreover, a third of the Lebanese living abroad who voted for the FPM list in North III granted their preferential vote to Moawad.

This suggests that the expats’ vote could darken the electoral horizon of Aoun’s party.

“The FPM could be routed. The stakes are high. The Lebanese voters abroad could cause it to lose at least eight seats,” a source close to Hezbollah, FPM’s main ally, told L’Orient-Le Jour on condition of anonymity.

Is the Aounists’ attachment to the 16th constituency explained by these electoral calculations?

On the FPM side, this hypothesis is brushed aside.

“We continue to insist on the 16th constituency,” Alain Aoun, MP in Baabda, said, stressing the need to respect the electoral law.

“It is inacceptable to deprive the Lebanese of a right guaranteed by the Constitution, namely equality with residents in Lebanon in terms of the right to vote and to stand as candidates,” Bassil said at the end of 2021.

According to local media reports, the issue of the amended electoral law, which the Constitutional Council failed to decide on in December 2021, is likely to resurface soon, with some speculating that it could serve as a pretext for postponing the polls in case the final details in relation to the vote in the 16th constituency are not settled.

“For the moment, there’s nothing new on the subject. The other political blocs have not changed their minds on the issue,” Alain Aoun said.

The Amal Movement of Parliament Speaker Nabih Berri, President Aoun’s archenemy, is fiercely opposed to the electoral law based on the 16th constituency and will dig in its heels.

“The Development and Resistance Bloc (made up of Berri’s MPs) maintains its opposition to the 16th constituency,” Mohammad Khawaja, Amal MP in Beirut, told L’Orient-Le Jour.

“No bill regarding the 16th constituency has been brought forward and therefore there are no discussions about that,” a source close to Berri said.

That’s it. The die is cast. More than 225,000 Lebanese living abroad signed up to vote in the May 2022 parliamentary elections, almost triple the number of those who registered for the last parliamentary polls in 2018.A few months out from the elections, civil society groups are betting on expat voters who, for them, embody the main hope for change.But for other political parties, chief among...