In announcing his withdrawal, the former prime minister leaves behind a fragmented Sunni scene. 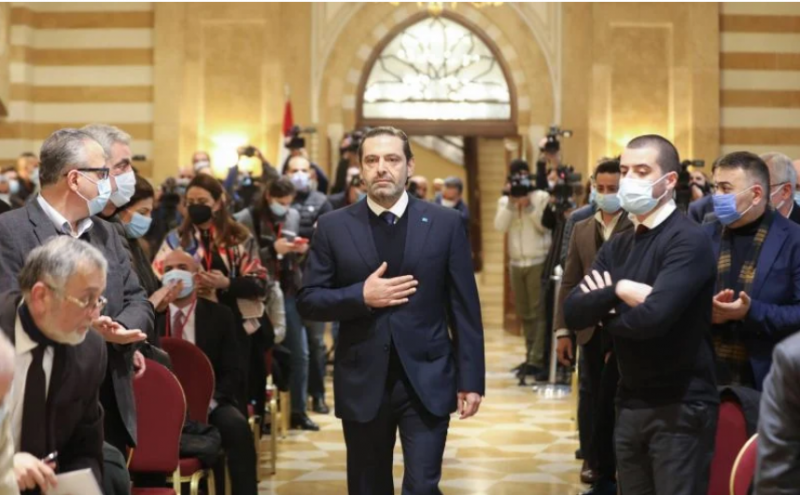 The leader of the Future Movement, Saad Hariri, leaving the room after a speech in which he announced his retirement from Lebanese political life, Monday, at the Beit al Wasat in Beirut. (Credit: Dalati and Nohra)

It was an earthquake for the Sunni scene and, to a lesser extent, for Lebanon. Former Prime Minister Saad Hariri announced on Monday that he would not participate in the upcoming parliamentary elections and encouraged members of his party, the Future Movement, to follow his lead and boycott the elections.

This major upheaval on the internal scene will undoubtedly affect the Lebanese political landscape and the balance of power that has been maintained, for better or worse, for over a decade.

After the announcement by the leader of the Future Movement of his withdrawal from political life, which is said to have been dictated by the Gulf countries, several questions arise: Has the Sunni community become an orphan without leadership? If so, will the majority of its voters boycott the legislative elections, out of spite or to punish the potential heirs in the race? Will the vote still take place if a significant component of the Sunni community withdraws from the game, while some, including Parliament Speaker Nabih Berri, are already arguing that this would go against the spirit of the national pact?

Saad Hariri's withdrawal completely changes the equation, since it creates a vacuum that no one is able to fill at present. But because it comes in a context of decline, for years, of the Hariri influence and because the possibility has been on the table for weeks, reactions on both sides have remained rather measured.

"Mohammad is dead, but his community has not disappeared."

A former Sunni minister reacted to Hariri's announcement with this well-known adage, suggesting that no one is truly indispensable or irreplaceable. For many Sunni actors, it is even an "insult" to consider that the community is no longer represented and that "the world will end" with the departure of the leader of the Future Movement.

Certainly, almost everyone recognizes that the former head of government continues to enjoy wide popularity. However, particularly since the election of 2018 in which the Future Movement came out the worse for the wear, this popularity seems to be in clear decline. Only the popular vote of May 2022 will make clear what the situation really is and whether, as a reaction to the withdrawal of their leader from political life, the pro-Hariri contingent will spurn the ballot box.

"It is in no way acceptable to think that the Sunni community, which is an essential and founding component of Lebanon, is monopolized by one person, even if it is Hariri," said MP Fouad Makhzoumi of the Beirut II district, who is positioning himself as one of the candidates for Sunni leadership. "That Hariri decides to step down is his personal choice and does not oblige [all] the Sunnis," who, he adds, include statesmen, notables, and well-known figures in all areas of public and private life.

The Lebanese Forces lying in wait

From now on, there are several figures, some better known than others, who will compete for the votes of the Sunni community until a leading figure can impose himself and take up the torch.

"The 2022 Future Movement is no longer the 2005 Future Movement," summed up an official with the Lebanese Forces, a formation that claims to attract — in alliance with Sunni figures — the votes of voters traditionally loyal to Hariri. Having endorsed an alliance with former minister Ashraf Rifi, whose popularity is substantial in Tripoli, and being "in contact" with Fouad Makhzoumi, the LF has become, in the eyes of Saudi Arabia, a more profitable card to play than the Future Movement. It is on them that the kingdom now seems to be placing its bets to change the course of the political situation in Lebanon and reverse compromises such as the one concocted between the Future and Hezbollah.

Apart from former Prime Minister Tamam Salam, who announced before Hariri that he did not intend to run, the other heavyweights of the Sunni scene do not seem to have made their decision yet. Neither former Prime Minister Fouad Sinioura nor current Prime Minister Najib Mikati have made any definitive statements in this regard. According to L'Orient's political columnist Mounir Rabih, the leader of the Future has, however, been working hard in recent days to convince them to follow suit, creating a wider Sunni boycott of the election, which could then be postponed.

In this context, it is still too early to predict who will be the next Sunni leader and whether the Lebanese political landscape will still tolerate a monopoly of communal representation as it has for the past three decades.

"Rafik Hariri came to monopolize the Sunni street by eliminating all the traditional families such as the Bizri (South), the Karami (North), the Hoss (Beirut) and, more recently, the Makhzoumi family (Beirut)," recalled Nawaf Kabbarah, professor of political science at the University of Balamand. The withdrawal of his son could leave a Sunni landscape divided between several fiefdoms, depending on the region and political orientation.

A number of Sunni actors, although smaller in scale than those affiliated with the Future Movement, have also placed themselves under the wing of Hezbollah in recent years out. These are primarily the members of the group known as the "March 8 Sunnis."

"This equation may change now that Saad Hariri has retired, leaving the field a little freer for personalities like Jihad al-Samad and Abdel-Rahim Mrad to regain their political independence," Kabbarah said. Even Faisal Karami, another one of the Shiite party's protégés, could have more freedom, continued the political scientist.

But if political Harirism seems to be at the end of its reign, it is never far away; on the one hand, because a large portion of the contenders for the Sunni leadership position claim to be Harirists, and on the other hand, because Saad's brother, Bahaa Hariri, no longer hides his political ambitions. For several months now, he has been very active on the internal scene, infiltrating the media and creating a party that is getting ready to enter the electoral battle.

But if the withdrawal of Saad Hariri was prompted by the Gulf countries, it is not certain that they prefer his brother or that they have encouraged him in this direction. Moreover, the elder Hariri is keeping a low profile and says publicly that he does not want to run in the elections. But at the same time, he is sponsoring lists close to the October 17 protest movement, having grasped very early the change of mood among a large majority of Lebanese after the crisis.

According to an old hand on the Sunni scene, the withdrawal of Saad Hariri is also part of a particular regional and international context: "The Gulf countries and the West strongly encourage the change of the current political establishment in Lebanon."

It was an earthquake for the Sunni scene and, to a lesser extent, for Lebanon. Former Prime Minister Saad Hariri announced on Monday that he would not participate in the upcoming parliamentary elections and encouraged members of his party, the Future Movement, to follow his lead and boycott the elections. This major upheaval on the internal scene will undoubtedly affect the Lebanese political...