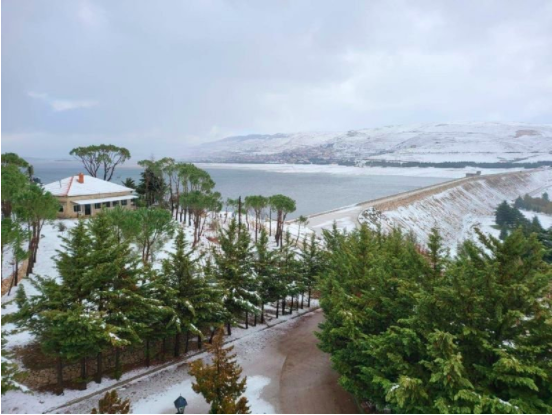 • Snow fell overnight and this morning at altitudes of 900 meters and above. Roads at an altitude of 800 meters are accessible to cars equipped with metal chains, however areas that are 1,500 meters above sea level are completely closed.

• This snowstorm, named “Hiba,” will continue to hit Lebanon until Friday. Lebanon is expected to observe a further significant drop in temperatures with snowfall in areas above 1,000 meters during the day, and above 600 meters at night. On Thursday it will be partly cloudy, with a further temperature decrease, fog and snow starting at altitudes of 600 meters.

• Bulldozers from the Public Works Ministry removed snow from the main roads in the villages of: Ainata, Bleika, Mshetiya, Deir al-Ahmar and Yammouneh, while the municipalities took over snow bulldozing operations in internal roads, the NNA reported.

• Snow in Baalbek only consisted of a thin layer within the city and on main roads, while the surrounding highlands and hills were covered with about 10 centimeters of snow, and the temperature dropped below zero. Baalbek schools closed Wednesday, the NNA reported.

• Most villages and towns in the district of Bsharri were covered with snow starting at an altitude of 700 meters on the outskirts of the town of Turza, and bulldozers from the Public Works Ministry and municipalities are opening the main and secondary roads, while the road from Bsharri to the Arz is closed completely due to snow.

• Municipalities and the Civil Defense on social media warned people living in the mountains not to leave their houses unless necessary, and to equip their cars with metal chains.

US State Department weighs in on Lebanon elections

Lebanon has registered 119 COVID-19 cases in the past 24 hours. Two people have died, raising the death...