Five months out from legislative elections, who are the official candidates of the Lebanese opposition? 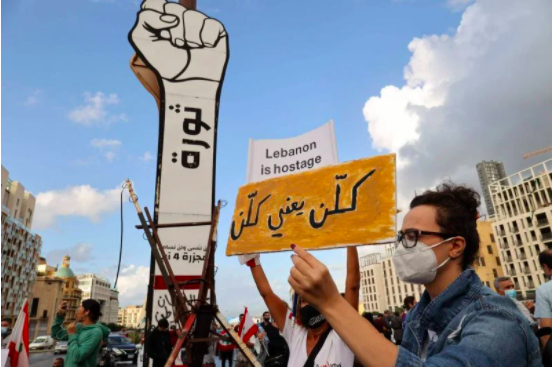 Demonstrators protesting near the Fist of the Revolution, symbol of the October 17, 2019 protest movement, in downtown Beirut on October 17, 2021. (Credit: Anwar Amro/AFP)

After weeks of uncertainty, the parliamentary election date was finally set for May 15. Who will run in these elections, however, remains thus far mostly unknown.

This is especially the case with the groups and parties claiming to be part of the popular uprising of Oct. 17, 2019, and they have only five months to establish themselves as worthy candidates.

L’Orient-Le Jour took stock of the main opposition movements in an attempt to draw up a non-exhaustive list of their declared candidates, pending the official announcement of electoral lists and alliances.

One of the oldest political parties in Lebanon, the National Bloc was relaunched in 2018 as a party opposed to the ruling class, positioning itself as a centrist group on the political spectrum.

The National Bloc was heavily present in the 2019 uprising, allowing it to develop a considerable reputation.

In July 2021, the party launched its electoral platform, emphasizing a move toward a secular state, a state monopoly on arms, and the fair distribution of losses in the aftermath of the economic collapse.

Antoine Moukheiber, an official in the National Bloc, told L’Orient-Le Jour the names of the candidates who are already nominated to run for election:

The National Bloc stressed that this is not the final list and that candidates from other areas such as Zahle, Akkar, Beirut and Batroun should be selected at a later date, pending the finalization of electoral alliances and lists.

The party is hoping to reach an agreement with the different branches of the reformist camp, in order to present a single list in each of the 15 electoral constituencies.

The Lebanese electoral system that was adopted in 2017 imposes relatively high electoral thresholds, which encourage the creation of alliances.

The National Bloc is also part of the April 13 Call group, bringing together several centrist movements whose objective is to unite the opposition’s ranks.

“There are two possible scenarios. We could present a single opposition list across all areas with the same parties and the same name, or we could come up with more specific lists in each constituency with different alliances depending on the reality on the ground,” Moukheiber explained.

Given the significant variation of political circumstances across Lebanon , and taking into account the many stakeholders whose influence is limited to a single area (such as Oussama Saad in Saida or Neemat Frem in Kesrouan, to name a few), the option of more specific alliances seems more likely.

Unlike the National Bloc, Lana (“For Us” in English) is one of the newcomers among the opposition groups. Founded at the end of 2021, the group is positioned on the center left.

“We are in favor of secularism which respects religious freedoms, which guarantees equal political rights without discrimination. We also believe that there can be no freedom without social justice, and therefore the state must ensure comprehensive medical coverage and access to quality education for all,” Halimé Kaakour, a founding member of the party, told L’Orient-Le Jour. She is also a human rights and international law activist.

In its political program, the newly founded group also emphasizes the safeguarding of human rights, the protection of the environment and the state’s monopoly on arms.

According to Kaakour, Lana has already named three candidates, all of whom are well-known civil society activists, including: Halimeh Karkour in Chouf-Aley (Mount Lebanon IV); Yehya Mawould, operations manager at Middle East Power, in Tripoli (North II); and Hassan Sinno, a researcher and industrial engineer, in Beirut II.

Mawould and Sinno were both unsuccessful candidates in the 2018 parliamentary elections.

“Other names may be announced later, but for now, our main interest is to discuss with our thawra (revolution) partners the possibility of a unified list,” Kaarkour said.

This group, which brings together mainly young people, has so far named Mia Atoui, a psychologist and co-founder of Embrace, an NGO, in Beirut II.

“We want to create a unified opposition list in this constituency with other groups of the April 13 Call, as well as other parties like Taqaddom, Khat Ahmar, etc.” Atoui said.

Taqaddom (Arabic for “Progress”) is another social democratic movement that “advocates for social justice and sustainable development.”

It is a part of the Lebanese Opposition Front, a coalition of opposition groups that includes those emanating from the protest movement, as well as Kataeb and Michel Moawad’s Independence, which are known for their anti-Hezbollah statements.

Houssam Eid, a founding member of Taqaddom, has so far selected three candidates to run in the elections slated for May: Najat Saliba, activist, professor and researcher in atmospheric chemistry at the American University of Beirut; Mark Daou, TV host and businessman in Chouf-Aley (Mount Lebanon IV); and Laury Haytayan, oil and gas governance and geopolitics expert, in Metn (Mont-Liban II).

Taqaddom, which also strives for unity between the opposition parties, hopes for a major national alliance to be formed. “Negotiations are underway to set up a coalition stretching from the Communist Party to Kataeb, united in their opposition to the ruling caste,” Mr. Eid said.

A similar alliance was actually formed in the elections for the Order of Engineers and Architects. The Naqaba Tantafid (“The Order Revolts” in English) list, which won in a landslide.

Khat Ahmar (Arabic for “Red Line”) is another component of the Lebanese Opposition Front. It is a political movement stemming from the Oct. 17, 2019, thawra and it espouses its principles.

Wadah Sadek, a founder of the movement, told L’Orient-Le Jour that the party’s candidates have not yet been selected.

Khat Ahmar, Taqaddom and the Liqaa Tishrine could be merged into a single party, called Amam (Arabic for “Forward”), in the next few weeks. “We decided to wait for the merger to be finalized before selecting the candidates. Putting in place a union similar to ‘The Order Revolts’ is the most important thing for us. Otherwise, the same scenario of the [Beirut] Bar Association may be repeated,” Sadek warned.

The opposition groups had in fact failed to agree on a single candidate to run in the Bar Association’s recent elections, with some groups refusing to support Ramzi Haykal, a bank lawyer, who, in their eyes, could not “stand in the face of the financial establishment which holds the Bar’s assets hostage.” Divided, the reformist camp ended up suffering a heavy setback.

Chamalouna (Arabic for “Our North”), which was recently launched, hopes to see its own candidates running in the North III electoral district, which includes the four districts of Bsharri, Zgharta, Batroun and Koura.

“It is an important electoral district, especially for the presidential election scheduled for this year, given that the three candidates of the system (Gebran Bassil, Samir Geagea and Sleiman Frangieh) have their stronghold in this district,” Riad Tawk, a founding member of the group said.

“Our party is against Hezbollah’s weapons and wants Lebanon to be a state that sticks to the principle of neutrality. We are also against a political system change as long as illegitimate weapons exist,” Tawk said.

Hence, this party espouses positions that are close to the heart of Christian public opinion, in an electoral district where 90 percent of the voters are Christian. However, Chamalouna has yet to select its candidates, waiting for its primaries to be held in the coming weeks.

Madinati (Arabic for “My City”), the social democratic environmental movement, is the political heir to Beirut Madinati. It announced its program a few weeks ago, but refused to share the names of its candidates with us.

“For now, it is important to bring the movements together with the aim of reaching an agreement,” Nahida Khalil, a member of the party, said. Yet, she notes that the party will have “male and female candidates” in several parts of the country.

Citizens in a State

Charbel Nahas’ party, which was founded before the 2016 municipal elections, is still unclear regarding its participation in the 2022 elections.

“Our movement is currently focusing on confronting the financial and political establishment in order to have the syndicates’ assets freed up. The battle’s outcomes will tell us who really wants to join the confrontation and what position we will take regarding the elections,” Maya Hodroj, a member of the party, said.

In November, this movement did not support Haykal for the post of president of the Bar Association, but rather Moussa Khoury, a fervent critic of the “banks’ party” instead.

Also, it has been calling since the events of 2019 for the thawra to impose a dialogue on the political class so as to negotiate a peaceful transition of power to a secular state, considering the elections as a tool in the hands of the system.

Independent figures who are close to the protest movement will also run in the elections. They include former MP and journalist Paula Yacoubian (Ind./Beirut I) who had told L’Orient-Le Jour that she will run in the same electoral district. In 2018, she was the only candidate drawn from civil society to make it to Parliament.

Ibrahim Mneimneh, an urban planner, who ran without success in the in 2018 elections in Beirut II, also told L’Orient-Le Jour that he is seriously considering running, but is waiting for the “grassroots electoral campaign that is still in the preparatory stage” to bear fruit before taking a final decision in this regard.

After weeks of uncertainty, the parliamentary election date was finally set for May 15. Who will run in these elections, however, remains thus far mostly unknown. This is especially the case with the groups and parties claiming to be part of the popular uprising of Oct. 17, 2019, and they have only five months to establish themselves as worthy candidates.L’Orient-Le Jour took stock of the main...