Hezbollah and Amal not so anxious to save Aoun 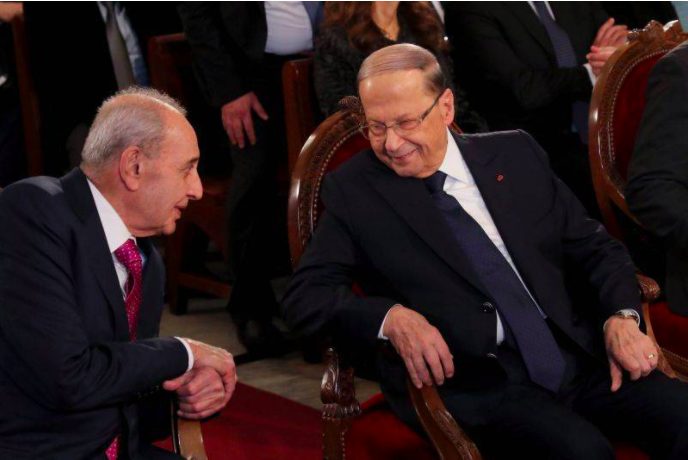 Although President Michel Aoun has taken a disapproving tone, the Amal Movement and Hezbollah do not think that the time has yet come for concessions to be made. The allies insist on stalling the cabinet's work as long as they have not won the Tarek Bitar case.

In order to reach his goals, he is ready to swing into action on all fronts against his opponents, and most importantly, against his allies.

“I agree with scheduling a cabinet session even if it is boycotted,” the president said on Tuesday in a meeting with a delegation of the Press Editors’ Syndicate.

This is the first time that the Baabda tenant expressed so clearly his opposition to the will of his ally, Hezbollah, who has been a key player in the paralysis of the cabinet since Oct. 12. Through these remarks, Aoun sought to push Prime Minister Najib Mikati to convene a cabinet meeting without waiting for a broad political agreement — which seems a long way off — to be reached.

Also, he squarely blamed the government’s lethargy on his main political opponent, Parliament Speaker Nabih Berri, and on Hezbollah, his longtime ally. Through these remarks, the president has widened the gulf between himself and Hassan Nasrallah’s party, with which he has not been on good terms for several months. Disagreements between the two camps have been heard on several issues, including the Aug. 4, 2020, tragedy and the 2022 legislative elections.

“The president sent everyone messages on Tuesday: to the head of the cabinet, to the Amal movement, to Hezbollah … In short, to all protagonists,” a source close to Baabda told L'Orient-Le Jour. “There is a cabinet in power that has won Parliament’s vote of confidence. Hence, it must meet, particularly since the country needs to meet several financial obligations at the end of the year,” he added.

Nevertheless, the president’s verbal escalation could be tantamount to the flogging of a dead horse, as long as the protagonists involved stand their ground.

“The prime minister will not convene a cabinet meeting unless there is a political climate conducive to such a move,” Tripolitan MP Ali Darwish, from Mikati’s parliamentary bloc, told L'Orient-Le Jour.

Such a position is no surprise, especially when it comes from a prime minister who is known for his inclination toward compromise, and for mastering the art of smoothing rough edges. A prime minister who also wants to avoid turning the Shiite tandem against him.

“We understand Mr. Mikati’s attitude, but not to the point [of tolerating] the blockage of the country,” the above-mentioned source close to Baabda said.

The prime minister is convening the ministerial committees during this time out, in order to “clear the way for several decisions that the cabinet must take once it meets,” Darwish added, in response to the accusation that Mikati is “marginalizing” the head of state when it comes to local developments, especially negotiations with the International Monetary Fund.

Hezbollah and Amal have not changed their position one iota: The Bitar case needs to be settled first.

“It is not the fault of Amal and Hezbollah that the cabinet meetings are currently blocked. Rather, it is the fault of the one who infringed on the prerogatives of Parliament,” a minister close to Hezbollah told L'Orient-Le Jour. The cutting remarks he made towards Tarek Bitar are tantamount to an implicit accusation of infringing on the prerogative of the legislature to prosecute politicians before the Supreme Council — a judicial body tasked with trying presidents and ministers.

An MP affiliated with Berri, who declined to be named, used the same logic.

“Tarek Bitar respects neither the Constitution nor the laws in force, which raises questions about his work,” he said. “The solution is very simple. The Constitution needs to be applied and political leaders referred before the Supreme Council,” he added.

Therefore, nothing has changed on the Bitar issue, particularly since Aoun and Mikati stress the need that executive authority not interfere in judicial affairs, by virtue of the doctrine of separation of powers.

“The President of the Republic cannot violate the Constitution. Let the parliament speaker convene a plenary session so that parliament takes up the case,” the source close to Baabda said.

The tough position the protagonists are in when it comes to resuming cabinet meetings cannot be separated from the arm wrestling between Aoun and his camp on the one hand, and Berri on the other. A new phase of this standoff could start after Dec. 31, when Parliament’s ordinary session expires.

Commenting on the cabinet blockage, observers believe that Aoun could go as far as paralyzing Parliament by not signing the decree that allows it to meet in extraordinary session; a discretionary power granted to the president under Constitution Article 33.

In the current political context, such an approach could enable the enforcement of the arrest warrant issued by Bitar against Berri’s right-hand man Ali Hassan Khalil, who does not have to worry when Parliament is in session.

“We're not there yet,” the source close to Baabda said.

Although President Michel Aoun has taken a disapproving tone, the Amal Movement and Hezbollah do not think that the time has yet come for concessions to be made. The allies insist on stalling the cabinet's work as long as they have not won the Tarek Bitar case.Unlike Aoun, they do not see saving the remaining time of the presidential term as a priority. Ten months before his six-year...