Some 30 percent of the trees outside the famous building in Beirut have been savagely pruned or cut down altogether. Many believe that the measure was not necessary. 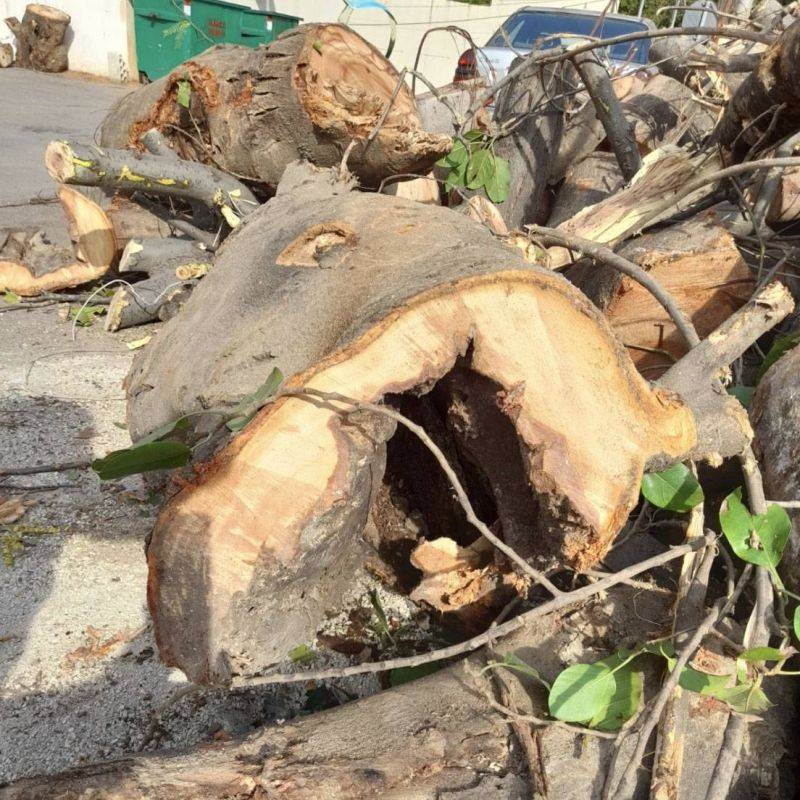 The Beirut fire department conducted the pruning and felling at the Justice Palace. (Credit: Maher Ajouz)

A completely unexpected ecological scandal has shaken the Justice Palace in Beirut. Under the guise of pruning their branches, many hundred-year-old trees planted on the court’s grounds were cut down by the Beirut fire department on Saturday in the space of a morning. An investigation has been opened by the public prosecutor at the Court of Cassation, Ghassan Oueidat to determine responsibility for the action.

What is known so far is that the Justice Ministry requested permission from the Agriculture Ministry to prune the trees because of “the threat to passersby posed by the dense and dry branches,” a statement issued Monday reads. “A forest ranger had been assigned to inspect the site and prepare a report in which he listed 73 trees to be pruned and four others to be cut down,” the statement added, noting that “the mayor of Beirut, Marwan Abboud, entrusted the Beirut fire department to carry out the work.”

The Justice Ministry also said, “The director of the Beirut Forestry Center has issued a report (a posteriori) in which he certifies the compliance of this work with the permit issued by the Ministry of Agriculture.”

However, Nader Gaspard, the head of the Beirut Bar Association, doubts whether the work carried out conforms with that authorized by the permit.

“The Beirut fire department has been asked to prune the trees of the Justice Palace as part of a sanitary and security follow-up of the tree patrimony,” he told L'Orient-Le Jour. “But there is a difference between pruning and cutting,” he said, arguing that the trees were cut when they were not sick.

“As I speak, I am looking out of my office window at a tree trunk that is almost 50 centimeters in diameter. It was sawn while it is as white as snow and does not show any porosity that would be the sign of any disease,” he said.

When contacted by L’Orient-Le Jour, Col. Maher Ajouz, commander of the Beirut Fire Brigade, said that the healthy appearance of the trunk is the result of cutting away all its “rotten” part.

“The trees we cut down were a danger to public safety,” he said.

On Saturday, having seen the extent of the damage, Gaspard contacted Oueidat, while the secretary-general of the Bar Council, Saad Khatib, contacted the director general of the Justice, Mohammad Masri, to ensure the chainsaws and electric saws would be prevented from cutting more trees.

In the meantime, "30 percent of the trees had already been savagely pruned or cut down," Khatib told L’Orient-Le Jour.

Did the trees really need to be cut down?

Marc Beyrouthi, an ethnobotanist, to whom L'Orient-Le Jour submitted photos of cut trees, believes that “the cutting could have been avoided, especially since some of these trees were powerful species and therefore not likely to fall, despite the porosity that affected them.”

“In any case, the trunks should not have been sawn in such a barbaric way,” he said.

In its statement, the Justice Ministry does not recognize that any environmental damage was caused by felling the trees.

Khatib, for his part, addresses his criticisms to both the justice and agriculture ministries, which according to him “have not sent elements to monitor the proper conduct of work.”

He also asked “why it was not the municipality that removed the trees, when it is the party entitled to do so.”

“It is not the [role of] firefighters to perform such a task. They can incidentally accompany the municipal agents where the trees are too high,” he said.

When presented with this argument, Ajouz responded that “the municipality is understaffed.”

He says that, alongside Lt. Mohammad Hadba, he made an inspection tour of the Justice Palace courtyard a month ago. “Roots were branching out above the ground and trees were growing between the steps of the stairs,” he explained.

Following the cessation order issued by the prosecutor and the opening of an investigation into the incident, the work is not likely to resume until further notice, sources say.

However, a question remains: a good part of the cut wood had disappeared the day after the felling, even though it had not been entirely cleared by the firemen. The public prosecutor's office should investigate to know who took it. Ajouz assured L’Orient-Le Jour that his team had nothing to do with the disappeared logs, contending that unknown people had already cut trees before he took over the work.

A completely unexpected ecological scandal has shaken the Justice Palace in Beirut. Under the guise of pruning their branches, many hundred-year-old trees planted on the court’s grounds were cut down by the Beirut fire department on Saturday in the space of a morning. An investigation has been opened by the public prosecutor at the Court of Cassation, Ghassan Oueidat to determine...