Some 75,000 vulnerable families in Lebanon will soon be in receipt of $25 per month

The Social Affairs Ministry will have to choose 39,000 families from among 130,000 files submitted to its centers. The program already provides assistance to 36,000 households. 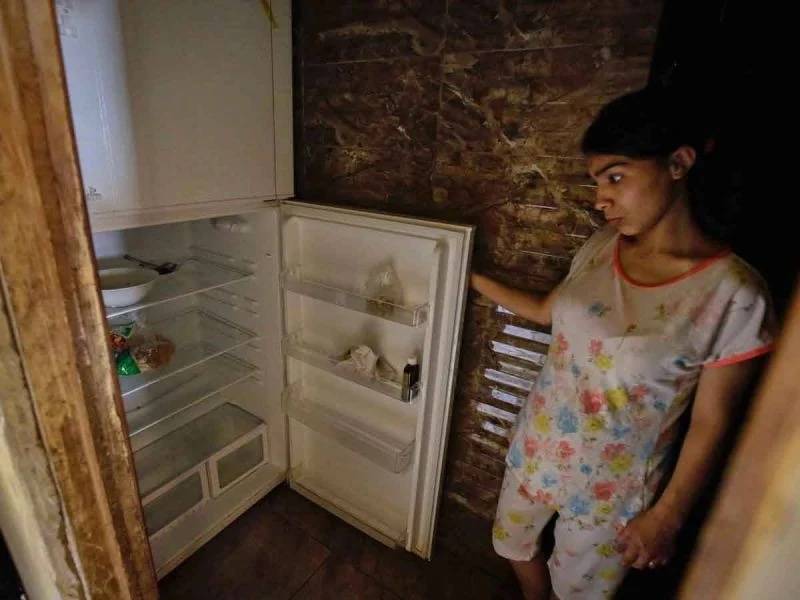 A woman looks at her empty fridge in Tripoli. (Credit: Ibrahim Chalhoub/AFP)

The Social Affairs Ministry is set to double the number of households receiving monthly financial assistance through the National Poverty Targeting Program. Launched in 2011, the program currently assists 36,000 Lebanese families and will soon add 39,000 households that have recently fallen into poverty. This should bring the number of families benefiting from NPTP cash assistance to 75,000, a total that speaks volumes about the tragic deterioration of the economic and social situation in Lebanon and that probably falls short of the real number of families in need. According to the latest estimates by the United Nations Economic and Social Commission for Western Asia, 78 percent of the Lebanese population now lives below the poverty line.

“Families who already receive NPTP assistance receive $25 per month paid in NPTP currency. They are also entitled to an additional $15 for each family member. These same amounts will be granted to new beneficiary households once their files are validated,” explained Ola Boutros, advisor to the social affairs minister and head of the Lebanon Crisis Response Plan.

NPTP grants were previously paid in Lebanese lira, but they were converted into “fresh” dollars last September in order to boost families’ purchasing power, in a context of violent devaluation of the lira and galloping inflation. The NPTP is funded by the European Union, Germany, Canada, Norway, Italy and France. It is led by the World Food Program, in coordination with the Social Affairs Ministry.

When asked about the number of households that have recently fallen into poverty, Boutros said the ministry does not have official data on this, but is working on building a database.

“Every day, more people fall into poverty in Lebanon, which makes it difficult to calculate. Moreover, poverty is now multidimensional,” Boutros said.

She also revealed that "the country does not have official figures on the evolution of poverty.”

“We are currently working to collect data on households living in poverty. We are basing ourselves on the information centralized on the Impact platform (used by the authorities to receive, among other things, applications for social assistance),” Boutros told L’Orient-Le Jour.

On the Impact website, which lists both vulnerable populations and people vaccinated in the country, many figures are available to the general public, but most of the data is not dated, which makes it difficult to understand the evolution of the crisis or the needs of the Lebanese.

Boutros also revealed that the selection of new families to be included in the NPTP will start very soon.

“A total of 130,000 Lebanese families have applied to the centers under the ministry to be included in this program. Our social workers will soon start field visits to select the most vulnerable households,” she said.

“The WFP is training 450 social workers from the ministry who will go to the households to conduct the interviews. The goal is to review all the files by February. As soon as a file is verified, the family will start receiving aid immediately," she added, emphasizing that “the aid will be equitably distributed among the different Lebanese regions.”

Rasha Abou Dargham, WFP spokesperson in Lebanon, said that 217,000 Lebanese are currently benefiting from the NPTP program, while another 270,000 people are receiving monthly food packages from WFP.

“When the new families are added to the NPTP beneficiaries, we will reach a total of 800,000 Lebanese receiving social assistance, either through NPTP or food parcels,” she told L’Orient-Le Jour.

“The situation is difficult everywhere in the country. Thirty-five percent of the Lebanese population is now living in food insecurity,” Abou Dargham highlighted.

As for the poverty rate, it has almost doubled in one year. “In 2020, 1.7 million Lebanese people fell into poverty. By 2021, we will have reached 3 million people. The situation is also dire among Syrian refugees. Nine out of 10 refugees are now living in extreme poverty,” the WFP spokeswoman said. .

Abou Dergham also announced that the UN “aims to expand its range of assistance to reach approximately 1.6 million Lebanese in the coming months.

“These 1.6 million people should be able to benefit from monthly assistance through another social protection project, in response to the crisis and COVID-19, called ESSN, and attached to a new aid program, Daem,” she said.

Launched last week with great fanfare, Daem (which means support in Arabic) is expected to be funded by the World Bank and implemented by the Social Affairs Ministry and WFP. In addition to the ESSN project, Daem will also allow the launch of a ration card that should help 500,000 families.

The Social Affairs Ministry is set to double the number of households receiving monthly financial assistance through the National Poverty Targeting Program. Launched in 2011, the program currently assists 36,000 Lebanese families and will soon add 39,000 households that have recently fallen into poverty. This should bring the number of families benefiting from NPTP cash assistance to 75,000, a...