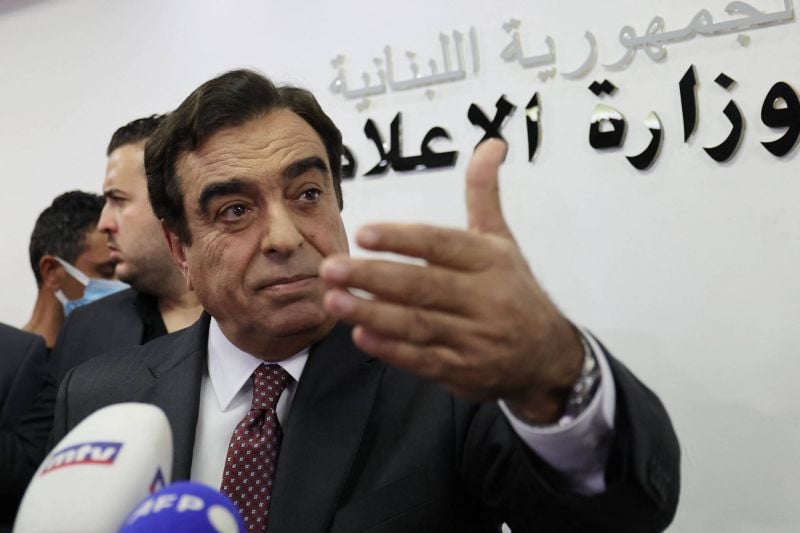 BEIRUT — In the wake of Lebanese Information Minister George Kurdahi’s announcement of his resignation today, some political players, including French President Emmanuel Macron, voiced hopes of an opening in the diplomatic crisis between Lebanon and several Arab Gulf states.

But analysts are skeptical as to whether the move can significantly alter the diplomatic situation.

Kurdahi has been, at least symbolically, at the center of the more than monthlong diplomatic crisis, which began after Al Jazeera aired a talk show episode during which Kurdahi criticized the Saudi war effort in Yemen and expressed support for the Houthi militia. Kurdahi was not yet a minister at the time he made the remarks.

In the aftermath, several Gulf states severed diplomatic ties with Lebanon, and Saudi Arabia went so far as to ban all imports from Lebanon. Many analysts and politicians saw Kurdahi’s resignation as a necessary condition to any improvement in the diplomatic climate, although the Saudi foreign minister said that his government’s dissatisfaction with the Lebanese government went deeper than Kurdahi’s remarks.

Some saw the blowup as the latest proxy battle in the regional political struggle between Saudi Arabia and Iran, intended to put pressure on Iranian-backed Hezbollah, which is allied with the Marada Movement party that nominated Kurdahi to his ministerial position.

“It is much bigger than Kurdahi. It is related to the Saudi-Iranian proxy war that is raging throughout the region, particularly in Iraq, Syria, Lebanon, Yemen,” said Karim Emile Bitar, head of political science at Saint Joseph University. “I think the objective for the Saudis was to show that they still have influence in Lebanon, that they still have leverage. And Kurdahi ended up kowtowing to pressure and resigning.”

Kurdahi was forthcoming about the diplomatic calculations that led to his resignation, saying “I met with [Prime Minister Najib] Mikati three days ago and I understood that my resignation could be beneficial before the upcoming visit of [French President Emmanuel] Macron to Riyadh.”

On Friday evening Mikati said that Kurdahi’s resignation will “open the door to resolve the problem of the relationship with the brothers of the kingdom and the Gulf States.”

French President Emmanuel Macron began a two-day visit to the Gulf today, where he is expected to discuss the diplomatic crisis in addition to finalizing a multibillion dollar arms deal with the United Arab Emirates.

On Friday afternoon Macron commented from the United Arab Emirates that he hoped for “progress” on Lebanon in the coming hours. However no breakthrough was immediately forthcoming.

For over a year Macron has made Lebanon a foreign policy priority for the French government, trying to cajole Lebanon’s politicians to adopt a slate of reforms that come with the promise of international financial assistance, while pleading Lebanon’s case to traditional donor countries like the Gulf states. What Macron thinks he will be able to achieve in the Kurdahi case is unclear.

Heiko Wimmen, an analyst with the International Crisis Group, said that American and French efforts are geared towards keeping the political status quo in Lebanon viable for the time being, with a possible eye towards next year’s parliamentary elections.

“My impression is that external actors right now are trying to put Lebanon, or the current Lebanese political system, on life support.”

Ali Shihabi, a commentator with connections to Saudi officialdom, said Kurdahi’s resignation will make little difference to the Gulf.

“What he said was one symptom of a disease,” he said, which is “Hezbollah’s capture of [the] state.”

Shihabi said Kurdahi’s resignation could result in a “cosmetic gesture to allow Macron to claim a step forward. Macron is liked in the Gulf, and they will want to be friendly towards him and give him something.”

Lynn Zovighian, a social investor knowledgeable about Saudi policy, had a similar analysis. “We have had too many inactions, or too many insufficient actions, for an extremely late action like a resignation to make much of a difference,” she said. She said that formerly close relations between Lebanon and the Gulf have become increasingly mediated by France, to Lebanon’s detriment. “We no longer have a diversified collection of relationships. We are now centralizing a lot of our diplomatic relations vis-a-vis France.” With Macron facing elections in April, she said French mediation is “not a sustainable lifeline” for Lebanon.

Joe Macaron, a fellow at the Arab Center Washington DC, said that “one should not expect a Saudi re-engagement with the Lebanese government” but that on the other hand “the Saudi shock already had its effect, and Riyadh might turn the page.”

Relations between Lebanon and the kingdom had become frosty for years before the revelations of Kurdahi’s critical comments on the war in Yemen. In 2017, Saudi Arabia summoned then-Prime Minister Saad Hariri to the country where he offered his resignation in a televised speech, reportedly under Saudi pressure, only to recant days later after other countries, including France, intervened to reverse the move.

In April of this year Saudi Arabia banned Lebanese agricultural products from entering the country, allegedly in response to the discovery of quantities of the amphetamine captagon hidden in produce shipments from Lebanon. Since the kingdom did not ban imports from Syria, some Lebanese farmers have since resorted to smuggling their fruits and vegetables into Syria and sending them into Saudi Arabia via Syrian traders.

“The attitude has been for quite a while one of disengagement and there’s no real sign that has changed,” Wimmen said.

The entire region has seen complex diplomatic maneuvering in recent months, ahead of negotiations, which began a few days ago, between the United States and Iran over sanctions and the latter’s nuclear program. Jordan and the United Arab Emirates have been restoring ties to the Syrian government, while the US has given its blessing for Egypt, Jordan and Lebanon to cooperate with Syria on two projects to provide electricity to Lebanon.

Meanwhile, Saudi Arabia has held direct talks with Iran in Iraq, and the kingdom is said to be re-engaging with the government in Baghdad, which in recent years has been seen as a zone of Iranian influence. Two Gulf states have also normalized relations with the Israeli government, which continues to occupy territory belonging to Palestine and along its borders with Syria and Lebanon.

With Lebanon careening from crisis to crisis, domestically and regionally, the long-term future is unclear.

“In the end it’s about buying time,” Wimmen said.

BEIRUT — In the wake of Lebanese Information Minister George Kurdahi’s announcement of his resignation today, some political players, including French President Emmanuel Macron, voiced hopes of an opening in the diplomatic crisis between Lebanon and several Arab Gulf states. But analysts are skeptical as to whether the move can significantly alter the diplomatic situation.Kurdahi has been,...