The ball has been in the court of the Constitutional Council since Nov. 17. The council is expected to render a ruling that will be decisive for the 2022 legislative elections within one month of that date. 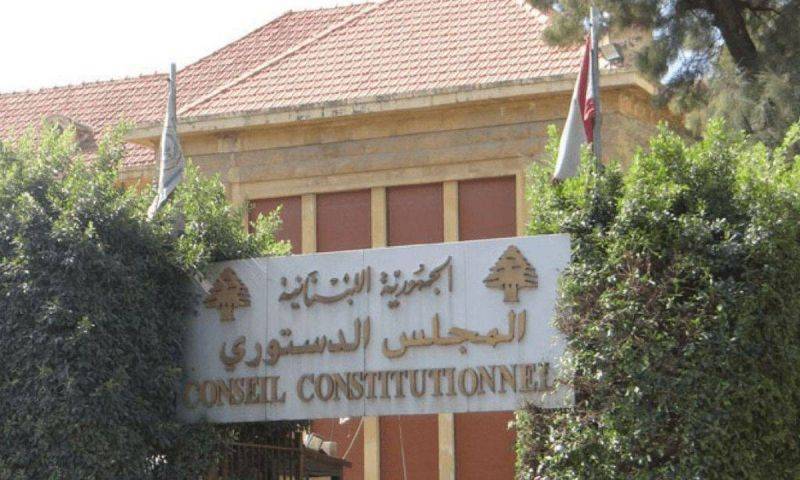 The amendments that Parliament added to electoral law no 44 of 2017, on Oct. 19, were mainly designed to move up the legislative elections’ date from May 2022 to March. Yet, President Michel Aoun rejected this amendment, as well as other changes related to the voting of expats.

Despite Aoun’s refusal, Parliament approved the text on Oct. 28. Then, the Free Patriotic Movement, led by Gebran Bassil, filed an appeal before the Constitutional Council on Nov. 17, to invalidate the amendments to the electoral law.

The Aounist approach raises concerns about holding the elections. The ball is now in the court of the Constitutional Council, which must render its decision within one month from the date of the appeal, i.e., by Dec. 17 at the latest.

Everything we need to know about the Constitutional Council

Origin and structure: The Constitutional Council was established by law no 250 of 1993. Pursuant to Article 2, the council shall consist of 10 members with at least 20 years of experience as judges, lawyers and legal academics. Five of its members shall be elected by Parliament, while the other five shall be appointed by the cabinet.

Term: All 10 members will be in office for a non-renewable term of six years.

Quorum: At least eight members of the council need to be present in order for it to be in session. Decisions are taken by a majority of seven votes.

Timeline for decision-making: After an appeal to invalidate amendments is lodged before the Constitutional Council, the latter shall meet to appoint one of its members as rapporteur tasked with drafting a report on the matter within ten days and to hand over copies to the rest of the members. The council’s president must then convene a meeting within five days from the date of the report’s delivery and decide on the matter within 30 days from the date of the appeal or the legislation de facto goes into effect.

The issues that the FPM is appealing

The elections’ date: The Lebanese were initially slated to go to the polls on May 8 before the date was brought forward to March 27. “A parliamentary recommendation to hold the elections on March 27 was made to the interior minister,” Issam Suleiman, former president of the Constitutional Council, told L’Orient-Le Jour.

He indicated that “the amendments to the electoral law enable holding the ballot in March instead of May.” He pointed to the modification of the voters’ registration deadline. This may deny many Lebanese the right to vote, especially those who will turn 21 in March.

In this vein, Suleiman referred to “ contradicting deadlines.”

“Parliament had previously set Feb. 1 as the deadline for the voters’ registration. Then, it adopted a clause establishing that all those who will turn 21 years old by the polling day will be eligible to vote,” he said.

“The legislative authority has therefore infringed on the prerogatives of the interior minister who is the one entitled to set the elections’ date by a decree signed by both the prime minister and head of state. That is a violation of the constitution, which enshrines the principle of the separation of powers in its preamble,” Suleiman said.

The expat vote: Under Article 3 of law no 44 of 2017, expatriates in 2018 voted for the very first time in legislative elections. They cast their ballot for all 128 MPs in the country’s 15 electoral districts. The same law states in Article 122 that expats shall vote for only six MPs to represent them in the next ballot in 2022 (three Christians and three Muslims allocated to six continents) in an electoral district that will be added to the existing 15 constituencies.

Yet, Parliament suspended the enforcement of this article in October. The Aounists thus advocate, through their appeal, for the Lebanese of the diaspora to vote for six MPs. For Suleiman, setting up the 16th district is a violation of Article 24 of the constitution. This text divides parliamentary seats equally among Christians and Muslims, based on the religious communities and regions. “This last point focuses on the regions in Lebanon. This means that the Lebanese must choose their MPs among candidates competing within Lebanon,” the judge said.

He added, “In order to create the expatriates’ district, Parliament has to amend the constitution, by incorporating in paragraph c of article 24 the diaspora countries. This has not happened yet.”

According to him, the real threat to the holding of the ballot lies in adopting the 16th district, particularly since such an approach requires logistical and political preparations related mainly to the candidates’ choice and their distribution among the six continents.

Former Interior Minister Ziad Baroud does not share this opinion. For him, “it is technically possible to organize the election of the six MPs representing the expats.”

The magnetic voting cards and mega-centers: These consist of means enabling the Lebanese to vote near where they live rather than in their town of origin. The mega-centers and magnetic voting cards, provided for in the text adopted in 2017, were supposed to be used in the elections that were held on May 6, 2018. But this clause was suspended, after the cabinet argued that it was unable to make the necessary preparations for the mechanism within one year.

Article 84 of law no 44 of 2017 stipulates that the government should take all measures to implement the magnetic card during the next ballot, namely in 2022. But Parliament backed out in October by suspending this article, on an exceptional basis and for one time only.

“The non-application of the magnetic card is a breach of the principle of equality between the Lebanese,” Suleiman said. According to him, “the expats have the choice to vote either where they live [abroad], or in their town of origin in Lebanon, while the residents in the country do not have this privilege,” he added.

The calculation of a majority vote: The parliamentary session during which the MPs voted for the amendments to the electoral law was held six days after the president called on Parliament to reconsider the law based on his remarks regarding the date of the elections and the vote of expats.

Constitution Article 57 states that an absolute majority (50 percent plus one) of “all the members legally composing the chamber” is required if the head of state sends back a law for reconsideration in Parliament.

The required majority is therefore 65 of the 128 MPs, regardless of how many MPs have resigned or died. But Berri set the required majority at 59 MPs (out of 117) instead of 65 (out of 128). Hence, the amendment regarding the expats’ vote was adopted with only 61 votes.

However, 77 MPs (including Hezbollah’s MPs) voted earlier in favor of holding the elections on March 27. “The infringement of Article 57 is clear and could lead to the abolition of the text adopted on Oct. 28,” Suleiman said. He stressed that in this case, the electoral law of 2017 should apply.

Based on the political affiliations of the majority of the Constitutional Council’s members, the scenarios to be foreseen are political. This would explain the information that several sources reported recently on a barter in the making between the Amal-Hezbollah duo and the FPM.

Broadly speaking, this package deal provides for reviving the Mikati government after stripping Judge Tarek Bitar of the jurisdiction to pursue sitting MPs and ministers in the Aug. 4, 2020 Beirut port explosion probe, in exchange for the Constitutional Council accepting the Aounist party’s appeal to invalidate the amendments to the electoral law.

Here are the different scenarios that could present themselves:

• If the Constitutional Council accepts the entire appeal, all the amendments to the electoral law will be considered null.

• If the Constitutional Council accepts some of its clauses, Parliament will have to hold a session to amend the electoral law in light of the council’s decision.

• If the Aounists’ appeal is rejected, the amendments will be enforced. Therefore, the elections will be held on March 27.

Yet, the head of state is against this option. In an interview published on Nov. 19 in Al-Akhbar newspaper (which is close to Hezbollah), Michel Aoun said he will not sign the decree calling on the electoral bodies to convene unless the date is changed so that the ballot is held on either May 8 or 15.

“The President of the Republic is not bound to adhere to March 27 as a date for the elections. He can agree with the prime minister and interior minister on a date, as long as the constitutional deadlines are met. The important thing is to organize the elections before the parliamentary term expires [on May 21],” Suleiman said.

He concluded that the FPM’s appeal does not pose a threat to the holding of the legislative elections. Baroud shares the same opinion.

“There is no threat to the deadlines, whatever the Constitutional Council’s decision,” he said. If the Constitutional Council renders its decision on Dec. 17, the Interior Ministry will have an additional 10 days to publish the electoral roll for the March 27 elections and convene the electoral bodies 90 days before the date of expiry of the parliamentary term, pursuant to article 42 of the 2017 law.

The amendments that Parliament added to electoral law no 44 of 2017, on Oct. 19, were mainly designed to move up the legislative elections’ date from May 2022 to March. Yet, President Michel Aoun rejected this amendment, as well as other changes related to the voting of expats.Despite Aoun’s refusal, Parliament approved the text on Oct. 28. Then, the Free Patriotic Movement, led by Gebran...