Here’s what happened yesterday and what to expect today, Thursday, Dec. 2 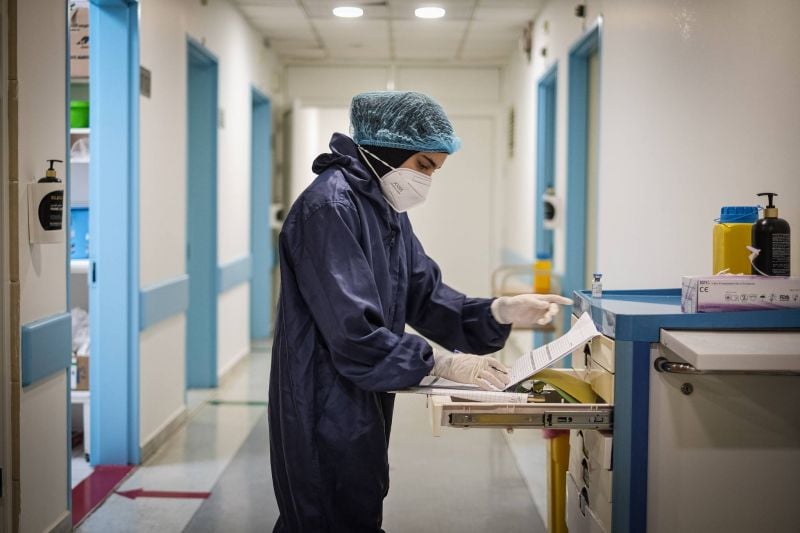 A nurse works in the COVID-19 unit of a Lebanese hospital. Officials have announced a raft of new COVID-19 measures. (Credit: João Sousa/L'Orient Today)

With the daily number of new COVID-19 cases exceeding 1,800 yesterday, the government’s health committee announced a raft of new measures aimed at curbing the coronavirus’ spread over the holiday season. A curfew from 7 p.m. to 6 a.m will be imposed between Dec. 17 and Jan. 9 on anyone who has not gotten at least one COVID-19 vaccination dose or a negative PCR test in the previous 48 hours, while from Dec. 10, patrons of touristic establishments, including hotels and restaurants, will be required to show the same documentation in order to enter. The committee also voted to make complete immunization mandatory for all public sector employees, as well as those in the education, health and tourist sectors, beginning Jan. 10. Separately, the Ministry of Public Works and Transport announced new measures for passengers arriving at the Beirut international airport beginning Jan. 1. From that date, passengers arriving in Beirut must register on the Health Ministry’s online portal, where they will submit vaccination and PCR data to receive a health pass that permits them to board a flight to Beirut. The health committee also agreed to extend the winter holidays for schools and universities by 10 days to give students time to complete the vaccination process before returning to the classroom. Last winter, Lebanon’s holiday season went ahead largely unimpeded by COVID-19 restrictions, leading to soaring infection rates in January, which precipitated a monthslong nationwide lockdown.

Nearly 14,000 applications from Lebanese expats who registered to vote in upcoming parliamentary elections were rejected by the Foreign Ministry. According to a statement released by the ministry yesterday, 13,976 applications from Lebanese expats who registered to vote on the platform were rejected because they did not meet the conditions stipulated for registration, or because of multiple registrations, and the expiration of the legal period to submit applications. “On midnight Saturday 20/11/2021 the number of registered voters on the platform and in diplomatic missions reached 244,442,” the statement says. It goes on to explain that until Tuesday, when the total number of registered voters reached 230,466, the ministry “[had] been sending the lists received from missions abroad to the General Directorate of Personal Status.” While this issue surfaced days after the registration deadline for the diaspora had closed, worries had surfaced during the registration process in which some raised questions about the platform’s data privacy protection after many of those who registered reported receiving calls from parties’ representatives days after they had submitted their details. The elections are now set to take place on March 27 with expatriates casting ballots for candidates in the constituency in Lebanon from which they hail, although the date remains a matter of dispute between different political blocs.

The long overdue launch of a registration platform for two social assistance programs took place yesterday, but funding for the government’s “ration card” program remains unsecured. At a ceremony to mark the start of registration for the World Bank-funded Emergency Social Safety Net program and a separate government ration card, Social Affairs Minister Hector Hajjar said, “these programs are not the solution, but are temporary support aimed at helping the Lebanese citizen survive and continue until an economic plan is developed with the determination and care of the government.” The World Bank’s regional director Saroj Kumar Jha told L’Orient Today yesterday that the government has now submitted a formal request to the Bank to fund the ration card and that “in principle, we are ready to consider the request” but that Bank officials would first want to see the ESSN program get up and running and for the government to partially fund the ration card from its own budget. Registration for the two programs will run through January, with the first payments to beneficiaries expected to go out in March. To register, visit https://daem.impact.gov.lb.

Joint parliamentary committees met yesterday to consider a draft of the capital control bill, but shortly after the session started, lawmakers postponed it again. The postponement was due to Deputy Prime Minister Saade Chami's revelation that discussions with the International Monetary Fund on the details of a capital control system are still underway, according to Deputy Parliament Speaker Elie Ferzli. The session, which was initially scheduled on Nov. 17, is now scheduled to take place next Monday.

The Électricité du Liban workers' union has announced a planned two-day sit-in today at all of the public utility's institutions beginning today. The union’s decision comes in response to the lack of renovations to the EDL Beirut headquarters following the 2020 Beirut port explosion and the increased powers granted to private electricity service suppliers “at the expense of the workers,” the state-run National News Agency reported. The union met with Energy Minister Walid Fayad on Nov. 15 to discuss the reconstruction of the headquarters, who he “promised the restoration would take place within days,” not weeks, according to the statement.

Want to get the Morning Brief by email? Click here to sign up.With the daily number of new COVID-19 cases exceeding 1,800 yesterday, the government’s health committee announced a raft of new measures aimed at curbing the coronavirus’ spread over the holiday season. A curfew from 7 p.m. to 6 a.m will be imposed between Dec. 17 and Jan. 9 on anyone who has not gotten at least one COVID-19...