The fallen falafel: Years of street-side rivalry end as one Sahyoun brother shuts up shop 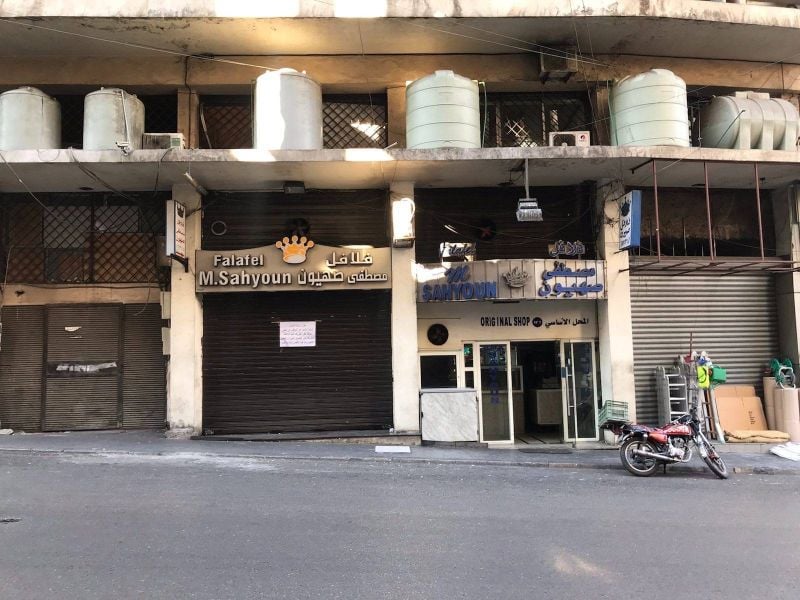 BEIRUT — On the path of the infamous Green Line that once divided the city, a rivalry has played out over the past 15 years between the falafel shops of two estranged brothers.

But that rivalry, for now, is over.

Late last month Beirut’s falafel aficionados found one of the two dueling Falafel Sahyoun shops along Beshara Khoury street shuttered and a sign hung on the door saying: “We announce to our valued customers our deep regret for a temporary closure due to the present circumstances in the country, which are known to all, hoping the conditions will improve for the better for the country and the people.”

The two shops, with practically identical signs and menus, owned and operated by two brothers who have not spoken to each other in years, have fed Beirutis in parallel for a generation, ever since Fouad Mustafa Sahyoun split off from his brother Zoheir in 2006 and opened a shop next door.

Since then, some have developed deep loyalties to one shop or the other, and passionate debates have taken place over which had the better sandwich.

“The falafel is not that different,” said Hassan Haffar, who used to go twice a week to Fouad’s shop while working in Beirut Souks, but has tried both. But Fouad “had this chili sauce that was so … chili, it was really tasty.”

Fouad’s son, Mustapha, said the business had been operating at a loss since the start of the economic crisis two years ago, and that the family had decided to close to limit further losses.

Falafel sandwiches that used to cost LL3,500 had more than quadrupled in price to LL15,000 before the closure, but it still wasn’t enough to keep up with spiraling costs. Making each sandwich cost the store LL20,000–40,000, Mustapha said, meaning a loss on each one sold.

With the electricity situation in the country disintegrating further from its already abysmal state, Fouad was forced to take two separate and costly generator subscriptions. He found two generator owners who had divergent schedules, hoping that when one turned off the other would turn on and power the refrigerators.

Mustapha said they were unwilling to substitute cheaper but lower quality ingredients and frying oil and also felt unable to keep increasing prices with customers facing their own financial problems.

The two brothers are famously vague about the exact circumstances that lead to the 2006 split after decades of co-owning and operating the single Falafel Sahyoun business in apparent peace.

With one of the two shops closed, Beirutis are mourning both a beloved falafel shop and the possible end of a local legend about the lengths stubbornness can reach.

Reflecting on their long history of food service, Mustapha said his family has “been always true and honest to the country, and the country never gave back. ”

The Falafel Sahyoun story began in 1933, according to Karim Sahyoun, Zoheir’s son. The founder, Mustafa Sahyoun, had been selling falafel from a street cart just outside downtown on Beshara Khoury before, that year, establishing the storefront that is still used by Zoheir, on the ground floor of a then-new building on Damascus Street.

For the next three decades Mustafa sold falafel using his signature recipe, which doesn’t include any parsley. Both brothers still use it to this day.

In 1968, Mustafa’s son, Zoheir, took over management of the shop and ran it for 10 years, Karim said. Fouad’s son, Mustapha, says his father, the eldest, started working with his grandfather first.

Zoheir did not agree to be interviewed for this article and Fouad’s son spoke on his behalf.

The shop closed a few years after the outbreak of Lebanon’s Civil War, in 1978, according to Karim’s website. Fouad remembers that they closed around the time of the first of Israel’s invasions during the war. The founder, Mustafa, also died that year.

By that time, Damascus Street had become a frontline dividing east and west Beirut, and few dared to cross Beshara Khoury street, knowing that snipers lay hidden on the rooftops nearby.

Mustafa’s two sons, Fouad and Zoheir, kept the business going, working out of a shop on Algeria street in Zarif, in what had become west Beirut.

The decision to keep going was born out of necessity, Mustapha recalls.

“It’s a daily business,” he said. “What you work every day, that’s what you make, that’s how you can survive, and that’s how you provide for your family.”

Following the Israeli invasion of 1982, and the subsequent siege imposed on West Beirut, they moved yet again, to the city’s east, in the area of Corniche al-Nahr. For a year and a half they remained on the east side. Mustapha remembers crossing the no-man’s land between west and east to work in the shop. A year and a half later, they returned to the west, where they remained until the end of the war.

In 1992, two years after the war ended, the brothers finally returned to the original shop on the former front line. The shop in Zarif was a second location until it closed in 2000, leaving the original store on Beshara Khoury as the only location.

But in 2006, the peace between the brothers broke. A dispute that no one seems interested in explaining in detail resulted in Fouad leaving the store and setting up shop in what Karim says was the original shop’s storage area, right next door.

Mustapha suggested that his father had higher standards than his uncle.

“When the partner decides to go a different route you say, ‘You know what? I don’t want to do business this way,’” he said. “We provide high-quality products for our customers. I don’t want to technically lower my grade or lower my expectations … This is one of the main reasons why they split.”

Karim, on the other hand, said the brothers were longtime partners who agreed on all things related to the business until “suddenly there were different points of view.” It was his uncle Fouad who wanted to separate, not his father, he said. The business Fouad created was a “copy-paste” of the one they shared, he added, and Karim was upset when it opened next door.

Fouad’s son, Mustapha, said the two brothers shared a single lawyer in their separation, which they initially thought would be amicable. They agreed that one of the brothers would keep the original 1933 storefront, while the other would take the name “Falafel Mustafa Sahyoun.”

In the end, Fouad moved to the storefront next door, and both kept the same name. The younger Mustapha said that his father sued his brother shortly after the split for allegedly infringing on his exclusive right to the name, and the court case is still ongoing some 15 years later, their lawyer who handled the separation having died in the meantime.

In 2012, Karim took his years of experience under his father’s tutelage and opened the first Falafel Karim Sahyoun. Unlike the two rivals in Beshara Khoury, Karim’s business operated on a franchise model, leading to a chain of about 20 shops across Lebanon, the UAE, Qatar, Iraqi Kurdistan and France.

Asked how his father and uncle feel about still more Sahyoun family falafel shops popping up around the city, the country and now the world, Karim said his father was proud of him. He hasn’t spoken to his uncle in years.

The closure of Fouad’s shop hasn’t led to any thaw in the frosty relationship, Mustapha says.

Karim agreed. The two sides haven’t spoken since 2006 and that isn’t changing now, he said.

Asked about the closure of Fouad’s shop Karim said, “Look, I’m upset about every business that closes in Lebanon. There’s nothing specific. But the news didn’t surprise me because the whole country has become tired. Even us, the prices we are currently selling at, we are not making money.”

In an Instagram post following Fouad’s closure, Karim’s company issued a statement reminding people that they are separate: “It is important for the Falafel Karim Sahyoun restaurant chain to make it clear to the public that the shop that was closed due to the stifling economic crisis that Lebanon is going through has nothing to do with it or with the original store that still receives its customers and operates as usual since 1933.”

Asked about the growth of the Falafel Sahyoun brand on the other side of the family, Mustapha said, “It’s not only the name that makes it. It’s also the quality of the product and the service.”

It’s not clear what the future holds for the various falafel businesses of the Sahyoun family. Zoheir and Fouad must eventually retire, and Karim says he is ready and able to take over his father’s shop when the time comes. Fouad’s son, Mustapha, says they are considering their options for the future, but his father’s retirement is still a ways off.

For now, Zoheir’s shop is without its twin, a metal curtain pulled down over his brother and rival’s storefront. But Mustapha swears they’ll be back.

BEIRUT — On the path of the infamous Green Line that once divided the city, a rivalry has played out over the past 15 years between the falafel shops of two estranged brothers.But that rivalry, for now, is over.Late last month Beirut’s falafel aficionados found one of the two dueling Falafel Sahyoun shops along Beshara Khoury street shuttered and a sign hung on the door saying: “We...