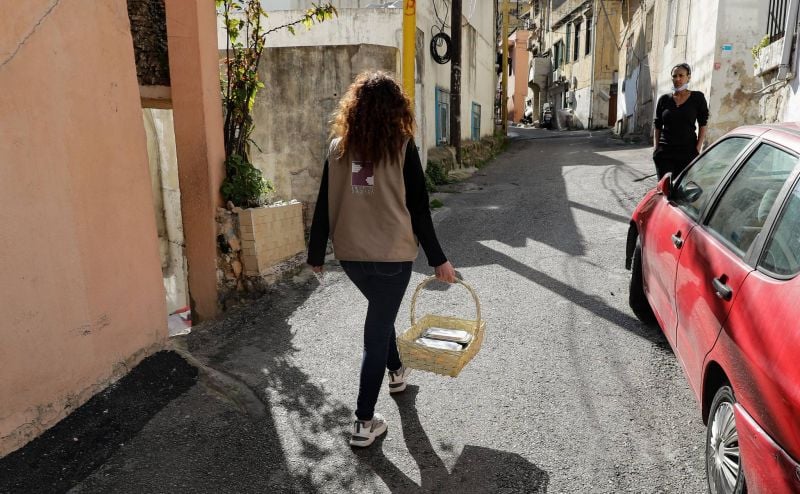 With the dramatic rise n fuel prices, cash assistance is more vital than ever for the country's most needy households. (Credit: AFP)

BEIRUT — As a dramatic spike in the price of fuel accompanying the phasing-out of import subsidies sparked protests and calls for strikes around Lebanon in recent days, two long-awaited programs to counterbalance the social impacts of the subsidy program’s end remain on hold.

Officials announced Thursday that the law authorizing a $246 million World Bank-funded social assistance program will go back to Parliament to be amended next week.

The Emergency Social Safety Net loan, the centerpiece of which is a cash assistance program for needy households, was approved by the board of the World Bank in January. The monthslong delay in its implementation since then was, in large part, due to changes that were made to the loan agreement by the previous government and passed by Parliament without the approval of Bank officials.

Meanwhile, a separate government cash assistance program, the so-called “ration card,” a planned $556 million cash transfer program the launch of which was announced with much fanfare by officials in the outgoing government of Hassan Diab last month, has also been delayed, amid questions about funding and eligibility criteria.

Registration of potential beneficiaries, which was supposed to have started on Sept. 15, has not yet begun. The delays in the program have drawn an outcry in particular since the cost of gasoline rose to more than LL300,000 per 20 liters this week, amounting to nearly half the monthly minimum wage.

“The whole point of the ration card program was that people would be given money simultaneously when the subsidies get lifted,” General Confederation of Lebanese Workers head Bechara al-Asmar said Wednesday at a press conference in which he criticized the "chaotic lifting of subsidies" without the ration card program or other social assistance programs being in place.

Assem Abi Ali, a former Social Affairs Ministry official who had taken a lead role in the discussions to develop the ration card program, told L’Orient Today, “In my own opinion, the reason for the delay is not technical, it is maybe political.”

Social Affairs Minister Hector Hajjar, via a spokeswoman, declined to comment on the reasons behind the delays in the social assistance programs beyond a statement announcing that he had submitted the “required amendments” to the ESSN law to Parliament Speaker Nabih Berri and that they would be discussed at a Parliament session next Thursday.

A source in the Grand Serail who spoke on the condition of anonymity said the government ration card had been delayed by questions about the eligibility standards and the registration platform and funding for the program.

“You know when you talk in theory about implementing the program, it might sound great but when you actually do it, you find lots of unresolved issues with the procedure that need to be dealt with,” she said.

Regarding the ESSN program, Hajjar’s office also declined to elaborate on what the proposed amendments were, but World Bank officials told L’Orient Today that that some of the terms to be changed related to salaries for program staff — which under the current law, are capped at LL7 million, or about $350 at the current market rate — and the funding allocated for the third-party monitor, both of which Bank officials had said were inadequate.

Increasing the budget items “doesn’t mean the government can hire left and right … but it gives some flexibility in hiring for the right qualifications and the right kind of people that meet the qualifications,” said Haneen Sayed, lead social protection specialist with the Bank.

The amended law will also stipulate that program expenses may be paid either in dollars or lira as agreed upon by the government, the central bank and the World Bank. The original law required all program expenses, including aid payments to beneficiaries, to be paid in lira, which had been a point of contention between the World Bank and the government.

In addition to the amendments that are set to be considered by Parliament, Sayed said, before the funding can be disbursed, the government still needs to finalize contractual agreements with the World Food Program, which will manage the cash transfers, and with the third-party monitoring agency that will make sure the program complies with requirements.

Although the ESSN and ration card are two separate programs, registration for both of them will be done through the same system, via the Impact platform, which was also used for registration in the government’s COVID-19 vaccine program and is under the oversight of Central Inspection. Based on the characteristics of each applicant, they may then be placed into either the ESSN or ration card program.

Ultimately, Sayed said, “A fresh database will be created, a national one for Lebanon. It is essentially what will become the social registry and then as you go along you will build it up further and further and you will do more linkages with other databases.”

The World Bank is currently only funding the ESSN program, while the government will be responsible for finding funds for its own ration card program. How it will do so remains an open question.

The Grand Serail source said, “We are hoping that between the time we launch the registration and the time we have to give the money, the funding for the program will be secured.”

Asked when the program might be operational, she demurred.

“If I give a date, something might happen that ruins the process of the program, since that’s always a possibility, so I prefer to say the date is ‘soon,’” she said. “Let’s also be optimistic about the funding of the ration card. Hopefully, when we launch the program we will find donors that are willing to contribute.”

At the press conference announcing the launch of the ration card program, government officials had expressed optimism that the World Bank would finance the ration card in addition to the ESSN, but there appear to be no immediate prospects of this.

The government has not submitted a formal request to the Bank to fund the program, World Bank regional director Saroj Kumar Jha said.

“In any case, we cannot consider giving financing for any [other] program unless the ESSN moves into disbursement,” he said. “If ESSN moves into disbursement and the government is prepared to cancel or reprogram existing projects, we would be happy to consider the government’s request for financing the ration card program provided its design and implementation modalities are satisfactory to the Bank.”

Regarding the projected date when the program could be up and running, Jha said, “We would like to start disbursing it yesterday. … It’s already been nine months since the project was approved by our board of directors, and [Lebanese officials] really need to move very fast.”

BEIRUT — As a dramatic spike in the price of fuel accompanying the phasing-out of import subsidies sparked protests and calls for strikes around Lebanon in recent days, two long-awaited programs to counterbalance the social impacts of the subsidy program’s end remain on hold.Officials announced Thursday that the law authorizing a $246 million World Bank-funded social assistance program will...