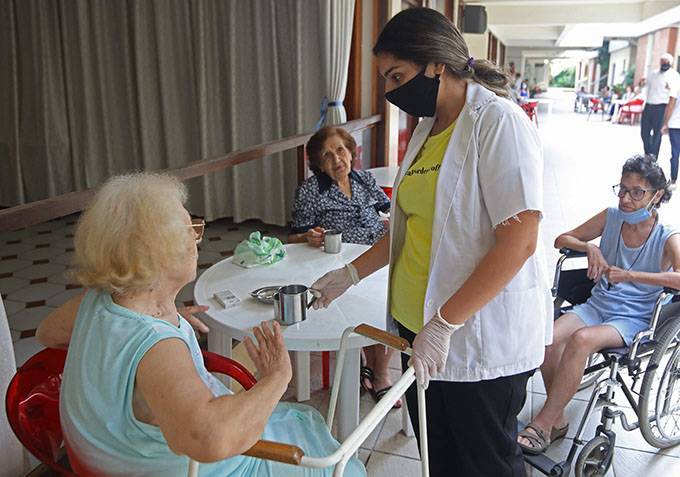 Almost all of Lebanon’s care homes have been hit by the unprecedented and acute crisis that has beset the country. Today, as studies focus on the long-term consequences of the country’s ongoing brain drain, the elderly population, a more vulnerable and dependent group, has been overlooked.

As the crisis worsens, the number of residents in care homes, especially those that are almost free of charge, continues to rise, while NGOs providing assistance for the elderly are overwhelmed by demand amid shortages of basic goods, including fuel, and concerns about power outages as winter approaches.

Commenting on the challenges that lie ahead, Souheil Chmaiteli, who runs Dar El Ajaza Al Islami, a care home in Beirut, says, “I can’t predict anything.”

“In Lebanon, we cannot even tell what tomorrow will bring. … It is difficult to make plans or to be sure about anything in such a situation. We are struggling to survive at present,” he says.

Chmaiteli is pessimistic because for more than a year now he has seen the crisis only worsen, and shortages become increasingly frequent.

Maya Ibrahimchah, the founder of Beit el Baraka, an NGO that in January 2019 opened a free supermarket to aid elderly residents who cannot afford food and also provides home renovation and medical services, says, “Representatives of care homes sometimes reach out to us for food, diapers and even medicine assistance.”

“Beit el Baraka is holding out for now because we produce our own food as much as possible, owing to partnerships we have built with local and international firms and NGOs. But it is mainly thanks to the diaspora that is enabling us to avoid shortages, by providing us with medicines, for example,” she says. She explains that this is what allows her association to help care homes that seek their assistance.

It is such valued support from the diaspora that has enabled the organization to keep its services going without having to substantially increase its fees, even though the Social Affairs Ministry suspended its financial support to registered NGOs more than two years ago.

“We have 450 seniors,” Chmaitelli says. “Most of them reside [here] at the ministry’s expense, but more and more applications for admission are being submitted, which shows that the crisis was coupled with a significant change at the cultural level,” he says, referring to the fact that for many Lebanese, placing their elderly relatives in a care facility has been a last resort.

“Some Lebanese no longer have the financial means to take care of their parents, while others are abroad and are forced to place them in care homes, where professionals can take care of them,” he explains.

However, not all seniors end up in care homes via the same route. Some seniors find themselves living on the streets before benefactors find them and secure housing for them in specialized centers, like Beit Jdoudna (“our ancestors’ home”), an NGO hosting some 35 seniors, many of whom were previously homeless or living in extreme poverty.

The NGO, which enables its residents to lead a “normal” lifestyle thanks to workshops, vegetable patches and other activities, has also experienced a sharp increase in its number of residents.

“The number of residents has almost multiplied by two in six months. It increased from 18 to 35 residents in our four care homes,” says Yara Bou Aoun, Beit Jdoudna’s founder.

The increase in the number of residents presents Beit Jdoudna with another significant challenge, similar to that encountered by many other care homes, especially those located in the mountains: the cold weather. In light of countrywide diesel shortages and prolonged power cuts, these institutions already fear the coming of winter.

“We are based in Beit Mery [Mount Lebanon], which is cold in winter. We will need diesel and electricity to heat our four centers. Seniors are like children. Their bodies are unable to tolerate the cold, and it is easier for them to get sick. Hence, we are counting on our friends in the face of this situation, but I am not sure if it will be enough,” Bou Aoun says.

This is only one of many challenges facing Beit Jdoudna, which is required to do more with less.

“Donations cover only 10 percent of the product costs that they covered a year ago, ” Bou Aoun explains.

Similar to the many NGOs that take care of the less fortunate, Beit Jdoudna cannot rely on the state’s support.

“We have been knocking at the doors of the Ministry of Social Affairs for months to obtain financial support set at LL15,000 per resident per day, but to no avail,” Bou Aoun says. “To be honest, I don’t expect anything from the Lebanese state,” she adds.

Chmaitelli says he feels “alone and outcast” in the face of this crisis. “Nobody is able to lend us a helping hand,” he adds.

Ibrahimchah says, “Lebanon is one of the few countries that has no actual pension scheme. The elderly population is totally left behind. Individuals find themselves forced to take the reins through private initiatives.”

This article was originally published in French in L’Orient-Le Jour. Translation by Joelle El Khoury

Almost all of Lebanon’s care homes have been hit by the unprecedented and acute crisis that has beset the country. Today, as studies focus on the long-term consequences of the country’s ongoing brain drain, the elderly population, a more vulnerable and dependent group, has been overlooked.As the crisis worsens, the number of residents in care homes, especially those that are almost free of...