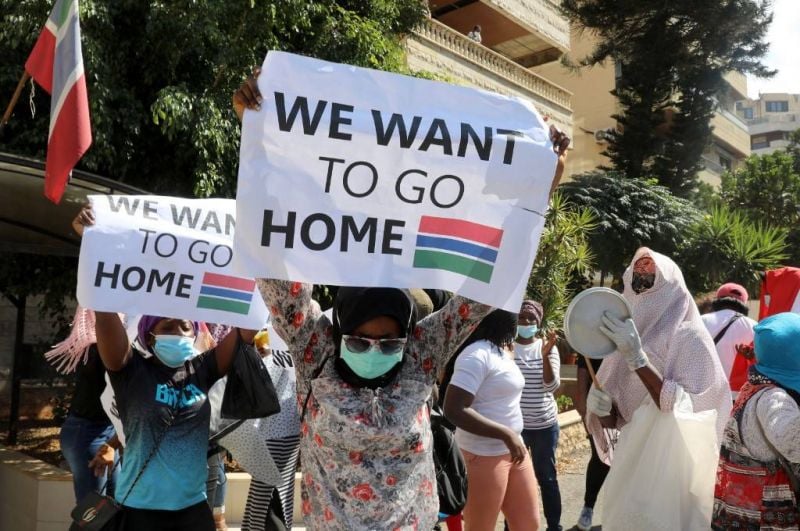 Migrant workers protest in front of the Gambian consulate in Beirut shortly after the Aug. 4, 2020, port explosion. (Credit: Anwar Amro/AFP)

BEIRUT — Tigets last saw her son when he was 2 years old, before she left Ethiopia to find work in Lebanon that would allow her to support him.

That was four years ago. In the beginning, the separation seemed like a worthwhile sacrifice.

“Two years ago, I was able to send my family a lot of money and I was happily living and working here,” said the 42-year-old domestic worker, who asked that her last name not be published.

But now, crisis-stricken Lebanon has become a purgatory where she is stuck, unable to make money to pay her son’s expenses and unable to go home to him.

Tigets’ employer, a real estate agent, tells her he has not been paid in a year and a half and is thus unable to pay her salary, which used to be $400 a month. Her work contract ended a year ago, so technically she is free to go, Tigets said, but she can’t afford to send money to her mother to pay for school supplies for her son, much less to buy a plane ticket.

“I am stuck here,” she said. “I also know the situation and crisis my employer is passing through, but right now, Lebanon is a prison to me.”

Repatriation had become a growing demand among migrant workers in Lebanon since the country’s sprawling economic crisis began two years ago, particularly after hundreds were abandoned by their employers, tossed out in front of their consulates, often with no money, food or even their official documents.

However, a number of obstacles stand in the way of many people’s ability to return, including ticket prices, unpaid previous salaries and official documents that are withheld by employers.

Another Ethiopian woman, who asked not to be named, told L’Orient Today that her employers had kicked her out because they can no longer afford to pay her salary, “I am not able to buy tampons or pads, and I can’t even afford to buy basic food. I try to sleep most of the time so that I don’t have to through feeling starved,” she said, explaining that she is currently staying with friends.

“I want to go back to my country so that I can try and find a job somewhere else … anywhere but here,” she said.

Before the economic crisis, there were some 200,000 migrant domestic workers in Lebanon. Under the country’s kafala, or sponsorship, system, these workers are tied to a specific employer and do not have the same rights as other employees under labor laws.

While it is not clear how many workers have left Lebanon since the crisis began, a survey of more than 1,000 migrant workers in Lebanon conducted by the International Organization for Migration earlier this year found that nearly half wished to return home.

Zeina Mezher, the national project coordinator at the International Labour Organization’s Beirut office, told L’Orient Today that since the economic crisis in Lebanon, there has been a rise in exploitative tactics such as non-payment of wages, unjust dismissal or breach of contract by employers.

Many migrant workers have been struggling to find a way out of Lebanon, she said. But even if they had the funding to buy a plane ticket, she noted, many workers do not have access to their own passports, which are commonly confiscated by employers.

Another issue is that many migrant workers have overstayed their residency permits in Lebanon and face potential legal consequences if they try to leave.

Some embassies, NGOs and international organizations have stepped in to help in evacuating the stranded workers. Recently, the Philippine Embassy announced that it had evacuated 280 workers from Lebanon, most of whom were “undocumented and distressed.”

Back in July, 20 Ethiopian women were sent back home with their travel expenses covered by Egna Legna Besidet, a Lebanon-based Ethiopian migrants’ rights organization, along with the IOM. Many of the women had been victims of harassment and abuse in their workplaces, the organization said, and four of them had been in prison when the NGO intervened.

“We are trying to help these women as much as we can, the Ethiopian Embassy hasn’t done much, but maybe this is because they were not able to give funds for it,” said Banchi Yimer, the founder of Egna Legna Besidet.

Ethiopian Consul General in Lebanon Temesgen Oumer disputed Yimer's characterization. According to a report issued by the consulate in Beirut for the year ending June 30, 2021, which he provided to L'Orient Today, the consulate had facilitated the repatriation of 5,713 Ethiopian workers from Lebanon between June 2020 and June 2021, including through assisting in legal cases, mobilizing funding for 1,368 tickets in coordination with the ILO, IOM and charitable organizations — including Egna Legna — and issuing 5,260 travel documents, for which Oumer said the usual $50 fee was waived, as well as providing shelter to 935 workers for on average four months while they were awaiting repatriation.

Despite the efforts of the various parties to help workers return, Yimer said, “There are still many women who are trying to leave but can’t because their employers are not paying for their tickets, or not giving them their salaries, and every month these cases are gradually increasing."

“My only hope is that we can continue receiving funds to be able to help as many women as we can.”

Yimer told L’Orient Today that in many cases, lawyers have stepped in to help pressure employers to either pay the workers’ salaries or return their documents.

In 2020, then-caretaker Labor Minister Lamia Yammine issued a new unified labor contract that was hailed as a step forward on migrant workers’ rights. The new contract would have allowed workers to terminate their contract without the consent of their employer at a month’s notice, guaranteed them the national minimum wage and explicitly forbidden employers from confiscating workers’ passports.

However, amid pushback by worker recruitment agencies, the Shura Council, the country’s top administrative court, blocked the implementation of the contract.

Progress on reforms was also stymied by the lack of a fully empowered cabinet for more than a year, from August 2020 until now. A new government was formed on Friday, but is awaiting a confidence vote from Parliament.

“With the new government, we hope that the new minister of labor would not just push for a new, humane system regarding domestic migrant workers,” said Diala Haidar, Amnesty International’s campaign officer in Lebanon, but also that authorities properly implement any new regulations.

In the meantime, while reforms are pending, Haidar said, “The Lebanese judiciary, the government and authorities have a duty to protect these workers, and send them back safely to their homes.”

Althea, a Filipina domestic worker who is currently working at a coffee shop in Lebanon, is one of the lucky ones who are getting out. After 11 years in Lebanon, she will be leaving in two weeks; her employer paid for the ticket. But the prospect is bittersweet.

“This is making me feel very strange, because during the last 11 years I have never visited the Philippines, as all my family members have died,” she said. “I will not feel ‘at home’ there, and I don’t feel ‘at home’ here either.”

This article has been updated to include a response from Ethiopia's consulate general in Lebanon. L'Orient Today had been unable to reach consulate officials for comment at the time of initial publication.

BEIRUT — Tigets last saw her son when he was 2 years old, before she left Ethiopia to find work in Lebanon that would allow her to support him.That was four years ago. In the beginning, the separation seemed like a worthwhile sacrifice.“Two years ago, I was able to send my family a lot of money and I was happily living and working here,” said the 42-year-old domestic worker, who asked that...