How was the Mikati government born? 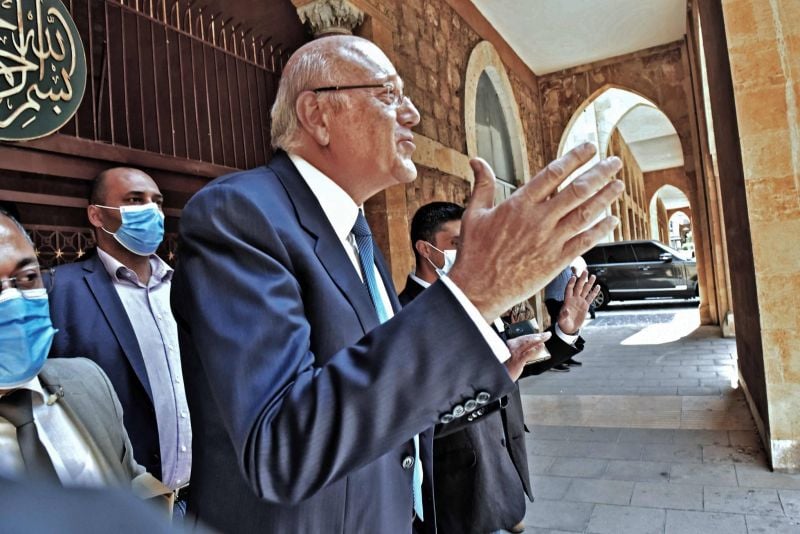 Premier Najib Mikati is seen on Sept. 10, hours before the announcement of a new cabinet’s formation following a 13-month political vacuum. (Credit: AFP)

Everything happened behind the scenes, as has always been the case in Lebanon.

Right up to the day it saw the light on Friday, Prime Minister Najib Mikati’s cabinet had been the subject of several negotiations unfolding in Beirut, Baghdad, Tehran, Washington and Paris.

Following 13 months of deadlock, strong external pressure made it possible to reach a local and regional compromise. Not that the government formation was a major international issue, but all stakeholders wanted to see a breakthrough in the situation as part of a regional bargain.

“It is the Macron-Raisi government,” says a Gulf diplomat who is closely watching the situation in Lebanon.

According to Lebanese sources, French President Emmanuel Macron’s visit to Iraq on Aug. 29 played a major role in breaking the cabinet formation deadlock.

During the Baghdad summit, which was aimed at easing regional tensions, Macron purportedly approached new Iranian Foreign Minister Hossein Amirabdollahian and invited him to visit Paris.

According to diplomatic sources who attended the summit, Macron expressed France’s desire for close cooperation with Iran, in Lebanon particularly, and Paris’ willingness to invest in both Iran and Iraq.

Not long after, the French multinational oil and gas company Total signed a $27 billion deal with the Iraqi government, in which pro-Iranian factions wield significant influence.

A week later, the French president spoke with his Iranian counterpart, Ebrahim Raisi, who reportedly assured him that Tehran would spare no effort in helping form a government in Lebanon. The project’s halfway mark was already reached.

Hezbollah ‘key’ in breaking the deadlock

From there, things were fast-tracked.

“We have been closely following all these developments,” says a close associate of Mikati, who the source said “knew how to seize the opportunity.”

“The Americans have also played a positive role,” he adds, stressing that Washington wanted to prevent Lebanon from descending into further chaos.

On the local scene, meanwhile, having received the green light from its Iranian patron, Hezbollah buckled down to finalize a compromise among the key formation actors.

Several meetings took place between Mikati and Hussein Khalil, Hezbollah Secretary-General Hassan Nasrallah’s political assistant, who said that the Shiite party would make every effort to facilitate the government’s birth.

The influential Maj. Gen. Abbas Ibrahim, General Security’s director-general, who is close to Hezbollah, also joined the party, acting as a mediator in the talks.

France was not to be outdone. Paris was still clinging to its initiative and wanted a government to see the light of day at all costs, as French diplomats have bent over backwards for the formation.

According to a member of Mikati’s team, two days before the cabinet’s formation the premier received a call from Bernard Émié, the head of France’s Directorate-General for External Security and a former ambassador to Lebanon, who is said to be close to the Tripolitan billionaire.

Émié insisted that a government be formed, stressing the need to make concessions on the cabinet formation’s prerequisites, and for Mikati to set aside the issue of the so-called blocking third effective veto power, which President Michel Aoun’s opponents had accused him of trying to retain during previous government negotiations.

“Émié assured us that anyway Aoun could do nothing with his blocking third as the government will only last a few months, until the parliamentary elections take place in the spring of 2022,” Mikati’s source adds.

Several sources confirm that French pressure was very strong on Lebanese actors to form a cabinet , and communication with Mikati is ongoing.

Meanwhile, the US Ambassador to Lebanon, Dorothy Shea, “called Michel Aoun twice in the two days before the signing of the ministerial statement in Baabda on Friday to assure him that Washington was in favor of the government formation,” a Western diplomat says.

Washington also made an exception to its sanctions on all parties trading with Syria under the Caesar Act by allowing Lebanon to import Egyptian gas via Jordan and Syria through the Arab Gas Pipeline.

This decision came immediately after Nasrallah announced that a diesel shipment would set sail from Iran to Lebanon to help alleviate the country’s crippling fuel shortages.

Last week, a Lebanese delegation traveled to Damascus in a rare visit to discuss the matter, and a meeting was also held in Amman, all under Washington's approving gaze.

Undoubtedly, these external factors played a decisive role in the cabinet’s birth.

“Overall, Western ambassadors are relieved to see that things are finally going in the right direction,” the Western diplomat says.

According to the diplomat, the International Monetary Fund is satisfied with Saade Chami, a 20-year IMF veteran, as deputy prime minister and with Foreign Minister Abdallah Bou Habib, who served as a World Bank adviser.

The Americans have welcomed the choice of Economy Minister Amin Salam, who is close to Washington. Meanwhile, the French consider that they still have the largest number of ministerial allies, namely, the Agriculture Minister Abbas Hajj Hassan and Energy Ministry Walid Fayad.

Bassil negotiated the names of each minister

While foreign powers carried the baton across the cabinet formation's halfway point, the other half of the race was accomplished at home.

“Gebran Bassil intervened in the smallest details,” says a Lebanese politician who was following up closely on the formation negotiations.

The president’s son-in-law was conducting parallel talks with Moustapha al-Solh, Lebanon’s consul in Monaco and the son-in-law of Taha Mikati, the prime minister’s brother.

Paris was said to have welcomed Solh’s intervention, as he is seen close to French diplomatic circles.

An agreement was thus reached whereby a Christian minister would be slipped into “Mikati’s share” in the government and another Sunni minister into the president’s share.

“Bassil negotiated and endorsed the names of each minister, particularly Georges Khallas, the minister of youth and sports, and Najla Riachi ..., the minister of state for administrative development, both Christians and ostensibly independent,” the Lebanese politician says.

As for Tourism Minister Walid Nassar, some consider him to be close to Bassil and part of the president’s cabinet share, but Mikati’s camp affirms that Nassar is aligned with the prime minister and maintains strong family relations with him.

Bassil is said to have called for certain guarantees, fearing that a coalition would form within the government against Aoun.

“He is afraid that the Mikati-Berri-Joumblatt-Frangieh quartet would try to isolate the president,” a close associate of the Free Patriotic Movement leader says.

Hezbollah, however, reassured Bassil in this regard, telling him that the two [independent] Christian ministers are his “guarantee.”

The vagueness surrounding the actual affiliation of some of the new ministers makes it difficult to analyze the balance of power within the government.

The FPM appears satisfied with the new ministerial team, and many party members confirm behind the scenes that Bassil is happy with the final product.

But what about the blocking third veto power? “We prefer not to talk about it, but we have nothing to complain about at this point,” a source close to Bassil says.

“Nobody retains the blocking third veto power, otherwise Berri would have not endorsed the government,” an adviser to the prime minister says.

The Parliament head had his doubts about this until the very last minute. On the day the cabinet was formed, he reportedly called his right-hand man, MP Ali Hassan Khalil (Amal/Marjayoun-Hasbaya), to make sure that the cabinet lineup was still the same and that no names were changed.

“Things will be clearer after Parliament’s vote of confidence. Some pitfalls could, however, emerge later,” the politician who followed up closely on cabinet negotiations says.

For now, it appears as a win-win situation.

“Bassil emerged as the kingmaker; [PSP head Walid] Joumblatt has not lost or gained anything and maintains his neutrality. Berry was able to impose the name he wanted for the Finance Ministry, and Mikati is looked at as the great savior,” the politician concludes

Everything happened behind the scenes, as has always been the case in Lebanon.Right up to the day it saw the light on Friday, Prime Minister Najib Mikati’s cabinet had been the subject of several negotiations unfolding in Beirut, Baghdad, Tehran, Washington and Paris.Following 13 months of deadlock, strong external pressure made it possible to reach a local and regional compromise. Not that...