The parliamentary blocs of Speaker Nabih Berri, Hezbollah and the Future Movement signed a petition to initiate parallel proceedings to investigate the Beirut port explosion before the Supreme Court. 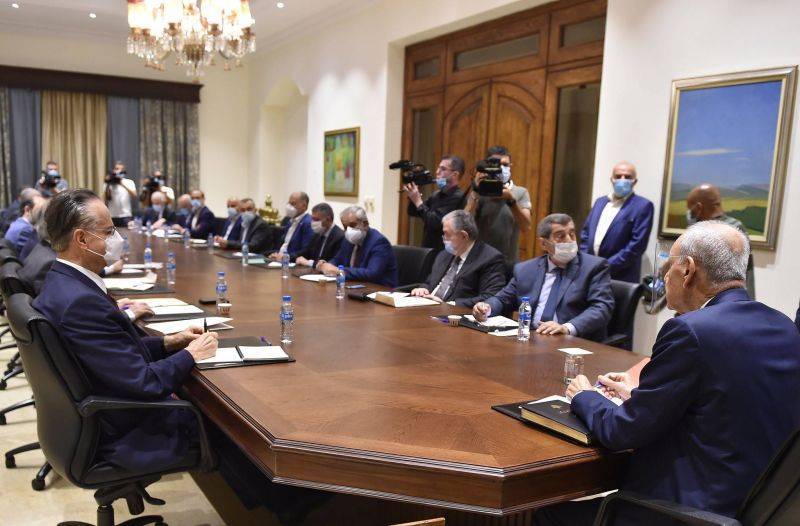 Nabih Berri presides over a meeting on July 10 of the Parliament Secretariat and Parliament’s Administration and Justice Committee. (Credit: Hassan Ibrahim)

As expected, several Parliament members, three of whom were called for questioning in the case of the deadly Aug. 4 Beirut port explosion, are bending over backward to get off the hook.

But the Machiavellian ways of some MPs seem to have yielded results.

At least, that’s what some 26 MPs from these three blocs believe. The Amal Movement, Hezbollah and the Future Movement have signed a petition to launch procedures whereby Parliament would interrogate the sitting MPs and former ministers, Nohad Machnouk, Ali Hassan Khalil and Ghazi Zeaiter, as well as former minister Youssef Fenianos — all of whom were called for questioning by the blast probe's lead investigator Tarek Bitar.

Parliament is therefore preparing to go on the offensive and will seek, once more, to circumvent the judiciary in this major case.

The decision to sign the petition came after a meeting of parliamentary committees on July 10 during which MPs failed to decide on Bitar’s request to lift immunity from the top officials.

In a bid to justify their procrastination, they asked Bitar to provide them with the documents on which he based his decision to question the four former ministers and evidence that suggests their implication in the devastating blast.

The investigative judge refused. According to the law, he has the right to submit a summary of the facts only, which he has already done.

“The judge cannot simply provide Parliament with the evidence he holds or the witnesses’ names,” a judge, who requested anonymity, said indignantly.

Bitar’s refusal has, however, served as an ideal excuse for Parliament to escape forward. In fact, Deputy Speaker Elie Ferzli has gone as far as to accuse the lead investigator of “politicizing the case.”

“Tarek Bitar has not shown objectivity in his work. He dealt with us as if he had a political agenda,” Ferzli told L’Orient-Le Jour.

Within 10 days, Parliament is set to decide, by a majority during a plenary session, whether or not to set in motion the procedure laid down in Article 70 of the constitution, in the hope of circumventing Bitar.

Article 70 stipulates that Parliament has the right to question the prime minister and ministers who are accused of high treason or of serious breach of their duties — a decision that can only be taken by a two-thirds majority of MPs present during the meeting.

This vote, however, is a “long shot,” according to Wissam Lahham, an expert on constitutional law and a university lecturer, since several other parliamentary groups have already expressed their opposition to such a step.

“It must be seen if this procedure applies in relation to the breach of duties provided for in Article 70,” Lahham said.

Nizar Saghieh, the head of Legal Agenda, recalled that Bitar spoke of “intentional crime” and not negligence in the performance of duties.

“Therefore, Article 70 does not apply,” he said, adding that the Parliament initiative would be “an encroachment on the judiciary and a violation of the principle of separation of powers.”

Even though the parliamentary blocs of the Free Patriotic Movement, the Progressive Socialist Party and the Lebanese Forces refused to sign the petition — simply refusing to bypass Bitar’s investigation — the two uncompromising Shiite parties backed by the Future Movement were quick to go on the offensive by signing the petition.

According to corroborating sources, the Amal Movement — two key figures of which face accusations — was behind this maneuver.

For some analysts, the head of the Future Movement Saad Hariri wanted to return the favor to Berri who had supported him in his long standoff with President Michel Aoun over the formation of the government.

Among the petition signatories, one ought to mention Ali Khreis, Mohammad Khawaja and Qassem Hashem from the Amal bloc; Mohammed Hajjar, Dima Jamali and Tarek Merehbi from the Future Movement bloc; and Ibrahim Mousawi and Hassan Ezzedine from Hezbollah.

“The most absurd thing is the fact that the signatories of the petition will decide to question members of their own bloc, acting as the judge and the accused at the time,” Saghieh quipped.

The port investigation is not the only reason behind the MPs’ keenness on clinging to the petition, so too is the very principle of immunity.

“If immunity is lifted in relation to the port investigation, this will be a precedent and could snowball in corruption cases,” Saghieh explained.

According to him, this explains why the Future Movement threw its weight behind the petition, as it might later have to face the same dilemma in relation to accusations of misuse and squandering of public funds.

If Parliament approves this procedure, an investigative committee would be set up to begin investigations. Such a “committee will not be held to any time frame to finish its report,” Hadi Hobeich, of the Future Movement, told L’Orient-Le Jour.

The investigations could drag for an indefinite period of time before being voted on by a two-thirds majority at Parliament in order to be transferred to the Supreme Court.

“This is a real scam and heresy. We will be witnessing two investigations taking place at the same time. It should not be forgotten that Bitar’s jurisdiction was provided for in a ministerial decree,” Hadi Rached, a lawyer and academic, said.

For Saghieh, the most worrying part is that MPs are ready to do everything to create confusion by resorting to procedural contortions and complex techniques to drive attention away from the main cause.

Ferzli, for his part, insisted that MPs are doing nothing but their “constitutional duty.”

Commenting on why MPs did not take this decision earlier, even when the previous lead investigator Fadi Sawwan, who was pushed to recuse himself, levelled accusations against almost the same officials, Ferzli said, “It is simply because we did not want the public opinion to think we want to hide the truth.”

As expected, several Parliament members, three of whom were called for questioning in the case of the deadly Aug. 4 Beirut port explosion, are bending over backward to get off the hook.But the Machiavellian ways of some MPs seem to have yielded results.At least, that’s what some 26 MPs from these three blocs believe. The Amal Movement, Hezbollah and the Future Movement have signed a petition...